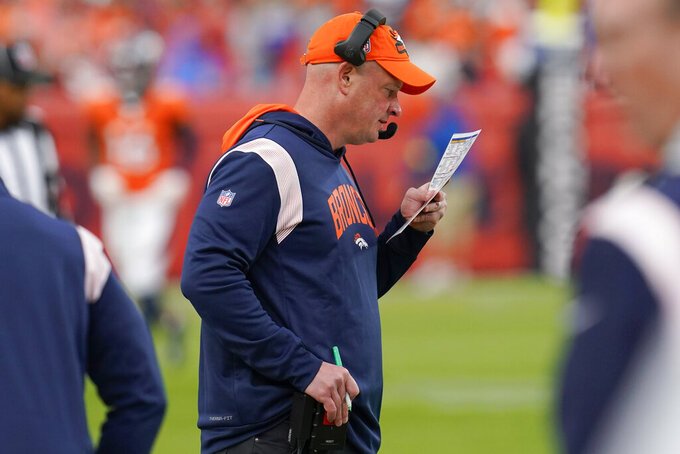 Denver Broncos head coach Nathaniel Hackett looks at a play list on the sidelines during the second half of an NFL football game against the New York Jets, Sunday, Oct. 23, 2022, in Denver. (AP Photo/Matt York)

DENVER (AP) — In a season that has gone sideways, Denver Broncos rookie head coach Nathaniel Hackett is willing to bench just about anyone to shake things up.

That includes himself as the play-caller of the league's lowest-scoring team.

“I think we'll always look at everything,” Hackett said after the Broncos (2-5) wasted another dominant defensive performance in a 16-9 loss to the New York Jets on Sunday.

With backup quarterback Brett Rypien filing in for an injured Russell Wilson, the Broncos again struggled to find the end zone, which they've done just eight times in seven games.

It's become an all-too-familiar theme for the Broncos, who are averaging just 14.3 points per game. That has Hackett at least entertaining the idea of handing off the play-calling duties to focus on the bigger picture.

“I always look at myself, first and foremost,” Hackett said. “If there’s something that we all agree that I might hold the team back or anything like that, sure. But I don’t think that’s the case.”

Still, he added: "We’ll always look at everything to try to improve and help this offense.”

Only a few months on the job and Hackett might already be feeling the heat. The new ownership group hasn't publicly addressed the early season struggles of Hackett and Wilson, who's off to the worst start of his 11-year career and missed a game Sunday for just the fourth time as a pro.

Hackett's first season has been marked by a series of head-scratching decisions (a 64-yard field goal attempt late in a season opening loss at Seattle) and turnovers (a muffed punt last Monday night in overtime that set up the Chargers' game-winning field goal).

Lose next weekend in London against Jacksonville and the bye week that follows could prove to be an interesting one. This is a Broncos team that hasn't made the playoffs since Peyton Manning, Von Miller and company led them to a Super Bowl title to cap the 2015 season.

There was a lot of optimism they would snap their five-year streak of losing records after general manager George Paton hired Hackett and then traded for Wilson in the offseason.

Instead, the struggles continue.

“The heat's always on,” Hackett said after the Broncos' fourth consecutive loss. “You want to always try to give yourself a chance to get to the playoffs. We’re behind the eight ball right now. We've got to find a way to fight ourselves out of this hole.”

The Broncos saw Wilson on the headset instead of the field due to a hamstring injury. Rypien said Wilson was a “great leader.” Rypien, though, couldn't ignite the offense, throwing for 225 yards and one interception. His last toss of the game was wide of the mark to KJ Hamler.

“Everybody in that locker room feels the urgency to get better,” Rypien said. “That starts with every single guy looking at themselves in the mirror and figuring out what can I do to help this offense. Because your defense playing as well as our defense is, you shouldn’t be losing games. That’s just point-blank, period, fact.”

The Broncos defense certainly did their part as they held Zach Wilson and the Jets to 10 first downs and forced eight punts.

“That is a good football team over there,” said Jets coach Robert Saleh, whose team improved to a surprising 5-2. “They’re inches away and they’ve got a hell of a defense over there.”

Even on offense, Denver dominated in most categories, including more total yards (324-260) and time of possession (almost a five-minute gap). But it didn't translate into points on a windy day when reliable kicker Brandon McManus missed a point-after-try and a 56-yard field goal. The Broncos also had a pair of offensive possessions that resulted in punts after lasting just 24 seconds and 43 seconds.

“I’m sick of being up here and saying the same thing over and over again,” Hackett said. “There are no excuses. We’ve been in every single game. We’ve got to win these games. As a team, as an offense, defense, everybody.

“It’s frustrating being up here having to say the same thing because, like I said, those opportunities are there. We have to make them. It’s that simple.”