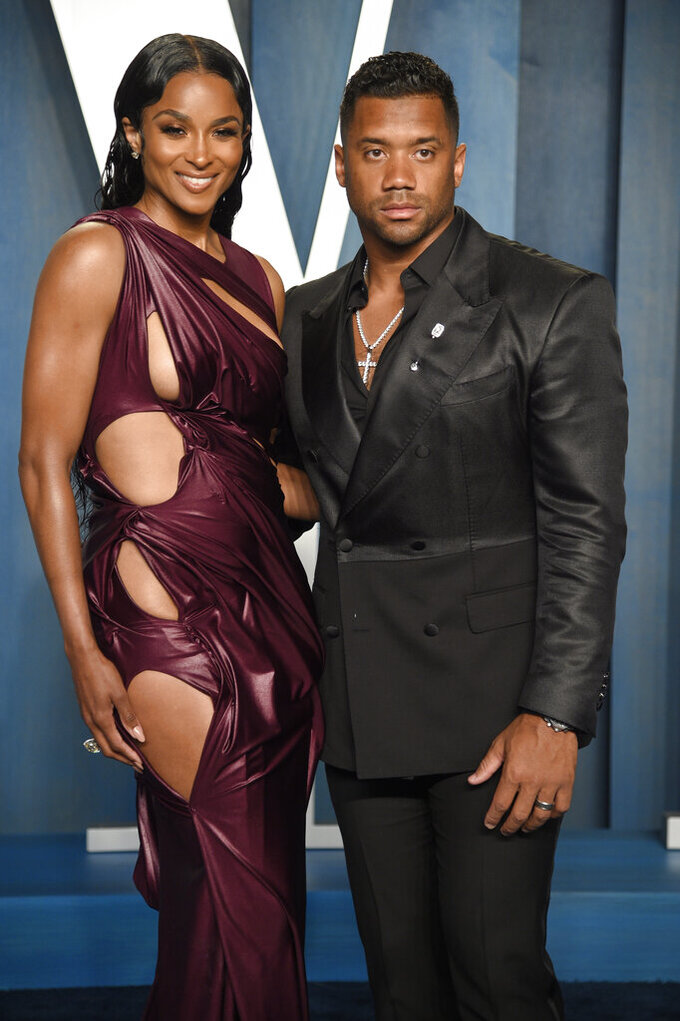 Ciara, left, and Russell Wilson arrive at the Vanity Fair Oscar Party on Sunday, March 27, 2022, at the Wallis Annenberg Center for the Performing Arts in Beverly Hills, Calif. (Photo by Evan Agostini/Invision/AP)

Not long after Hackett replaced Vic Fangio, Wilson arrived in the blockbuster trade with the Seahawks that set in motion an unprecedented flurry of deals across the NFL this spring.

Of the nine NFL teams with new head coaches, only the Broncos also have a new starting quarterback for 2022.

The Broncos, whose five-year funk of losing records has cost six starting quarterbacks and two head coaches their jobs, officially kicked off their offseason program this week, and players spoke excitedly about the new vibe at team headquarters.

“It's new, it's fresh,” safety Justin Simmons said of Hackett's charisma and zeal. “It's been a lot of fun. It's only been technically one day, but just being around him for the past few weeks, you can tell he's special. He has great energy about him.”

“The juice is just different,” receiver Courtland Sutton said. “I wasn't here when Peyton was here, but from what I'm hearing from everyone who was, the juice and the energy is pretty similar.”

Players praising the new head coach or quarterback is nothing new. It's almost a rite of spring. But there's no denying the energy pulsating through the team and the city.

Wilson and his wife, R&B star Ciara, have been making the rounds to Denver children's hospitals, Nuggets games and the Colorado Rockies opener, where Wilson fired a strike with his ceremonial first pitch Friday.

It's reminiscent of the way Manning captured the region's fascination a decade ago when he arrived from Indianapolis for the second chapter of his stellar career, which ended with a tickertape parade.

The Broncos have pinballed their way through 10 starting quarterbacks since Manning turned his attention to television — and possibly to being the face of a new ownership group with the team up for sale this year with a record expected asking price of at least $4.5 billion.

That group of QBs includes journeyman Teddy Bridgewater, who beat out incumbent Drew Lock last summer. Now Bridgewater is a backup in Miami and Lock was part of the trade that landed Wilson in Denver.

“Everyone from the equipment guys, video, everyone in the building is understanding that we have to operate at a different level and to a different standard," Sutton said. “I think it's Russ plus Coach Hackett, the new coaching staff. I think everyone is bringing that new juice and new energy into the building.”

With a Super Bowl winner under center, the benchmarks have risen for an offense that's long struggled to score points. But it's not just the offense that's benefitting from Russell's arrival, Simmons noted.

“There's no denying the different energy and vibe in the building, the confidence guys are walking around with," Simmons said. “Defensively, the No. 1 thing we've talked about is this is great, we're going to be competing, we're going to be in games.”

Wilson's arrival in Denver has created a Mount Rushmore of starting quarterbacks in the AFC West that already featured Justin Herbert, Patrick Mahomes and Derek Carr.

Also new to the division is Raiders head coach Josh McDaniels, who was fired in his second season in Denver more than a decade ago. He's sticking with Carr as his starter.

The league's seven other new head coaches are also sticking with their incumbent signal callers: