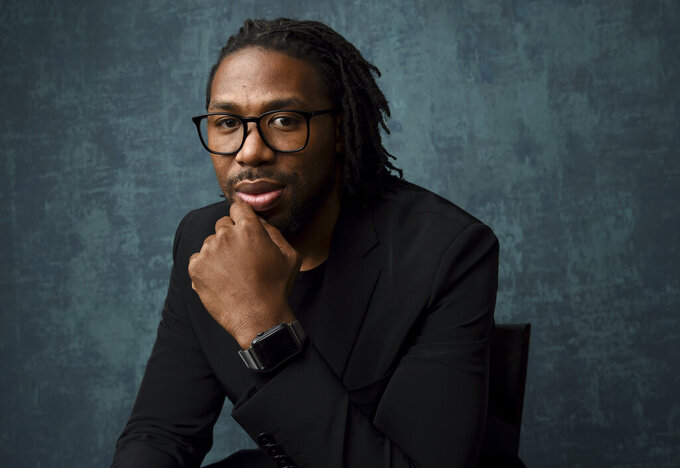 This Jan. 27, 2020 photo shows Matthew A. Cherry during a portrait session at the 92nd Academy Awards Nominees Luncheon in Los Angeles. Cherry is nominated for an Oscar for his animated short "Hair Love." (AP Photo/Chris Pizzello)

LOS ANGELES (AP) — When Matthew A. Cherry became an Oscar nominee, that was initially good enough for him, until he heard about the death of Kobe Bryant, a former professional athlete — just like himself — who was nominated in the same category in 2018.

For Cherry, Bryant’s death is fueling his desire to win in an Oscar trophy. The director, who is a former NFL player, could accomplish that feat through “Hair Love,” which is nominated for best animated short, a category the NBA legend won for his project “Dear Basketball.” The Los Angeles Lakers superstar died in a helicopter crash Sunday involving eight others including his 13-year-old daughter, Gianna.

“Hair Love" delves into a story about an African American father who learns how to style his daughter’s hair for the first time. He created the 6-minute film to highlight a black family in animation — which he says is a rarity — provide a positive representation for black kids and normalize black hair.

As a football player, Cherry had stints with several teams including the Jacksonville Jaguars, Cincinnati Bengals, Carolina Panthers and Baltimore Ravens.

In a recent interview, he spoke with The Associated Press about continuing Bryant’s legacy in film, the importance of short films and dealing with the stereotypes of an athlete transitioning into the industry.

AP: How did Bryant’s Oscar win in 2018 inspire you as a filmmaker?

CHERRY: Just knowing it’s possible. Sometimes I think people talk about diversity and inclusion. I think the best way for that to make a difference is just to see people that look like you kind of doing jobs you didn’t know existed. ... He really just set the bar.

AP: How has Bryant’s death impacted you?

CHERRY: I know they say awards don’t matter and everything, but I really would love to win, especially since it’s the same category. ... I would love to win so I could shout out his name to honor him and continue his legacy. It’s hard as an athlete trying to transition into a different career. So often, you get told to stick to sports. You tell people what you want to do and they’re like kind of whatever and brushing you off. I think to make it to this level and being in the same category as him, it’s just all really kind of crazy. I really just want to represent for him.

AP: Have you and Bryant ever worked together?

CHERRY: No, actually crazy enough, he shouted us out like two weeks ago when we got the Oscar nomination. Somebody from The Undefeated included us in a tweet. ... He was like ‘Let’s go!’ That was literally his tweet. I had looked forward to meeting him on the circuit. It’s just a tragedy.

AP: What was the genesis behind ‘Hair Love’?

CHERRY: I came across a lot of viral videos of African American fathers that were doing their daughter’s hair, and the numbers were just insane. I was wondering kind of why? Because every time I show and share a mother and a daughter or son, it wouldn’t do as well. People looked at it as a anomaly. There’s this perception about black men that they’re not involved in their kids lives, where studies have actually shown that they’re most involved. But if you look at mainstream media, you wouldn’t think that.

AP: Why is ‘Hair Love’ so important for people to see?

CHERRY: As you know, our hair is often times policed. We can’t wear it in certain work environments or certain schools. There’s that story about the young gentleman in Houston named DeAndre Arnold who’s not able to wear his hair that looks just like mine, because they changed a rule. ... We wanted to normalize us in the experience. It was important to us to showcase a black father that was young, that had tattoos. I think if you saw someone like him on the street, you would assume that wasn’t a loving father that does his daughter’s hair. We’re just trying to change the conversation, one project at a time.

CHERRY: It’s also kind of ironic because, why does a law have to be passed for us to wear our hair, how it grows out of our head naturally? But I’m glad that real change is happening. I hope that this project shines a light on that.