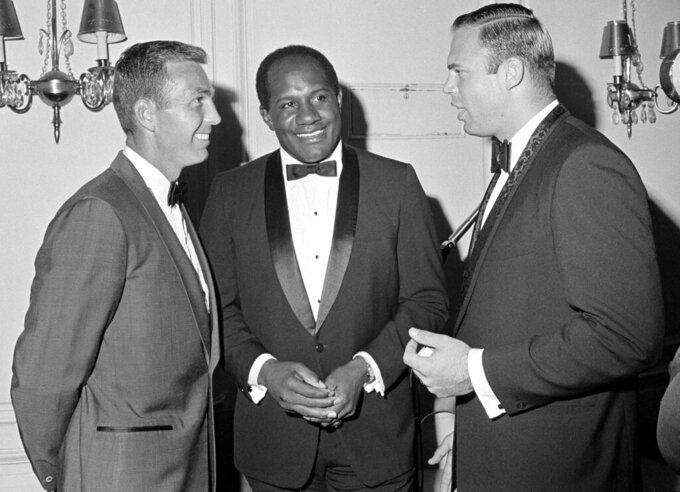 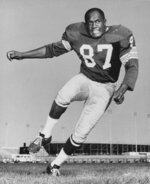 Willie Davis, a Pro Football Hall of Fame defensive lineman who helped the Green Bay Packers win each of the first two Super Bowls, has died. He was 85.

The Packers confirmed Davis' death to the Pro Football Hall of Fame on Wednesday, as did his former teammate and fellow hall member, Dave Robinson.

Davis died in a Santa Monica, California hospital. His wife, Carol, told the Packers her husband had been hospitalized for about a month with kidney failure and passed away peacefully.

“The Green Bay Packers family was saddened today to learn about the passing of Willie Davis,” said Packers President/CEO Mark Murphy. “One of the great defensive players of his era, Willie was a significant contributor to the Packers’ five NFL championship teams during the 1960s.

A 15th-round draft pick from Grambling, Davis began his NFL career by playing both offense and defense for the Cleveland Browns in 1958 and ’59. He had his greatest success after getting traded to the Packers.

He remained with the Packers until finishing his NFL career in 1969 as a five-time All-Pro. Although tackles and sacks weren’t measured at the time Davis played, his 22 career fumble recoveries showcased his dominance and big-play ability.

“There were few players in the league who were as tough as Willie,” Packers Hall of Fame quarterback Bart Starr said in the foreword to Davis’ book, “Closing The Gap: Lombardi, the Packers Dynasty and the Pursuit of Excellence. “He was at his best in games in which we struggled. When it was tough, he rose to the top and took our defensive people right along with him.”

Davis helped the Packers win the NFL championship in 1965 before capping the 1966 and 1967 seasons with titles in the first two Super Bowls.

But he didn’t initially embrace the move to Green Bay.

Davis noted in his book that he had just signed a contract with the Browns and believed he was being groomed as Cleveland’s future starting left tackle on offense when he learned about the trade on the radio. Green Bay acquired Davis in a July 1960 trade that sent wide receiver A.D. Williams to Cleveland.

“At the time, I felt slightly betrayed,” Davis wrote in his book. “I felt the organization didn’t care much about me, like I was being thrown away. I also panicked, wondering what this would mean for my future. I absolutely did not want to play in Green Bay. In fact, I was so turned off by the idea that my first thought was about retiring.”

He instead stuck it out and developed into one of the top defensive linemen of his era.

“Willie’s extraordinary athleticism was an undeniable factor in Green Bay’s winning tradition of the 1960s under coach Vince Lombardi," Hall of Fame President David Baker said. "He helped the Packers through an unprecedented championship run and to two Super Bowl victories. Willie was a man of true character on and off the field. The Hall of Fame will forever keep his legacy alive to serve as inspiration to future generations.”

In an NFL Films tribute to Davis, former Packers center Bill Curry called him “the finest combination of leader and player that I ever saw.” In that same tribute, former Packers offensive lineman and Hall of Fame member Forrest Gregg said that “I can’t ever remember a football game that he played in where I didn’t think Willie Davis played absolutely the best he could possibly play that day.’’

“He put as much fear in me, because of what he could do and his abilities, as any defensive end that I had to face,” Dawson told NFL Films.

Davis earned a master’s degree in business administration from the University of Chicago late in his NFL career, which helped him make a successful transition to the business world after he stopped playing.

“We all knew football wasn’t going to last forever,” Davis wrote in his book. “The longevity of the average football player was less than 10 years, and that meant there were many men who were jobless with little financial security by the time they were in their early 30s. That was a scary prospect. I wanted to make sure I didn’t fall into that category.”

Davis served on the boards of directors for several companies, including Dow Chemical Co., Sara Lee Corp., Schlitz Brewing and Mattel Toys. He was on the Packers’ board of directors from 1994-2005.

He also worked as an NBC television analyst for NFL games, purchased several radio stations and was inducted into the Wisconsin Broadcasters Association's hall of fame.

Davis' debut in the NFL was delayed by military service.

“I got drafted immediately after my first preseason camp and had to serve in the military for two years," he wrote in his book. “After bouncing around from base to base and playing football for the army, I left the military a stronger, more focused and mature man.”

"Along the way, there were key moments at each stage, key opportunities that, when I took full advantage of them, propelled me to the next level,” Davis also wrote. “I had some slip-ups along the way, but when it mattered, when it was important, I stepped up, practiced what I believed, took the advice of those I respected and went for it with everything I could give. That’s how I succeeded in football, business and beyond.”

Survivors include Davis' wife, his children Duane and Lori, plus grandchildren David, Wyatt, Harley and Hayden.