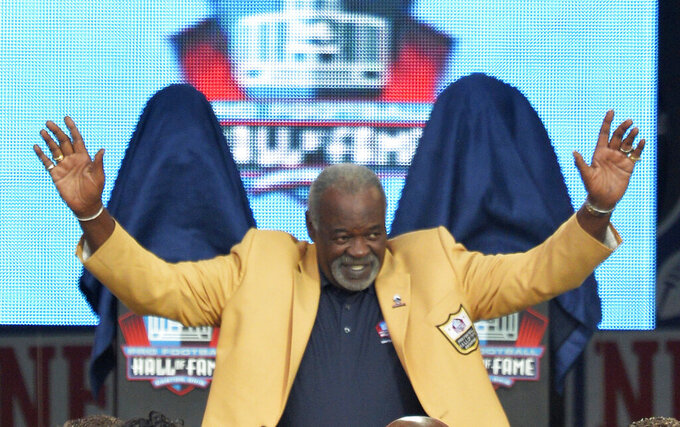 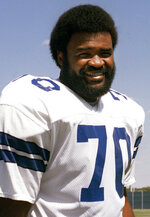 Rayfield Wright, the Pro Football Hall of Fame offensive tackle nicknamed “Big Cat” who went to five Super Bowls in his 13 NFL seasons with the Dallas Cowboys, died Thursday. He was 76.

Wright's family confirmed his death Thursday to the Pro Football Hall of Fame, which said Wright had been hospitalized for several days following a severe seizure. The Cowboys also confirmed the death.

A big player for his era at 6-foot-6 and over 250 pounds, Wright had already been a backup tight end for a couple of seasons when coach Tom Landry asked him about playing tackle. A surprised Wright said he had never played tackle in his life, but Landry told him he would make a good one.

Wright first started at tackle in a 1969 game lined up against Deacon Jones, the most dominant pass rusher of that era. Wright held his own and settled in as the full-time starter at right tackle in 1970, when Dallas made its first Super Bowl. The Cowboys then won their first Super Bowl title in 1971, the first of six consecutive seasons Wright was a Pro Bowler. He was a three-time All-Pro.

“He was absolutely the best,” Hall of Fame quarterback Roger Staubach said before Wright’s hall induction in 2006. “Rayfield was a big, strong guy that was able to transfer his size and strength from tight end to tackle. He also had such quick feet that he was able to deal with some of the faster defensive ends and even the linebacker blitzes. If he got beat, I don’t remember it.”

His “Big Cat” nickname was because of being so nimble for his size.

Dallas won another Super Bowl in 1977, but Wright played only two games that season because of knee surgery. He had played in 95 of the team’s 98 regular-season games, starting 94 of them, the previous seven seasons.

After Wright started only 16 of his 31 games in 1978 and 1979, he was released by the Cowboys the following spring. He signed with NFC East rival Philadelphia, but officially retired because of lingering injuries early in training camp without playing a game for the Eagles.

“Rayfield Wright was the epitome of what it takes to be a Hall of Famer,” said Cowboys owner Jerry Jones, who bought the team in 1989. “His grit, his agility, his passion, his charisma and his love for football, the community and his family always shined through. He remained an important part of the Cowboys family long after his playing days ended.”

Wright was diagnosed with early stage dementia in 2012, but had long been plagued by seizures since his retirement. He believed they were from the effects of continued blows to the head while playing football. He had long hidden dealing with headaches, dizziness and, at times, unexplained irritability and forgetfulness.

In a 2014 interview with The New York Times, Wright said he incurred so many concussions during his NFL career that he couldn’t even count them.

When finally inducted into the Hall of Fame more than a quarter-century after his last game, Wright was presented in Canton, Ohio, by longtime Fort Valley State football coach Stan Lomax.

Wright didn’t even make his high school football team for three years in Griffin, Georgia, before he went to Fort Valley State in his home state to play basketball. The following summer, Lomax made him quit his summer job at a mill to get ready to join the football team.

Lomax tried Wright at free safety, then used him as a punter, defensive end and tight end. The coach also became a father figure to Wright, who was picked by the Cowboys in the seventh round of the 1967 NFL draft.

Wright still preferred basketball, though he turned down an offer after his junior season to sign with the NBA’s Cincinnati Royals, the franchise that is now the Sacramento Kings, so that he could finish school.

His sights were still set on the NBA when Cowboys player personnel director Gil Brandt called and said the team was interested in drafting him.

“I realized that potential, playing for the Cowboys, was a God-given opportunity, and I couldn’t ignore it. I decided to attend the Cowboys’ training camp which was in July. The Royals camp didn’t start till August,” Wright said in his Hall of Fame speech. “I kind of figured that if I didn’t make the Cowboys team, I could go right to the NBA.”

Wright said Brandt was “signing everybody that could walk” and that he was among 137 rookies in the Cowboys’ training camp in 1967. He was one of five that made the team.

Wright was a backup tackle the first two months of the 1969 season, then thrust into the starting job when Ralph Neely got hurt. His first start came when Dallas, then 8-1, played at the 9-0 Los Angeles Rams with their Fearsome Foursome defense.

“We go up to the line of scrimmage and I’m looking at Deacon Jones square in his eyes, his eyes seem to be red as fire, he’s kicking his back leg like a bull,” Wright later recalled. “I’m saying to myself, `My God, what have I got myself into?‘”

Before the ball was snapped, Jones bellowed, “Boy, does your Mama know you out here?” Wright was so stunned that Jones ran over him.

“I rolled over, looked over at our sideline thinking that coach Landry was going to take me out of the game,” Wright said. “By that time, Deacon Jones reached his big arms down and said, `Hey, rookie, welcome to the NFL.’ … I said, `Well, Mr. Jones, you don’t know my Mama, so don’t talk about her. You want to play the game this way, we’ll play it.’”

The Rams won 24-23, but Wright got a game ball for the job he wound up doing against Jones. Their duels over the years went a long way toward building Wright’s reputation.

Dallas never had a losing record in Wright’s 13 seasons, a span that included eight NFC championship games and those five Super Bowl appearances. He was part of the NFL’s all-decade team for the 1970s.