Hall of Fame inductions roster is something to marvel at 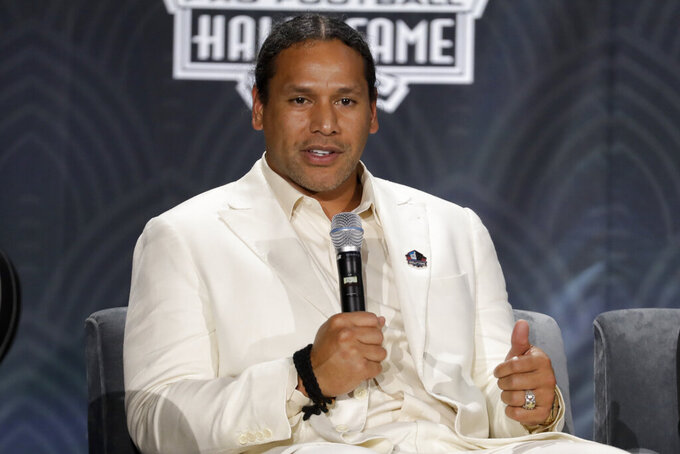 FILE - In this Feb. 1, 2020 file photo, Hall of Fame class of 2020 Troy Polamalu speaks at the NFL Honors football award show in Miami. The roster of men entering the Pro Football Hall of Fame this weekend of Saturday, Aug. 7, 2021, features everything from the prolific passer, to the dominant defender, and not to mention coaches. (AP Photo/Mark Humphrey, File)

Take a look at this roster:

All of them coached by Bill Cowher or Tom Flores or Jimmy Johnson.

The group of men entering the Pro Football Hall of Fame this weekend features everything. From a super scout who found the talent — the late Bill Nunn — to a defensive tackle who once punched out a horse: the late Alex Karras in his role as Mongo in “Blazing Saddles.”

“I never knew I was going to wind up a pro football player,” Manning told the Hall of Fame for its yearbook. “Like lots of kids, I had dreams and wanted to be like my dad, and my dad played football.”

Archie Manning is in the College Football Hall of Fame and also had a lengthy NFL career.

“That was kind of an easy answer when people asked me or if I had to write on a class project,” Peyton Manning said.

Nowadays, students write such projects about Manning, the five-time NFL MVP and two-time Super Bowl winner. And about Calvin Johnson, the prolific wideout for the Lions who played only nine seasons but was so impressive he is joining Jim Brown and Gale Sayers as Pro Football Hall of Famers inducted at 35 years old or younger.

This is a “Wow Weekend" in Canton. Due to the COVID-19 pandemic, the 2020 enshrinements of that year's class and a special centennial class were postponed to now. Combined with the 2021 group, 28 men are going into the hall.

There are so many inductees on Saturday and Sunday nights that the hall has limited speeches to eight minutes or less. Manning, well known for his verbosity, promises he will be under that maximum.

“So, they’re saying there’s like a blinking light at six minutes,” Manning said, “maybe a little bell going off at seven minutes, and then at eight minutes, they say that someone’s going to come up and lead the applause to end the speech. I look forward to seeing them come up and lead the applause while Alan Faneca is still speaking. Good luck getting him off the stage. Or anybody that’s an offensive linemen is probably tough to pull.”

Manning, Woodson and Calvin Johnson all were selected this year in their first time eligible. So was Polamalu in 2020; he has tested positive for the coronavirus and his status for attending Saturday is uncertain.

Lynch, on the other hand, was a finalist seven times before his breakthrough this year. It wasn't that he lacked credentials as one of the top safeties in the game for 15 seasons. The competition at the position was hefty, and Lynch, currently the general manager of the 49ers, recognizes that.

“I think that is one thing that’s extremely well-gratifying to see that there’s been a movement, and I think a well-needed one,” Lynch said. "That speaks to the value of that position because for years safeties were facing an uphill battle of getting into the hall — and I feel like I’ve lived it, but don’t know verbatim kind of how we’ve started knocking down the door. But a number of safeties have done it: Brian Dawkins, Troy Polamalu, Steve Atwater. Kenny Houston at some point went in.

“The list is long here in recent years and I think that’s appropriate because I think that position really has an impact on football and the reason being is because you’re asked to do a little bit of everything.”

The guys going into the Hall of Fame this week represent that kind of versatility.