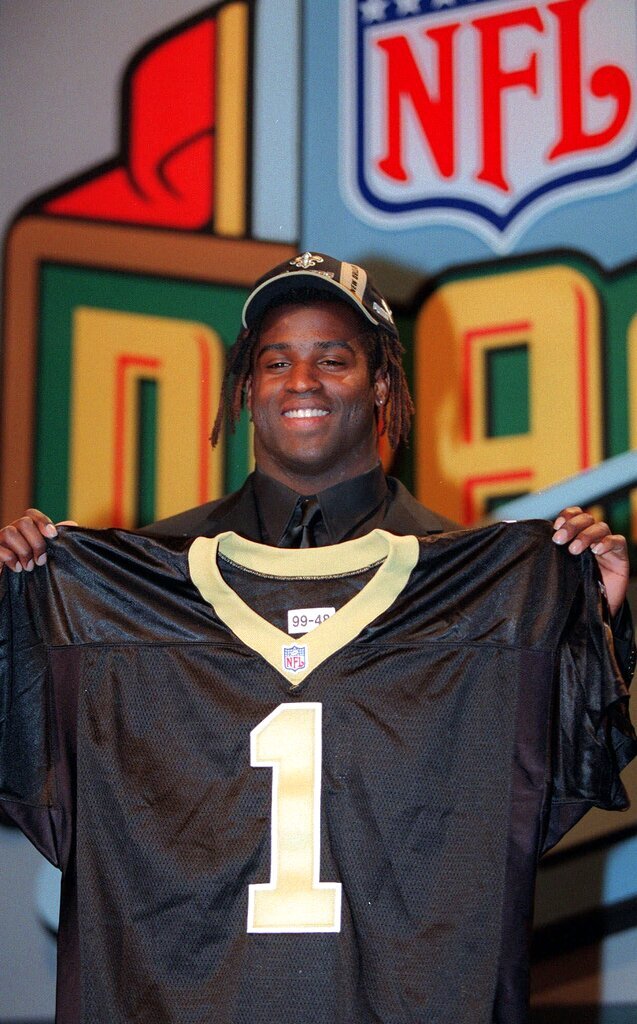 FILE - In this April 17, 1999, file photo, Texas running back Ricky Williams poses with a New Orleans Saints jersey after the Saints made Williams their first pick in the NFL draft and the fifth overall pick, in New York. (AP Photo/Suzanne Plunkett, File)

NEW ORLEANS (AP) — BEST FIRST-ROUND DRAFT PICK: LT Willie Roaf. Drafted eighth overall out of Louisiana Tech in 1993, he became just the second Saints player enshrined in the Pro Football Hall of Fame after linebacker Rickey Jackson. Roaf played nine seasons with the Saints, followed by four more with Kansas City. He was an All-Pro four times and selected for 11 Pro Bowls. He also was part of the 2001 Saints team that captured the first playoff victory in franchise history.

BEST SECOND-ROUND DRAFT PICK: LB Rickey Jackson. The star of the “Dome Patrol” linebacker group was selected 51st overall in 1981. Jackson started for 13 seasons with the Saints and two more for San Francisco. He is the Saints’ leader in sacks with 115 and tackles with 1,104. Receiver Michael Thomas also was a second-round pick and is a two-time All-Pro who last season, his fourth as a pro, set a single-season NFL record with 149 catches.

BEST LATE-ROUND DRAFT PICK: WR Marques Colston. Selected out of Hofstra in the seventh and final round of the 2006 draft, Colston became the Saints' all-time receiving leader with 711 catches for 9,759 yards in 10 seasons. He had six 1,000-yard seasons and two more that eclipsed 900 yards. Colston's body of work places him above another Saints receiver from an era when the draft included 17 rounds. WR Danny Abramowitz was a final-round selection in 1967. He was an All-Pro in 1969, when he caught 73 passes for 1,015 yards.

WORST FIRST-ROUND DRAFT PICK: P-K Russell Erxleben. Drafted 11th overall out of Texas, Erxleben punted and sometimes kicked field goals for the Saints for five seasons. After behind drafted ahead of the likes of Joe Montana, Marc Gastineau and Kellen Winslow, he made four of eight field goals in his career and his career yards-per-punt average was 40.6. For Saints fans, the lasting image of Erxleben is him lying face down on the Superdome turf, pounding his fists as he was showered with boos after missing a late field goal in a 26-23 loss to San Francisco in 1980.

WORST SECOND-ROUND DRAFT PICK: CB Stanley Jean-Baptiste. The Saints selected Jean-Baptiste 58th overall in 2014. The Saints hoped the 6-foot-3 defensive back, who'd been converted from a wide receiver at Nebraska, would give New Orleans an answer to some of the taller receivers thriving in the NFC South. Jean-Baptiste wound up playing four games as a rookie and was cut before the 2015 season.

BEST DRAFT TRADE: In 1993, then-general manager Jim Finks traded linebacker Pat Swilling to Detroit for the Lions’ first- and fourth-round choices. The Saints then used that first-round pick, eighth overall, to select Roaf. It was one of the last moves made by Finks, who resigned in July of that year after revealing he'd been diagnosed with lung cancer.

WORST DRAFT TRADE: Those with shorter memories will point to an infamous 1999 deal in which the Saints, then coached by Mike Ditka, sent all of their picks that year, as well as 2000 first- and third-round picks, to Washington for the rights to pick running back Ricky Williams fifth overall. But one could argue the very worst goes back to the first draft in club history. New Orleans had the top overall pick in 1967 and traded it, a third-round pick and C Bill Curry to the Baltimore Colts for QB Gary Cuozzo and OL Butch Allison. Baltimore used that top overall pick on DE Bubba Smith, who became an All-Pro. There were also four eventual Hall of Famers taken in that first round: QB Bob Griese, RB Floyd Little, DT Alan Page and G Gene Upshaw. Cuozzo and Allison each lasted one uneventful season with the Saints. At least Williams played three seasons for New Orleans, hitting the 1,000-yard rushing mark twice and gaining 1,756 scrimmage yards in 2001 as the starter for the first Saints team to win a playoff game. Williams was even an All-Pro after his trade to Miami in 2002, when the Saints decided to feature RB Deuce McAllister.

DID YOU KNOW THEY ONCE DRAFTED?: Pro wrestling star “Mr. Wonderful” Paul Orndorff. New Orleans took Orndoff, a tight end, in the 12th round, 289th overall, of the 1973 draft out of Tampa. He never played in the NFL because of failed physicals with both New Orleans and later Kansas City, but did play one season in the World Football League with Jacksonville in 1975.