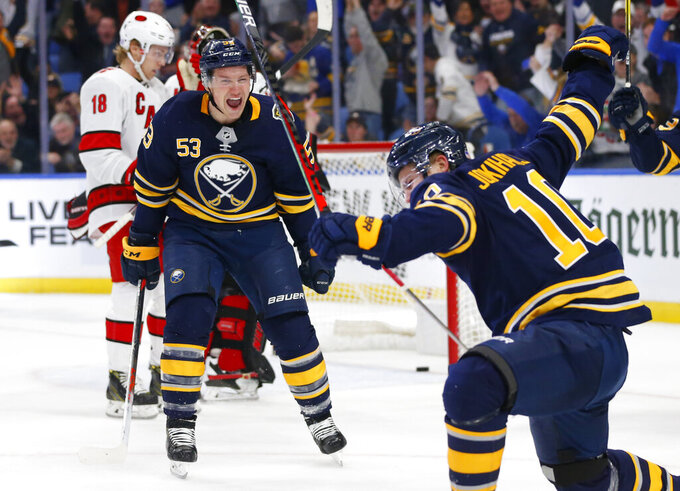 Hamilton capped a frenetic, back-and-forth game that featured three goals in the final 6:25 of regulation. After Buffalo’s Johan Larsson tied it with 41 seconds left in the third period, Hamilton scored 2:32 into the extra session on a slap shot from the right circle after Ryan Dzingel drove to the net and left the puck for Hamilton.

Andrei Svechnikov and Teuvo Teravainen each had a goal and two assists for the Hurricanes, who have won two straight following a four-game losing streak. Jordan Staal and Sebastian Aho also scored for Carolina. Petr Mrazek made 29 saves.

Jeff Skinner had a goal and an assist for Buffalo, which has lost six in a row following a 9-2-1 start. Henri Jokiharju and Curtis Lazar also scored, and Carter Hutton made 24 saves.

Jokiharju tied it at 3 with 6:25 remaining following a bad turnover by Hurricanes defenseman Brett Pesce. Jokiharju scored his second goal of the season on a low shot through Mrazek’s legs.

Svechnikov restored Carolina’s lead with 3:54 remaining on the power play with a hard, high wrist shot.

Larsson then tipped Skinner’s shot from the right circle.

The Sabres were clearly not pleased with the game’s officiating. Sam Reinhart received a 10-minute misconduct late in the third after receiving a high-sticking penalty that led to Carolina’s late lead. Rasmus Ristolainen got a 10-minute misconduct at the end of the game after he and Svechnikov received matching penalties; on the play in question, Svechnikov appeared to tackle Ristolainen down to the ice.

Skinner opened the scoring 4:36 into the game following a strong forecheck in the Carolina zone. Staal evened it with 7:53 remaining in the first on his 100th goal for the Hurricanes.

Teravainen made it 2-1 on the power play with 2:43 left in the first, finishing a great assist from Svechnikov.

The Hurricanes came storming out of the gates to open the second period, quickly grabbing a 3-1 lead on Aho’s ninth.

Lazar got the Sabres back in it with 4:56 left in the second in his first game with Buffalo. The young center showcased his speed, bursting forward for a breakaway and scoring on a shot high to the blocker side.

NOTES: Sabres D Zach Bogosian joined the team in practice Wednesday for the first time since having hip surgery in the spring. Bogosian, 29, has been a veteran presence on the back line for Buffalo since arriving in a trade in 2015. ... Lazar was recalled from the AHL’s Rochester Americans with LW Marcus Johansson injured. Johansson is expected to miss at least the next three games with an upper-body injury. ... D Trevor Van Riemsdyk was scratched for Carolina. ... Johansson, D John Gilmour and D Colin Miller were scratched for Buffalo. Miller was a healthy scratch for the first time this season. ... This was the 100th career game for Sabres D Rasmus Dahlin.

Hurricanes: Plat at Minnesota on Saturday.