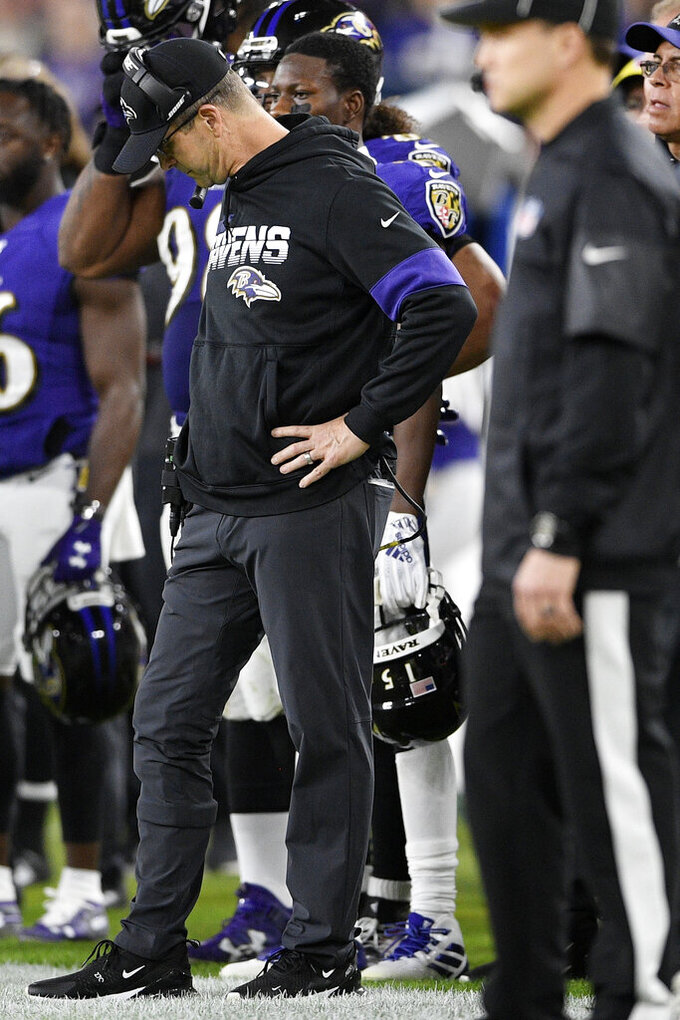 Baltimore Ravens head coach John Harbaugh reacts after a Ravens fumble recovered by the Tennessee Titanson during the second half of an NFL divisional playoff football game against the Tennessee Titans, Saturday, Jan. 11, 2020, in Baltimore. (AP Photo/Nick Wass)

OWINGS MILLS, Md. (AP) — John Harbaugh believes the Ravens have all the ingredients in place to make a Super Bowl run next season.

That hasn't made it any easier for Baltimore's coach to cope with the abrupt fashion in which this season ended.

The Ravens brought a 14-2 record and a 12-game winning streak into last Saturday's game against the Tennessee Titans, who pulled off a 28-12 upset to advance to the AFC championship game.

“It's been a tough week. It's been a rough, emotional week for all of us," Harbaugh said Friday during a postseason news conference that occurred weeks before he would have liked. “It hurts. It's disappointing. It was a gut shot."

Harbaugh and first-year general manager Eric DeCosta built a team that finished with the best regular-season record in the NFL and finest in franchise history. Using multi-faceted quarterback Lamar Jackson, a strong running game and a stingy, blitz-happy defense, the Ravens played better than any team in the league — until January.

“We were the best team in the regular season that we could be, but we weren’t at our best in the playoff game," Harbaugh said.

Jackson pierced the Titans for more than 500 yards, but he committed three turnovers and twice was stopped on fourth-and-1 plays. That, Harbaugh conceded, was the difference.

“The critical downs, they made the plays and we didn’t. We made the mistakes, they didn’t,” Harbaugh said. “Those two things combined for the outcome that we had.”

If there's any consolation, Harbaugh expects the Ravens to be a contender in 2020, his 13th season as Baltimore's head coach. After all, the Ravens went unbeaten for three straight months with a second-year quarterback running an offense in its infant stage and with a defense that was lacking two injured safeties (Tony Jefferson, DeShon Elliott) and cornerback Tavon Young (neck).

“We did a remarkable job in building this team the way it is right now," Harbaugh said. “So let's take that and move forward. We have good draft resources, we have great cap resources that we haven't had in the past. So, we've got a chance to build our roster in a way we haven't been able to maybe the last large number of years."

That means the Ravens can decide whether to retain unrestricted free agent linebacker Matthew Judon, who led the team in sacks, or spend that money on someone else.

There are plenty of needs, even for a team that lost three games over the course of the entire season. The Ravens are considering getting a wide receiver to go with Marquise Brown, who started training camp with a foot injury and ended his rookie year with a standout performance against Tennessee.

“He’s a huge piece of what we’re doing and fits this offense so well," Harbaugh said.

Expect the Ravens to add another speedy target for Jackson, who threw mostly to his tight ends this season.

“The draft, I know it’s a great year for wide receivers, I’ve been told. Maybe it’s a free agent. Maybe it’s trade. Who knows what it could be?" Harbaugh said.

Harbaugh expects to be working with the same coaching staff. Offensive coordinator Greg Roman and defensive coordinator Don Martindale interviewed for head coaching jobs but were not chosen, and quarterbacks coach James Urban and tight ends coach Bobby Engram spurned the Eagles for jobs as assistants.

When the Ravens get back together for minicamp, the process of trying to win the Super Bowl will begin again, this time as two-time AFC North champs.

“We're going to start from the beginning," Harbaugh said. “We'll be talking about building the foundation and starting to stack one good day after another. We'll see where it takes us. Are we capable of winning the whole thing next year? Absolutely. Without question. Now, we've got to go do it.”