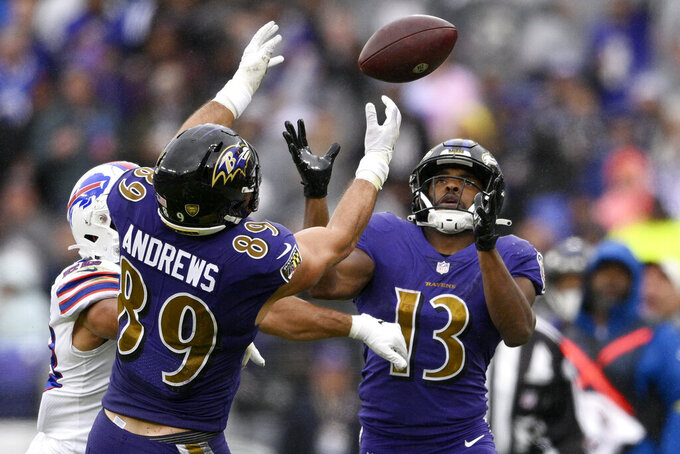 Baltimore Ravens wide receiver Devin Duvernay (13) makes a catch as a pass is deflected into the air in the first half of an NFL football game between the Ravens and the Buffalo Bills Sunday, Oct. 2, 2022, in Baltimore. Also reaching for the ball is Ravens tight end Mark Andrews (89). (AP Photo/Nick Wass)

BALTIMORE (AP) — Running and passing with a sense of urgency, Lamar Jackson deftly moved the Baltimore Ravens from one end of the field to the other in the fourth quarter of a tie game against the Buffalo Bills.

And then, with Baltimore facing a fourth-and-goal at the Buffalo 2 with just over four minutes left, it came time to make a decision. Go for the touchdown, or let the most accurate field goal kicker in NFL history do his thing?

Coach John Harbaugh left his offense on the field. It was a gutsy call, and one he would ultimately regret.

Jackson was pressured in the pocket soon after taking the snap and ended up throwing an interception in the end zone — one that crucially resulted in a touchback. The Bills promptly went the other way and completed their rally from a 17-point deficit by kicking a field goal as time expired for a 23-20 victory Sunday.

Two weeks earlier, Harbaugh called upon Justin Tucker to kick a field goal late in a home game against Miami. Tucker delivered, but the Dolphins subsequently drove for the winning touchdown in a 42-38 comeback victory.

This time, Harbaugh went for it all. And got nothing.

“I thought like it gave us the best chance to win the game," he said. “It didn’t turn out that way and unfortunately, and we lost the game. Hindsight, you take the points. But you look at it analytically, you’ll understand why we did it.”

And when you look at how the Ravens have played this year — frittering away a 21-point lead against the Dolphins and a 20-3 advantage against the Bills — and you'll understand why they're 2-2.

Playing well for 58 minutes isn't good enough. Neither is a drive that lasts more than nine minutes that ends without a score.

Jackson felt the same way. He approved the decision to go for the touchdown, regretting only that he couldn't make it work.

The ill-fated play started off well, as receiver Devin Duvernay initially got open in the end zone. But an onslaught of rushing linemen pretty much ruined any chance Jackson had of getting him the ball.

“They had their hands up and I’m trying to see what’s going on,” Jackson said. “I saw Duv in the corner late. If I saw him earlier, that would have been a touchdown.”

Instead, Jackson ended up heaving the ball an instant before he was smothered, and Buffalo's Jordan Poyer snagged it for a touchback.

”(Duvernay) was wide open. Lamar didn’t see him at first," Poyer said. "I peeked back at Lamar, he was scrambling. As soon as I peeked at him (Duvarnay), he was raising his hands up like he wanted the ball, so I just took off. And Lamar saw him open and he kind of floated it in the air.”

The interception enabled the Bills to start their final drive at the 20 instead of their own 2, yet another down side to Harbaugh's bold decision to go for it.

So what's it going to take for the Ravens to be the ones to make a big play in the fourth quarter instead of the opposition?

“It’s just executing. All 11 guys have to need to be a little bit better, a little bit sharper,” Andrews said. “I have a lot of confidence in this offense, this team, the guys that we have, to be able to make that play right there.

“I love that coach trusts us to do that and put the game away. Hopefully when we get another opportunity like that, we’ll be ready to go.”