Haskins up and down, Finley strong as Bengals beat Redskins 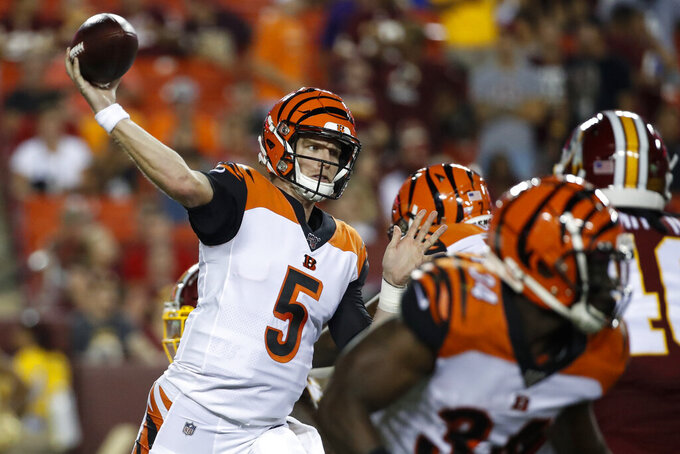 LANDOVER, Md. (AP) — Dwayne Haskins told himself before his second NFL preseason game that he wouldn't throw two interceptions like a week earlier.

Haskins accomplished that, threw a touchdown pass and lost a fumble in the Washington Redskins' 23-13 loss to the Cincinnati Bengals on Thursday night. The first-round pick made strong throws and his share of mistakes, while fellow rookie Ryan Finley continued to make his case to be Cincinnati's backup quarterback with yet another impressive outing.

"It's just fun to get out there," Finley said. "I feel like it's been so long. Just to get out there and play in a game is fun. You try to make practices as game-like as possible, but just getting out there for me, it's just refreshing."

Haskins threw a 55-yard TD pass to camp standout Robert Davis and was 7 of 14 for 114 yards with a sack fumble. The 15th overall pick showed poise under pressure and made progress from his Redskins debut.

"I was just trying to move the ball down the field, make some decisions, don't put the ball in harm's way," Haskins said. "When I play, I just play. I don't really want to think about making the same mistake twice or missing a throw. Just let it go and move on to the next one."

Haskins was far from perfect but looked more effective than veteran Case Keenum, who played the first three drives and was 3 of 7 for 52 yards. Keenum, who Washington acquired from Denver, said he was left wanting more, but feels the first-team offense is improving with an eye on Week 1 at Philadelphia.

Keenum, Haskins and longtime backup Colt McCoy are competing to be the Redskins' Week 1 starter. McCoy has yet to play in the preseason while he deals with lingering pain from a broken leg last year.

After already passing Jeff Driskell on Cincinnati's depth chart, Finley again showed why he's now the favorite to back up Andy Dalton. The fourth-round pick out of N.C. State completed his first nine passes and was 20 of 26 for 150 yards with two TD passes.

"He was very cool and calm, and we've got a lot of confidence with him in there," first-year Bengals coach Zac Taylor said.

Dalton was 5 of 9 for 36 yards and an interception in three series before giving way to Finley. Redskins defensive lineman Daron Payne tipped Dalton's third-down pass in the red zone, and safety Montae Nicholson picked it off and returned it 96 yards for a touchdown.

"If the ball didn't get tipped, it was going to be a touchdown," Dalton said. "Unfortunately it just went the other way with it. That's one of those things — balls don't find the ground very much when they get tipped. It was exactly how you draw it up. We had a great play call, and unfortunately it got tipped."

The first six plays of the game featured seven flags, and the penalty parade continued all night. The Bengals and Redskins combined for 22 penalties that added up to 195 yards.

"Still the penalties, man," Redskins coach Jay Gruden said. "It's the same old theme. It's something we've got to get cleaned up."

Bengals receiver Alex Erickson returned a punt 75 yards for a touchdown midway through the fourth quarter. It's the second consecutive week the Redskins allowed a punt return TD as they get accustomed to new special teams coach Nate Kaczor.

Bengals: WR John Ross remained out with a hamstring injury. ... WR A.J. Green is expected to miss the start of the season following ankle surgery.

Redskins: Tim Settle left the game with a knee injury, though Gruden expects the defensive lineman to be OK. ... RT Morgan Moses left with a hamstring injury. ... Rookie LB Cole Holcomb (shoulder) and WR Terry McLaurin (tailbone) did not play. ... RB Shaun Wilson injured his left ankle on Erickson's punt return and had to be carted off.

Redskins: Hope to get McCoy some action when they visit the Atlanta Falcons on Aug. 22.