Haskins, McLaurin and Sims give Redskins some future hope 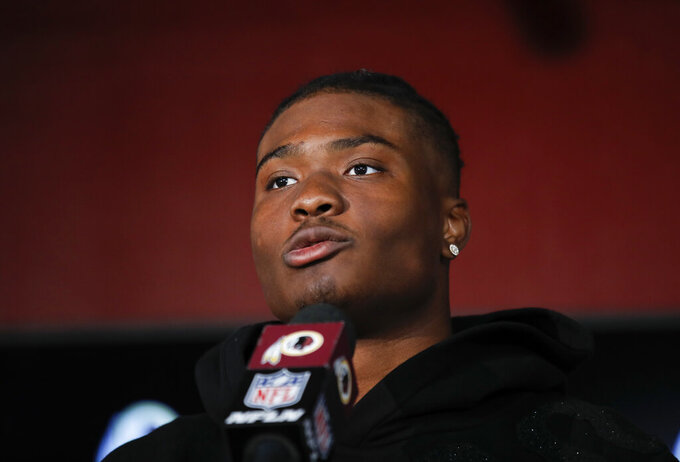 WASHINGTON (AP) — The first several weeks of the Dwayne Haskins era weren't all that promising.

The Washington Redskins fell to last in the NFL on offense, relied heavily on the running game featuring Adrian Peterson and tried to make things as simple as possible for the rookie quarterback.

Haskins on Sunday in a loss to Philadelphia completed 19 of 28 passes for 261 yards and two touchdowns: one to former Ohio State teammate Terry McLaurin and another to undrafted free agent Steven Sims. Those three, along with injured running back Derrius Guice, are the biggest reasons for hope on the offensive side of the ball in the Redskins' short- and long-term future.

With a potential No. 6 pick Daniel Jones vs. No. 15 pick Haskins showdown coming when the New York Giants visit next Sunday, it's another chance for Washington's young playmakers to show some promise.

“We did a good job calling great plays, giving us a spot where we could make something happen and we continue to work on and improve for next week,” Haskins said.

Building blocks aren't just there on offense. Ryan Anderson got a bigger role with Ryan Kerrigan on injured reserve, and the third-year linebacker had two sacks and three forced fumbles.

Anderson is still tough on himself.

“I had more opportunities,” he said. “I know what I got to do. I’m smart enough, I understand concepts, but sometimes I just second-guess myself and don’t go with what I know and what I see.”

After Miles Sanders rushed for 122 yards and a touchdown on 19 carries, the run defense is a legitimate concern. It shouldn't be after Washington used 2017 and 2018 first-round picks on Alabama defensive linemen Jonathan Allen and Daron Payne.

But the Redskins have struggled with the defensive scheme, execution and adjustments all season.

“We compete, we fight, we stay together and we try to figure it out as much as possible," safety Landon Collins said. “Just got to get back in the film room and make sure we get on top of everything.”

McLaurin has found his footing again after several weeks of opposing defenses keying on him. The third-round pick is second among rookie receivers with 51 catches, 833 yards and seven touchdowns.

“He’s a vocal playmaker in our receiving core,” Haskins said. “He really does a great job with bringing great leadership to the receiving room. Even though the receivers are known to be divas, he’s not. He’s someone that we rely on.”

Cornerback Josh Norman almost certainly won't be back next year, and the coaching staff isn't hiding that he's not of much use this season. Norman only played a handful of snaps because of injuries.

“We did the best for our team, you know?” interim coach Bill Callahan said. “It was the best decision we could make at the time."

Even with cornerback Jimmy Moreland's foot injury and Fabian Moreau's hamstring injury, don't expect Norman to get playing time against the Giants. The Redskins could put Moreland and/or Moreau on IR and sign a couple of young defensive backs.

The Eagles converted 69% of third downs against the Redskins, who are second worst in the league in that category.

The big question is whether Jones or Eli Manning will start for the Giants, but Callahan and offensive coordinator Kevin O'Connell's biggest task is continuing to make progress with Haskins, McLaurin and Sims.