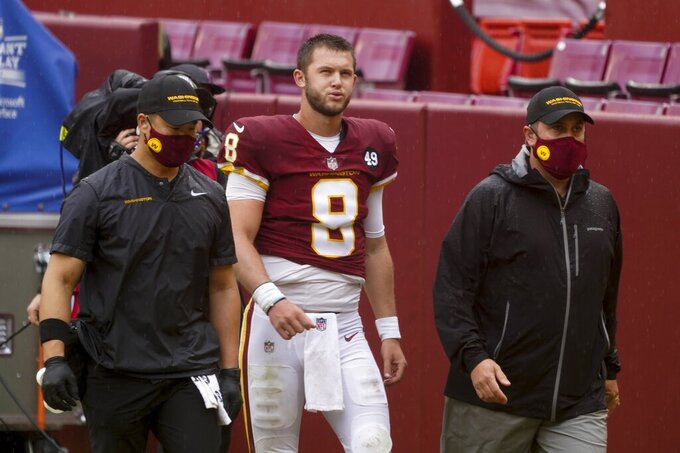 Washington Football Team's Kyle Allen is taken to the locker room after being injured during the first half of an NFL football game against the Los Angeles Rams Sunday, Oct. 11, 2020, in Landover, Md. (AP Photo/Steve Helber)

ASHBURN, Va. (AP) — Former starting quarterback Dwayne Haskins remains away from the Washington Football Team because of an illness that’s not considered COVID-19 related, and Kyle Allen is expected to start Sunday against the New York Giants.

Haskins was not at the stadium for Washington's most recent loss against the Los Angeles Rams and was sent home from the team’s practice facility Wednesday after being tested for the coronavirus. Coach Ron Rivera said a gastrointestinal ailment of sorts was bothering the second-year QB.

“We’re not keeping him out of the building, OK?” Rivera said. “What we’ve done is he’s come in, he’s seen the doctors, he’s taken his test and he’s gone home.”

Haskins was benched and demoted to third on the depth chart last week, so the plan was for the 2019 first-round pick to be inactive against L.A. The team sent him home Sunday morning after he reported having a stomach virus.

Rivera, who believes Allen and Alex Smith give Washington a better chance to win because of their experience, said he was hopeful Haskins would practice Thursday.

“This is an opportunity for him to continue to learn and grow and develop,” Rivera said. “I have not quit on the kid in terms of his development.”

Allen took first-team snaps at practice and is expected to start for Washington (1-4) at the Giants (0-5) this weekend with Smith backing up.

Allen left the Rams loss with a left arm injury in the second quarter, was replaced by Smith in his first game action since November 2018, and Rivera chose to stay that course even after his starter was cleared to return.

Rivera said Allen would get the nod over Smith against the Giants as long as he's healthy. Allen did not look inhibited in the throws he made early in practice.

"He actually had a good day of practice, took all the reps he was supposed to take and looked pretty good doing it," Rivera said.

Haskins' future with Washington is uncertain. Owner Dan Snyder, since-fired president Bruce Allen and since-fired coach Jay Gruden were in charge when the team drafted him, and Rivera gave Haskins the opportunity to start after seeing signs of growth in training camp.

Since a comeback victory against Philadelphia in Week 1, he hasn't seen much of what he wanted. Haskins overall this season is 89 of 146 for 939 yards passing, four touchdowns and three interceptions.

Rivera said he'd like to see continued progression from the 23-year-old, even giving him third-team snaps at practice. That is stunted by his absence, with rookie practice squad QB Steven Montez taking Haskins' place in drills behind Allen and Smith.

One possibility is Washington following Arizona's path with Josh Rosen: opting to trade him after a regime change. The trade deadline is Oct. 29.

“We’re not going into transactions and stuff like that that we could potentially do," Rivera said when asked about receiving calls to trade Haskins. "I don’t want to talk about the hypotheticals. Whatever happens happens as far as this football team goes. It’s really about trying to get us in position to win a game and develop this football team. We’ll cross the bridges as we get to them.”