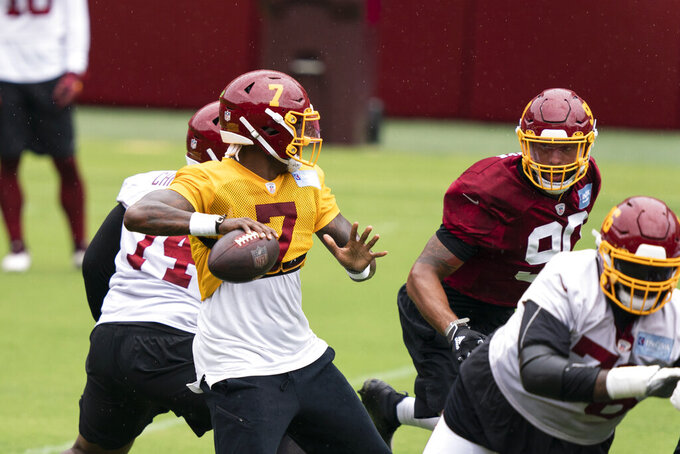 Ron Rivera told his players Dwayne Haskins will be Washington's starting quarterback for Week 1 against the Philadelphia Eagles, then he reflected on a similar declaration he made almost a decade ago.

Rivera was entering his first season as an NFL head coach with the Carolina Panthers, who months after hiring him drafted Cam Newton first overall. After enjoying several years of success with Newton, including a trip to the Super Bowl, Rivera hopes he's embarking on a similar path with Haskins as his starter.

“I made a commitment 10 years ago to another young quarterback and just told him, ‘Hey, you know what, I’m choosing you because I believe in you,'" Rivera said Wednesday after practice.

“That’s really how I feel about Dwayne. He’s lived up to his part of our conversation in January. Because of that, I’m living up to mine. He deserves the opportunity. He’s going to get my support. Hopefully we can ride it as long as I rode it with Cam."

It’s not a surprising development but a confirmation that the 2019 first-round pick did enough to earn the job under Rivera’s new regime. Haskins got the nod over Kyle Allen, whom Rivera knew well from his time with Carolina, and veteran Alex Smith, who's less than two years removed from breaking his right leg.

Rivera noticed Haskins getting ahead of the learning curve in training camp after no in-person offseason workouts disrupted the 23-year-old's opportunity to learn new offensive coordinator Scott Turner's system. Haskins said Monday he wanted to show the work he put in and he's "just trying to do my best and master the offense as much as I can on a daily basis." It's working.

“(Haskins has) made a lot of good plays. He’s gotten better every day at practice. I told him today: ‘Now the real work starts. Now you’ve got to gear up. We’ve got to bring it every week and you’ve got to play better so you’re playing your best football at the end of the season.’”

Rivera joked he declared Haskins the starter now so he wouldn’t have to keep answering the question, but it’s also a statement by Washington's first-year coach to his team with time running out before the Sept. 13 regular-season opener against Philadelphia.

Going to Newton in 2011 was a gimme given that Rivera was privy to the decision to draft him. It wasn't so much with Haskins, whom the previous front office led by since-fired president Bruce Allen selected with the 15th pick last year.

Rivera had been noncommittal about the quarterback position since taking over control of football operations. Acquiring Allen from Carolina seemed like a signal he wasn’t comfortable with Haskins, but by the start of camp there was a clear delineation: Haskins took snaps with the first-team offense and it was his job to lose.

It helps that Rivera sees plenty of Newton in Haskins, saying they throw the ball in a similar way to make it easy to catch for receivers and share leadership capabilities.

“First of all, it’s the desire to win,” Rivera said. "That to me is one of the overriding things that they both share. In similarities, their work ethic: They both have worked hard in their offseason getting themselves ready, and the way they prepare. That to me is a delight, that you have a guy that’s willing to commit to the preparation of it and it’s not just about showing up."

Haskins became the starter in Week 9 last year, going 2-5 in his first seven pro starts on the way to Washington finishing 3-13. Counting a couple of relief appearances, the Ohio State product completed 119 of 203 passes for 1,365 yards, seven touchdowns and seven interceptions.

He feels more confident and patient after an offseason of reflection, video review and practice.

“When I got drafted, I wanted to show that I was a franchise quarterback here,” Haskins said. “Things happened and they made some changes around here. This new coaching staff, I just wanted to show them how much I love the game, the leader that I want to be and how I can be reliable in situations, make the right plays and potentially get some wins.”

After weeks of joking he'd announce his starter Sept. 13, Rivera went back to that Wednesday when asked who will be Haskins' backup. Smith still has not taken contact in his comeback from a broken fibula and tibia, making it likely Allen gets that role.