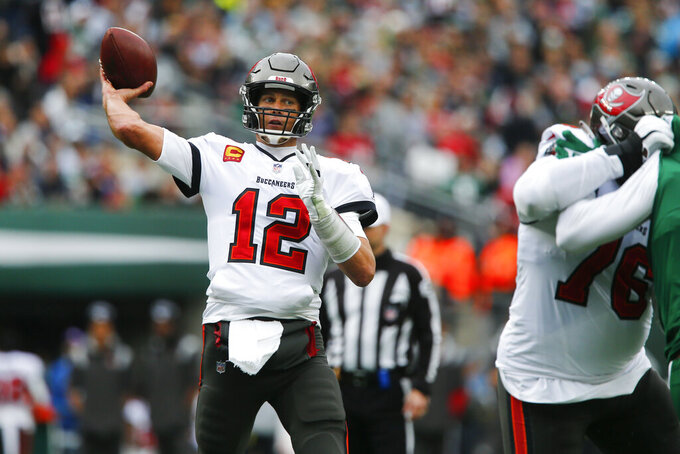 When Eric Church sang about “havin' a record year,” he wasn't referring to the NFL.

The country music star could have been.

For the 2021 season that ends this weekend with the first set of 17th games in league history, a slew of marks are about to be set. Major records, too.

Start with the most successful quarterback in NFL annals, naturally. Tom Brady leads in completions (456), yards passing (4,990) and touchdown passes (40). Tampa Bay's Brady is within striking distance of the single-season records for both passing yards (Peyton Manning's 5,477 for Denver in 2013) and completions (Drew Brees, 471 for New Orleans in 2016). Brady, of course, has that extra game to chase down Manning and Brees.

The Rams' Cooper Kupp leads in receptions with 138, receiving yards (1,829) and touchdown receptions (15) this season and is within striking distance of the single-season record for most receptions and receiving yards. The Saints' Michael Thomas, who won the Offensive Player of the Year award in 2019 when he had 149 catches, holds that mark.

“The most important thing is that we win the game, lock down the division title and be ready to move into the playoffs here,” Kupp said, "but it would be a very cool thing because of the respect I have for the players in this league and the talent that there is. It’s a tough thing to do.”

All records are tough to reach. If you have Brady throwing to you, though, extending a standard you've already set might be easier.

Bucs wide receiver Mike Evans enters this week with 946 receiving yards. With 54 against Carolina on Sunday, Evans will become the first player with at least 1,000 receiving yards in each of his first eight seasons.

That's something Bengals rookie Ja'Marr Chase might, well, chase as he moves along. Last week, Chase had 266 yards receiving, the most in a single game by a rookie. He now has 1,429 yards receiving the season, passing Minnesota's Justin Jefferson's 1,400 in 2020, a Super Bowl era mark. With 45 more yards at Cleveland on Sunday, he will surpass the Houston Oilers' Bill Groman's 1,473 in 1960 for the all-time rookie record.

In this season of spectacular newcomers at receiver, Miami's Jaylen Waddle seems bound for the record books. Waddle’s 99 receptions are second most by a rookie, and with three more he will beat the 2003 standard set by Arizona's Anquan Boldin.

Getting tight ends into the mix, Atlanta's Kyle Pitts has 1,018 yards through the year. If he gets 59 against New Orleans, Pitts will blow by Hall of Famer Mike Ditka's 1,076 in 1961 for the most.

On the other side of the ball, the sacks mark set by Hall of Famer Michael Strahan — and helped by Brett Favre's pratfall — could fall when the Steelers face the Ravens. With 1 1/2 sacks at Baltimore, T.J. Watt will break Strahan's' 2001 record of 22 1/2. The stat became official in 1982.

With two sacks at Philadelphia on Saturday night, the Cowboys' Micah Parsons can surpass Tennessee's Jevon Kearse, who had 14 1/2 in 1999 for the most sacks by a rookie. But Parsons was added to the Dallas COVID-19 reserve list.

Yes, the NFL seems to have a record for everything these days.