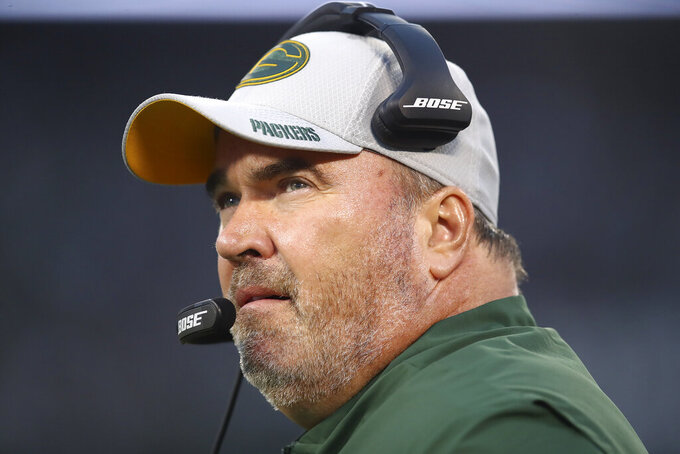 FILE - In this Aug. 24, 2018, file photo, Green Bay Packers head coach Mike McCarthy watches during the first half of an NFL preseason football game against the Oakland Raiders, in Oakland, Calif. The Dallas Cowboys didn't take long to settle on Mike McCarthy as their coach after waiting a week to announce they were moving on from Jason Garrett. McCarthy, who won a Super Bowl at the home of the Cowboys nine years ago as Green Bay's coach, has agreed to become the ninth coach in team history, a person with direct knowledge of the deal said Monday, Jan. 6, 2020. The person spoke to The Associated Press on condition of anonymity because the team hasn't announced the move. (AP Photo/Ben Margot, File) 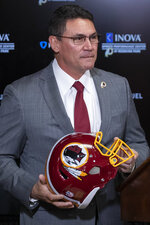 The Cowboys and Redskins went the experience route in their head coaching searches. The Giants and Panthers apparently are comfortable with newcomers to the job.

Dallas replaced Jason Garrett with a Super Bowl winner, Mike McCarthy, who was as successful in Green Bay as anyone this side of Vince Lombardi. Washington went with Ron Rivera, who twice won NFL Coach of the Year honors in Carolina and also took the Panthers to a Super Bowl.

Replacing Rivera will be Matt Rhule, a worthy college coach at Temple and Baylor, but with minimal time in the pros.

And the Giants, whose last two coaching choices, Ben McAdoo and Pat Shurmur, got fired, are on the verge of going with Joe Judge, New England's receiving and special teams maven.

Still open is the Cleveland job — doesn't it always seem to be? The Browns flopped with untested Freddie Kitchens in charge, so maybe they'll want someone of the ilk of McCarthy and Rivera. Then again, it's the Browns.

Of the four hires, only Rivera is a minority. Despite the push for diversity in coach hirings under the Rooney Rule, the NFL has only three other minority head coaches among the 32 teams: Pittsburgh's Mike Tomlin, the Chargers' Anthony Lynn, and Miami's Brian Flores.

As opposed to new owner David Tepper in Carolina, it appears longtime owners Jerry Jones in Dallas and Daniel Snyder in Washington went the safer route. That's understandable with the Cowboys, who underachieved in a big way this season and are far closer to contending than are the Redskins.

The 56-year-old McCarthy, who went to the playoffs nine times in 12-plus seasons with Green Bay and won his Super Bowl in Jones' stadium, is a solid fit in Big D. The Cowboys are expected to give Dak Prescott a longterm contract any day, and McCarthy is a QB-friendly coach.

He also is bringing a proven defensive coordinator, Mike Nolan, with him.

Rivera has a far bigger task to get the Redskins into the playoffs conversation, and he also has hired an established defensive coordinator in Jack Del Rio. Once Rivera was dismissed in Carolina, though, Snyder made enticing him to DC a goal. He reached that objective with the promise that the organization will undergo a “culture change” under Rivera.

“Someone that can bring a winning culture to our organization," Snyder said. “That starts and ends with our head coach.”

Washington's record since Snyder bought the team in 1999 is 142-193-1, with one postseason win. Rivera, who turned 58 on Tuesday, is the third experienced head coach Snyder has hired. The others were Hall of Famer Joe Gibbs, whose second stint was not memorable, and Mike Shanahan, who did not fare any better than recently fired Jay Gruden.

“I told him I didn't want to go through a five-year rebuilding process,” Rivera said of the owner. “I just don't have the patience, and from what I've read, neither does he, so we understand that.”

Patience certainly will be a virtue for the Panthers and Giants as they basically take a big risk on their hires.

Rhule, 44, has a history of rebuilding programs in difficult situations. But those were in college. He faces the same kind of challenge in Carolina: The Panthers had seven-game losing streaks in the second half of each of the last two seasons. Quarterback Cam Newton has had a string of injuries and barely played in 2019.

Rhule also seems set to bring along his defensive assistant at Baylor, Phil Snow, to be his coordinator. That sparked a strong reaction from former NFL executive Pat Kirwan on his SiriusXM program.

Judge has put in plenty of NFL time as a special teams and receivers coach in New England since 2012. He also worked under Nick Saban at Alabama.

His jumping to the head of New York's list was somewhat surprising — the Giants also had interest in McCarthy and Rhule. And until this season, not many Bill Belichick disciples had success as NFL head coaches.

But Houston's Bill O'Brien and Tennessee's Mike Vrabel — at the expense of the Patriots — won playoff games last Saturday. Flores worked wonders with a weak roster to win five games in Miami.