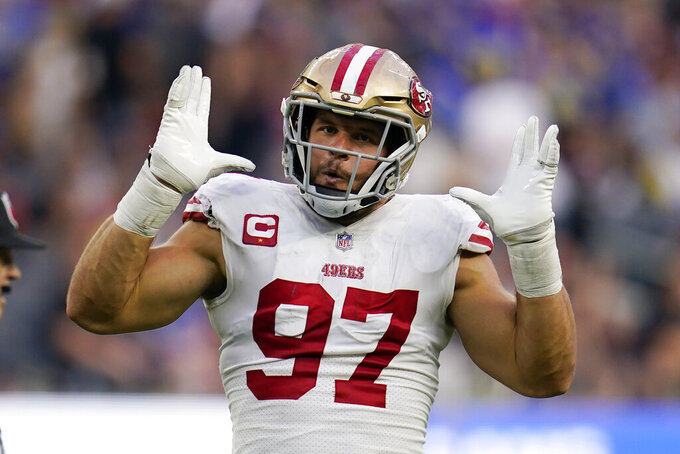 TURNOVER DIFFERENTIAL: Chargers plus-2; 49ers minus-3.

CHARGERS PLAYER TO WATCH: RB Austin Ekeler is tied for the NFL lead with 10 TDs (six rushing, four receiving) with all coming in the past five games. Last week’s game against Atlanta was his 10th career game with a rushing and receiving score.

49ERS PLAYER TO WATCH: QB Jimmy Garoppolo is coming off his best game of the season, completing 21 of 25 passes for 235 yards and two TDs against the Rams. Garoppolo has thrown at least two TD passes in four straight games, tied for the longest streak for the franchise since Jeff Garcia did it eight straight games in 2000.

KEY MATCHUP: Chargers edge rusher Khalil Mack vs. 49ers RT Mike McGlinchey. While Mack typically lines up on both sides, Los Angeles could look to use him more against the struggling McGlinchey instead of San Francisco LT Trent Williams. Mack has six sacks on the season, while McGlinchey has been beaten for four sacks the past two games.

SERIES NOTES: The Chargers have won the past five meetings in the series since a home loss in 2000. ... The most famous meeting between the franchises came following the 1994 season when the 49ers beat the Chargers 49-26 in the Super Bowl.

STATS AND STUFF: With next week’s game against Kansas City flexed to Sunday night, the Chargers are scheduled to play in a franchise-record six prime-time games, including three on Sunday night. ... Los Angeles is 4-4 in prime time with Justin Herbert as the starter. ... Herbert’s 96.0 passer rating in prime-time games is eighth since 2020 among QBs with at least 100 pass attempts. Herbert has gone four games without throwing for 300 yards, his longest drought since entering the league. ... WR Josh Palmer had his first 100-yard game last week (106 yards). He has at least eight catches in his past two games. ... TE Gerald Everett has at least five catches in four of the past five games. ... The Chargers offense is tied for second in the league with 20 drives of 10 plays or more. Los Angeles had four last week against Atlanta. ... The Chargers defense has allowed a run of least 40 yards in six of the past seven games. ... The Chargers lead the league with 14 strip-sacks since the start of last season. ... S Derwin James leads NFL DBs with 72 tackles. ... San Francisco is 2-3 following a bye week under coach Kyle Shanahan. ... The 49ers have gained 1,135 yards after the catch this season with 57.2% of their yards passing coming after the catch. That's the second-highest rate in the NFL. ... The Niners have allowed fewer than 20 points in six of their eight games. ... San Francisco has 11 turnovers in its four losses and just one in its four wins. ... The 49ers rank third in the NFL allowing 4.75 yards per play and are tied for sixth best with just 24 plays of at least 20 yards allowed. ... San Francisco's four wins have come by an average of 18.5 points per game. ... Niners WR Brandon Aiyuk has at least six catches and 80 yards receiving in the past three games. ... San Francisco DE Nick Bosa had 1 1/2 sacks in the previous game to give him 8 1/2 on the season. He has eight sacks in his past seven home games.

FANTASY TIP: Christian McCaffrey made a huge impact in his first full game with the Niners, becoming the fourth player since the merger to have a TD pass, run and catch in a game. McCaffrey had 149 yards from scrimmage in the game and figures to have a big role again this week.