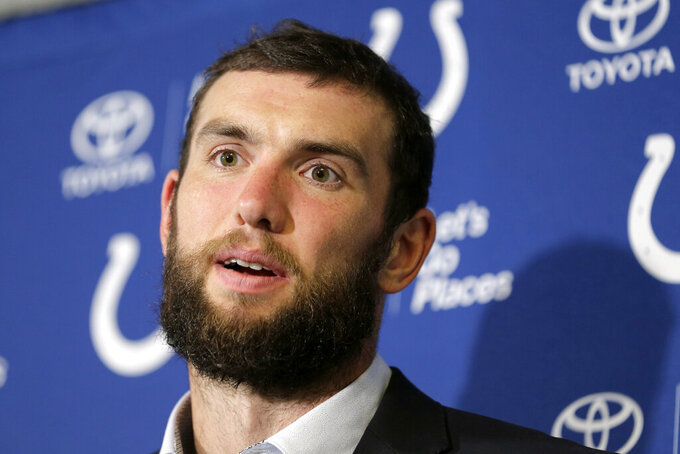 He loved every minute of it.

So when the star quarterback returned to the Indianapolis Colts complex Monday, he was rested, recharged and ready to start offseason workouts.

"I finally got a chance to get away," Luck said after the initial welcome back team meeting. "I talked to (general manager) Chris (Ballard) about that a little bit. He sort of challenged me to turn my mind off. It took a while, but I did get away. I feel refreshed. It was a very nice offseason."

At least it was different.

Luck didn't throw in either of the two previous offseasons, but not by choice. Instead, he followed doctor's orders while recovering from surgery on his throwing shoulder. This time, Luck opted for a well-deserved break after perhaps the best season of his pro career.

Plus, Luck had other plans.

After dating Stanford gymnast Nicole Pechanec for nearly a decade, the couple finally got married last month in the Czech Republic.

"Not much has changed besides a ring on the finger and she's got great insurance now," Luck cracked. "It's awesome. It was the best day of my life and probably the best offseason I ever had."

Dressed in 1970s disco garb, Luck and Trout cut it up on the dance floor — stirring up a conversation about Luck's groovy moves. He even heard from Stanford coach David Shaw, who emailed that his children rewound the commercial multiple times when they first saw it.

"My initial reaction to just about everything is no," Luck said. "Then I thought about it and talked to my agent. He said Mike Trout was interested and I admire him very much. Then thought about it and - why not? I think I feel much more comfortable making fun of myself than trying to be cool."

He wasn't the only Colts player to try his hand at performing.

All-Pro guard Quenton Nelson posted a video on Instagram of himself, bare-chested, mimicking the moves from a Cardi B video. The rapper and fans weren't the only ones who were watching.

"I don't know if Andrew was acting or not, but Quenton, I thought, was pretty good," center Ryan Kelly said. "As long as he (Nelson) keeps mowing people over in the running game, I don't care."

Nelson did not speak Monday.

But Luck said he is eager to get back to work nearly three months after the 2018 season ended with a divisional-round loss at Kansas City.

The good news: Not much has changed inside the locker room.

Indy has re-signed six of 15 unrestricted free agents, with receiver Ryan Grant the only player heading out of town. He signed with Oakland two weeks ago.

"With me doing a little bit of pass rushing, hopefully he'll help with how I use my hands, learning what moves to use here and what moves to use there," All-Pro linebacker Darius Leonard said. "Hopefully, I can stay in his back pocket and learn from him."

And now that the offseason is over, Luck can't wait to see how much he can improve on the big stage.

"I haven't thrown at all," Luck said. "I'll have a plan. Again, I have learned so many things over the past couple of years and part of that is building a plan and adjusting within it based on how you feel. We will certainly use the resources in the building and some other folks that help. So that's a big part of this offseason as well."