Heat have Bucks in serious trouble going into Game 3 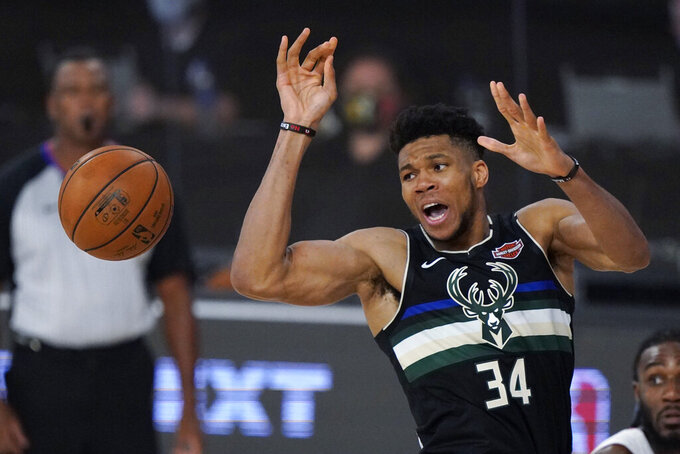 LAKE BUENA VISTA, Fla. (AP) — Having the NBA's best record during the regular season shows the obvious potential of the Milwaukee Bucks.

They are now, facing a pivotal Game 3 of their Eastern Conference semifinal series against the rolling Miami Heat on Friday night. The top-seeded Bucks have dropped the first two games to the fifth-seeded Heat, marking just the fifth time this season that they've had a multi-game losing streak.

“We've said it many times," Bucks coach Mike Budenholzer said. “I think your character really comes through when you face adversity, when you're tested. I think the character of this group is off the charts."

They are being tested now, so that theory better ring true for Milwaukee — or else.

The ending of Game 2 was bizarre, a close call looking like it would take a win away from Miami — Goran Dragic’s foul of Khris Middleton with the Heat up by three in the final seconds, a play where Middleton tied the game with three free throws.

Of course, then came Giannis Antetokounmpo’s foul of Jimmy Butler with no time left. Butler made a free throw for the win, made another because the rules said he had to take it, and the Heat left 116-114 winners and up 2-0 in the series.

“We're not focused on anything after Game 3," Bucks center Brook Lopez said. “We're not looking back on anything from Game 2 or Game 1. We're looking at what's in front of us."

The numbers are stacked very high against the Bucks:

— Milwaukee has never won a series when it loses the first two games (0-18).

— And, if the Bucks needed any proof that Friday is about as close to a must-win as a non-elimination game can be, NBA teams are 0-139 all-time in best-of-seven series when they lose the first three games.

“We have veteran guys that understand how tough a seven-game series is,” Heat coach Erik Spoelstra said. “Just how our guys’ bodies feel today has garnered the healthy, deep respect needed for our opponent. We know how dangerous they are. We know how much urgency they’re going to come out with ... and we have to do things at a high level.”

The Heat would be going home under normal circumstances for Games 3 and 4, and fans in South Florida are understandably thrilled with how things have gone — with the team 6-0 so far in the postseason. One of those fans, Miami Dolphins coach Brian Flores, wore a Heat T-shirt for his media availability Thursday instead of Dolphins attire.

“They’re tough, they’re physical, they grind things out, they play smart basketball,” Flores said, remarks that eventually made their way to an appreciative Spoelstra. “Hopefully we can learn from a lot of the things they do and emulate a lot of the success they’ve had.”

There are two games inside the NBA bubble Friday, the other being Game 1 of the Western Conference semifinal series between the top-seeded Los Angeles Lakers and fourth-seeded Houston Rockets.

A look at Friday’s Bucks-Heat game:

— NEED TO KNOW: The only time a No. 5 seed has led 2-0 in any series, other than a first-round matchup, was in the 1994 West semifinals when fifth-seeded Utah won the first two games against eighth-seeded Phoenix. But Miami forward Jae Crowder has been part of a successful rally from a 0-2 series hole, helping Boston rally past Chicago in six games in 2017 -- and is reminding his teammates that they’ve clinched nothing yet. “You can’t get too high or too low on yourself,” Crowder said.

— KEEP AN EYE ON: Budenholzer. The Bucks coach never has Antetokounmpo and Middleton play big minutes — Middleton logged 40 in one game this year, and that was an OT contest — but bench players Marvin Williams, Pat Connaughton and Donte DiVincenzo are a combined 5 for 22 in 103 minutes in the series. Budenholzer may have to tighten the rotation.

— PRESSURE IS ON: Milwaukee. The Bucks are only 7-8 so far in the bubble. Granted, some of those games were meaningless since the Bucks had the No. 1 seed in the East wrapped up. But they have yet to look like the team that was an NBA title favorite before the season was interrupted. It’s now or never time for the Bucks, who are 1-4 against Miami this season and 59-16 against the rest of the league.