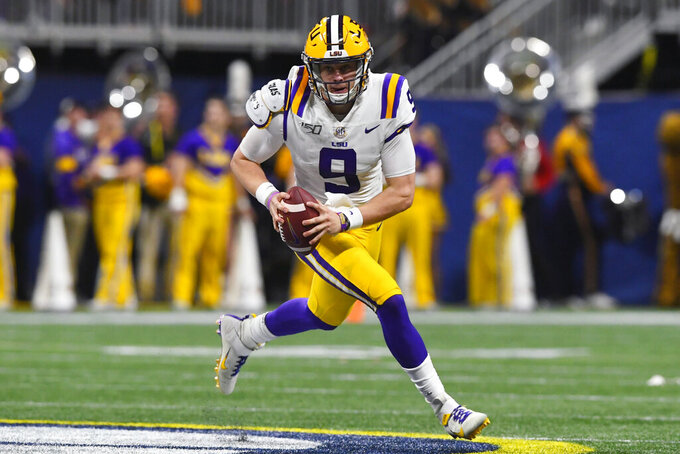 FILE - In this Dec. 7, 2019, file photo, LSU quarterback Joe Burrow (9) runs down field against Georgia during the first half of the Southeastern Conference championship NCAA college football game in Atlanta. Burrow is expected to be a first round pick at the NFL Draft on Thursday, April 23, 2020.(AP Photo/John Amis)

CINCINNATI (AP) — Joe Burrow's next challenge is daunting: return to his home state and resurrect the woebegone Bengals. Given what he's accomplished, he's not lacking in confidence.

Cincinnati took the Heisman Trophy winner first overall in the NFL draft Thursday night, a move expected by everyone, including Burrow. The national title winner at LSU has spent weeks fielding questions about going to a franchise synonymous with futility.

He knows exactly what he's getting into.

Burrow developed his quarterback skills a few hours away in southeastern Ohio, leading his prep team to the playoffs. A failed stint at Ohio State became a launching point to a national title and Heisman Trophy at LSU.

For the draft Thursday, he wore a white shirt with the outline of Ohio and the 740 area code for southeast Ohio. He also held a black Bengals cap, waiting for the pick.

When the Bengals called to make it official, he donned the cap and became the face of the franchise.

“We will never pick at No. 1 again,” coach Zac Taylor said. “We don't want to pick in the top 10 again. We're looking at this as the only time you're going to get this caliber player to add him to the program, so obviously this is a big deal.”

Burrow’s roots in Ohio made him even more desirable for a team that's had some of the league's lowest attendance figures for years and will be renegotiating its lease for the stadium — named after founder Paul Brown — in a few years.

There’s a lot riding on this draft pick.

“He's been in the area and he knows what we're all about,” Taylor said. “There's probably people in the area who know what he's about and will probably be drawn to the Bengals.”

He moves to a team that went 2-14 last season in Taylor's first year, losing a club-record 11 games in a row. Cincinnati has lost 21 of its last 24 games.

That's what the Heisman winner is up against now.

Not that it's all up to Burrow, of course. In Cincinnati, it's about ownership. The Bengals have been through a dizzying list of coaches, coordinators and quarterbacks during one of the worst stretches in the league's 100-year history.

They've had only seven winning seasons in the last 29 years, a stunningly bad result in a league built upon parity. They haven't won a playoff game since the 1990 season, the fifth-longest streak of postseason futility.

The Bengals have had 18 different starting quarterbacks over that span, including Heisman Trophy winner Carson Palmer in 2003 who eventually demanded a trade rather than stay with the franchise.

“I think it's going to be a winning franchise for years to come and I want to play a part in it," Burrow said.

Burrow's career bloomed in Athens, Ohio, where his father, Jim, was an assistant coach at Ohio University. He took his high school team to the playoffs and went to Ohio State, where he failed to win the starting job. He transferred to LSU, where he had one of the best seasons by a quarterback in college history. Burrow threw a record 60 touchdown passes as the Tigers rolled to the national title last season.

The Bengals were impressed by his accuracy and good decision-making. Burrow really won them over when they talked during the lead-up to the draft.

“He came across to me like a guy that's been playing NFL football for 10 years,” offensive coordinator Brian Callahan said. “His knowledge was far superior to most kids coming out of college.”

He’ll supplant Andy Dalton as the face of Cincinnati’s franchise. Dalton has one year left on his contract and the Bengals are considering keeping him around to help Burrow get acclimated in an unusual offseason limited by coronavirus precautions.