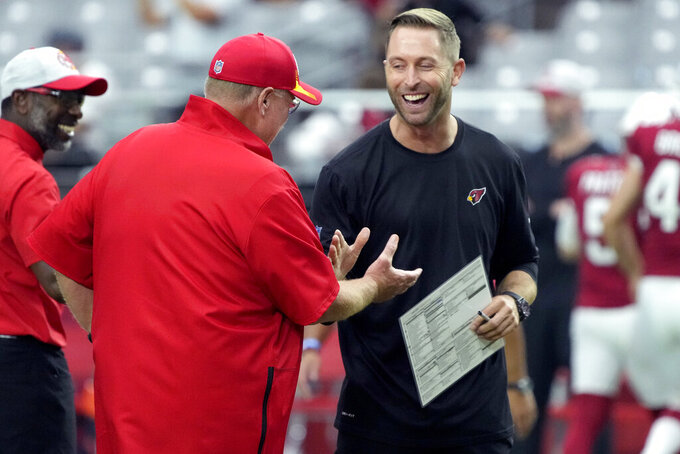 Henne and Buechele each threw a touchdown pass. Mahomes started and completed 10 of 18 passes for 78 yards, no touchdowns and one interception. The 2018 Most Valuable Player led two 15-play drives in his most extensive action so far this preseason.

The first 15-play drive ended on a 24-yard field goal by Harrison Butker and the second abruptly stopped when Byron Murphy Jr. intercepted Mahomes' pass in the end zone. It was the one major miscue in an otherwise encouraging performance for Kansas City's starting offense.

“It felt good,” Mahomes said. “I thought we had some good drives, a few long drives where we got to run the ball, throw the ball, do all the different type of stuff.”

Henne was 6 of 8 for 82 yards and a touchdown. Buechele — a rookie — was 9 of 11 for 115 yards with a touchdown and an interception. Byron Pringle caught four passes for 63 yards.

Kansas City (2-0) led 10-0 at halftime. Juan Thornhill snagged an interception on a diving catch with 30 seconds left in the second quarter to stop a promising Arizona drive.

“All in all, I was pleased with the defense and how they played,” Kansas City coach Andy Reid said. “All in all, I thought it was a good game. Offensively we had a lot of yards, a lot of plays and probably could have had more points in that first half.”

Arizona quarterback Kyler Murray saw his first preseason action, playing the first three series. He was 1-of-4 passing for 2 yards and also gained 8 yards on the ground. The Cardinals (1-1) didn't get a first down on any of the possessions.

“It would have been good to get a touchdown,” Cardinals left tackle D.J. Humphries said. “But I definitely don’t think the sky is falling.”

Backup Colt McCoy was 13 of 18 for 113 yards and one interception. The Cardinals managed just 239 total yards.

“Not real sharp offensively,” Kingsbury said. “But that happens. They played good defensively and we have a lot to work on this week.”

Kansas City pushed ahead 17-0 midway through the third quarter when Buechele hit Jerick McKinnon for a 5-yard touchdown strike.

The Cardinals scored for the first time when Matt Prater made a 22-yard field goal late in the third. Chris Streveler connected with Ross Travis on a 20-yard touchdown pass with 9:03 left in the fourth.

The game was a reunion for Kingsbury and Mahomes, who played for Kingsbury in college at Texas Tech. The two talked on the field before the game.

Kingsbury's success in helping Mahomes develop into an NFL-caliber quarterback is part of the reason he got the job with the Arizona Cardinals prior to the 2019 season. Mahomes threw for more than 5,000 yards over 12 games in his final season at Texas Tech and was then drafted by the Chiefs, where he's led the franchise on back-to-back Super Bowl runs.

Chiefs: RB Darrel Williams left the game in the second quarter and was evaluated for a concussion. ... WR Tyreek Hill went through pre-game warmups but didn't play because of a tight hamstring.

The Chiefs wrap up their preseason schedule at home against the Minnesota Vikings on Aug. 27.

The Cardinals play their final preseason game on the road against the New Orleans Saints on Aug. 28.