Henry leads into AFC South lead with 45-26 over Colts 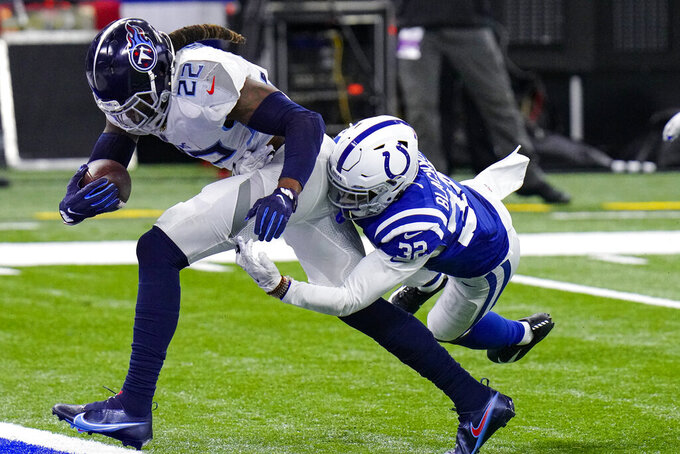 Tennessee Titans running back Derrick Henry (22) gets past Indianapolis Colts free safety Julian Blackmon (32) for a touchdown in the first half of an NFL football game in Indianapolis, Sunday, Nov. 29, 2020. (AP Photo/AJ Mast) 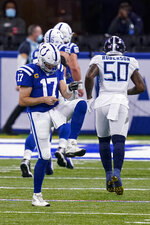 Now the bruising back can focus on other daunting tasks, like clinching the division title and making another long playoff run.

Henry battered the NFL's second-stingiest defense by rushing for 178 yards and three touchdowns, leading the Titans to a 45-26 rout at Indianapolis.

Don't mistake Henry's workmanlike demeanor for the significance of this victory.

Tennessee (8-3) now has sole possession of the division lead over Indy (7-4), a split in the two-game season series and the current tiebreaking edge based on the teams' division records.

Henry made all the difference in this one. He did the heavy lifting with 27 carries, breaking tackles, eluding defenders and occasionally dragging along those who tried to bring him down.

It was his third consecutive 100-yard game, his seventh this season and his eighth straight on the road, tying former Titans running back Chris Johnson for the second-longest streak since the 1970 merger. Only Hall of Famer Barry Sanders (10 in 1996-97) had a longer streak.

“We just we did not execute," Colts coach Frank Reich said. “In big games, it’s about doing the little things right. We didn’t do that. At times, we have done that right in the big games. We didn't do that today."

Indy tied the score with an 11-yard pass from Philip Rivers to Trey Burton, but Ryan Tannehill made it 14-7 with a 69-yard scoring pass to A.J. Brown. Indy answered with Jacoby Brissett's 1-yard TD run, and then Henry went back to work.

The NFL rushing leader scored on a 1-yard run midway through the second quarter, and then added an 11-yard TD run to make it 28-14. He played the perfect decoy to free Tannehill for a 1-yard TD run to give the Titans a 35-14 halftime lead.

Henry had 140 yards rushing at the break, and Indy never recovered.

“We like to establish the run game whether we’re at home or away, and Derrick is consistent," Tannehill said after going 13 of 22 for 221 yards. “He does his thing no matter where we’re at. He’s a football player, and a really good one at that."

Colts: In addition to losing Buckner and Autry (reserve/COVID-19) and Okereke (ankle), Indy played without center Ryan Kelly (neck) or running back Jonathan Taylor (COVID-19). Left tackle Anthony Castonzo hurt his knee in the second quarter and safety Khari Willis left with back and quad injuries in the second half. Neither returned.

Titans: It was Henry's 20th straight game with at least 18 carries, the league's second-longest streak since 1948. ... Henry has three 100-yard games against Indy since 2018 — the only three against the Colts during that span. ... Tennessee rushed for 230 yards and had a season-high scoring total. ... Brown became the fourth player in franchise history — the first since Drew Hill in 1988-89 — with eight TD receptions in consecutive years. He had four catches for 98 yards and returned an onside kick 42 yards for a score.

Colts: Indy allowed more points in the first half than in any full game previously this season. Their previous high was 32 by Cleveland. ... Rivers was 24 of 42 for 295 yards, two touchdowns and one interception in his 235th consecutive start. He's tied with Charles Woodson for ninth on the NFL's career starts list. ... T.Y. Hilton caught four passes for 81 yards and his first TD this season, becoming the sixth player in Colts history with 9,000 yards from scrimmage and the fourth with 9,000 yards receiving.

Colts: Indy begins a two-game road trip with a stop at Houston next Sunday.