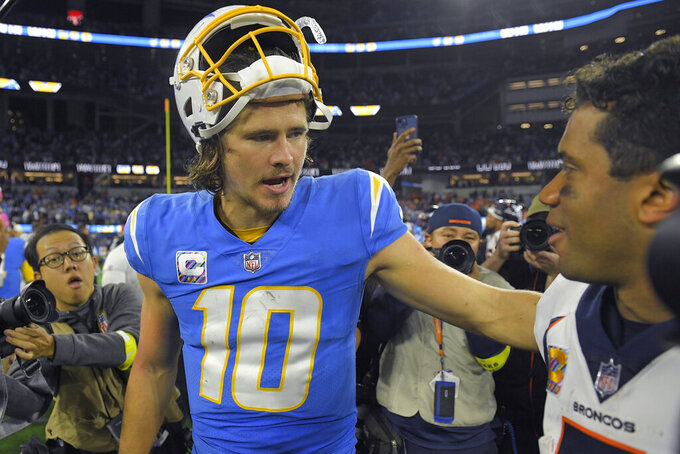 COSTA MESA, Calif. (AP) — Who would have thought six weeks ago Justin Herbert’s ribs would be the least of the Los Angeles Chargers’ concerns?

The star quarterback continues to progress from his early season injury, but he has seen his favorite targets and other key players end up sidelined.

The Chargers’ lousy luck with injuries seems to be a theme every year, but the first seven weeks of this season have been especially tough.

Despite that, the Chargers are 4-3. But as the players get a well-deserved couple of days rest on their bye week, coach Brandon Staley and his staff need to figure out how to contend with a short-handed roster, especially on offense.

The one constant Staley has been able to count on is Herbert’s ability to weather everything around him.

“I know that it’s probably one of the first times where there has been a lot that’s happened around him, including within himself in dealing with an injury for the first time,” Staley said. "He’s experiencing a lot of tough stuff that happens in the NFL, and he’s who he always is. He’s poised and steady.”

Entering Week 8, Herbert is tied for the league lead in completions (203), third with 2,009 passing yards, and fifth with 12 touchdown passes despite playing most of the season with fractured rib cartilage. The injury occurred when he took a brutal hit during the fourth quarter against Kansas City on Sept. 15, but he missed only one play.

After struggling in a Week 3 loss to Jacksonville, Herbert passed for 340 yards and two touchdowns the following week at Houston. Last Sunday’s game against Seattle marked the first time he wasn’t on the injury report in four weeks.

“It’s just continuing to progress, get better, do everything I can to rehab, to get treatment and take care of my body,” Herbert said. “As long as you stay ahead and get after it, I think you can limit those.”

Making the Chargers’ run of injuries worse this season is that nearly all of the significant ones have happened on their home field at Hollywood Park.

Wide receiver Keenan Allen strained a hamstring during the Sept. 11 opener against Las Vegas that would sideline him for five games. Two weeks later against Jacksonville, All-Pro offensive left tackle Rashawn Slater (biceps) and wide receiver Jalen Guyton (knee) suffered season-ending injuries. Linebacker Joey Bosa had a groin injury that will keep him out until at least December.

In the Oct. 17 Monday night overtime win against Denver, Dustin Hopkins kicked four field goals, including the game-winner, but strained his hamstring after the first kick.

This past Sunday, cornerback JC Jackson was lost for the season after rupturing the patellar tendon in his right knee. In the fourth quarter, Mike Williams suffered a high right ankle sprain that will keep him out for at least four weeks.

Of the five receivers that made the opening week roster, DeAndre Carter is the only one that hasn’t been sidelined.

“That group has been banged up. It hasn’t played together very much, that’s for sure,” Staley said. “We have to make improvements, for sure, on our whole offensive football team. I want to see that group together playing because that hasn’t been able to happen yet so far this season.”

Herbert has gone three straight games without going over 300 yards for the first time in his three-year career. He is 1 of 13 on passes of 20 yards or more in the past three games.

With the injuries at receiver, Austin Ekeler has become the first running back in 18 years to have at least 10 catches in consecutive games. His 53 receptions are third in the league entering Week 8. Tight end Gerald Everett has also stepped up with at least five receptions in three of the past four games.

It also hasn’t helped that the running game has been inconsistent. The Chargers are averaging 88.9 yards per game on the ground, the seventh-worst mark in the league, and have the league’s fourth-biggest disparity between running and passing rates. They’ve gone to the ground only 34.4% of the time compared to passing it 65.5%.

Entering Week 8, Ekeler is tied for the league lead with eight touchdowns and is third among running backs with 737 scrimmage yards. More than half of those yards have been receiving. Of his 380 yards rushing, a career-high 173 came in the win Oct. 9 over Cleveland.

Even though the offensive line has struggled with run blocking, it has kept Herbert clean. Herbert has been sacked only 10 times. The line has two rookies, with sixth-round pick Jamaree Salyer taking over for Slater at left tackle and first-round selection Zion Johnson at right guard. All-Pro center Corey Linsley has also missed two games.

Staley’s goal during the bye week is to get more consistency out of the running game while increasing the number of explosive plays. Getting back Allen and Joshua Palmer should help the passing game expand.

Four of Los Angeles' next five games are on the road as it tries to get to the playoffs for the first time since 2018. The Chargers' only home game during that stretch is Nov. 20 against Kansas City.

“I think that over the next two weeks, it’s just us coming together," Staley said, "and making sure that in the second half of the season, we go into that week and try to maximize this group.”