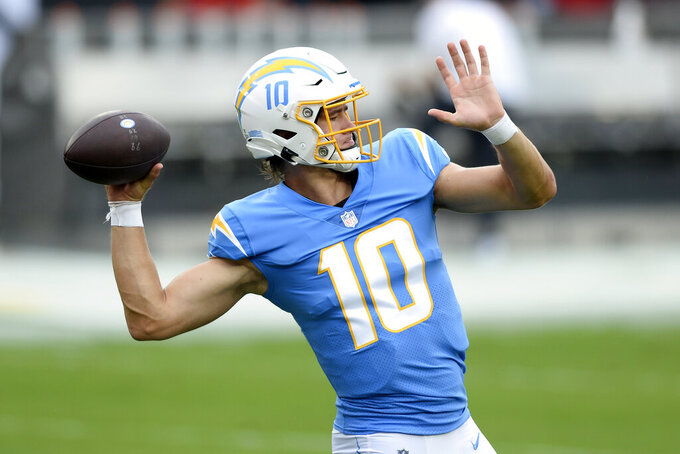 COSTA MESA, Calif. (AP) — Justin Herbert found out earlier this week that he will remain the Los Angeles Chargers starting quarterback, but the rookie hasn't had much time to let that sink in.

Herbert has played well in his three starts since replacing an injured Tyrod Taylor, but he is still looking for his first win going into Monday night's road test against New Orleans.

Coach Anthony Lynn made the announcement on Thursday that Herbert would remain based on his performance the first three games. Herbert, who was the sixth selection in April's draft, has thrown for at least 290 yards in each game. He was elevated to the starter when Taylor could not go in the Sept. 20 game against Kansas City after a team doctor punctured his lung while trying to give him an injection due to a rib injury suffered in a Week 1 win at Cincinnati.

Taylor returned to practice this week, but has been declared out for a fourth straight game.

Even though Herbert is feeling pressure to end the Chargers' three-game losing streak, the best advice he has received this week is that he doesn't have to look over his shoulder expecting to be pulled.

“I just have to go out there, relax and not worry about making the perfect throw. Everything else will take care of itself,” he said.

Herbert's 930 yards are second in NFL history for QBs through the first three games of his career. He is seventh in the league with a 72% completion rate but has also thrown three interceptions and fumbled while being sacked.

Opponents have scored 28 points off six Chargers turnovers the past three games, which has been disastrous for a team that has a lost by a combined margin of 15 points to the Chiefs, Panthers and Buccaneers.

Herbert said avoiding turnovers has been an increased amount of emphasis this week. He also added that he hasn't changed his approach even though he knows there is no longer an interim tag next to his name.

“I think one of the beautiful things about these past couple weeks is I’ve prepared like I was the guy. I don’t think we need to change anything and the wins will come,” he said.

Herbert will be without running back Austin Ekeler (hamstring) for at least the next three games but wide receiver Mike Williams could be back after missing last week's game at Tampa Bay due to a hamstring injury. Williams is questionable while right guard Trai Turner (groin) and tackle Bryan Bulaga (back) were declared out on Saturday.

Defensive end Joey Bosa is also questionable as he is dealing with tricep and knee issues.