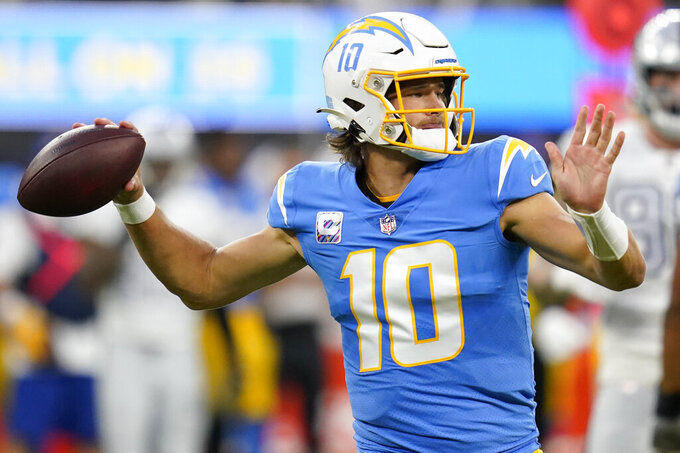 LOS ANGELES (AP) — Justin Herbert and Baker Mayfield are at the helm of 3-1 teams as the Los Angeles Chargers host the Cleveland Browns on Sunday. The quarterbacks come into the matchup on different trajectories.

Herbert is second in the league with 113 completions and continues to be the darling of the Los Angeles fan base as the Chargers are off to their best start in seven years. The Bolts have a short week to prepare after Monday night's 28-14 victory over the Las Vegas Raiders. He isn't looking back on an early-season stretch that has included wins at Washington and Kansas City.

After committing four turnovers in the first two games, including three in the red zone, Herbert has seven touchdowns and no turnovers the past two weeks, along with a 116.3 passer rating.

Mayfield has directed the Browns to three straight wins, but is under increasing scrutiny from Cleveland fans after having one of the worst games of his career last week. It came out on Thursday that Mayfield has a partially torn labrum in his left, non-throwing shoulder that does not require surgery.

Cleveland is coming off a 14-7 victory at Minnesota, where Mayfield completed 15 of 33 passes and twice missed star receiver Odell Beckham Jr. for possible touchdowns. It was an alarming performance for Mayfield, who led the NFL with an 81.6% completion rate after two weeks but has been erratic the past two.

Mayfield, who had his shoulder pop out while he attempted to make a tackle last month against Houston, will soldier on. He is wearing a harness on the shoulder.

After addressing the media this week to discuss his struggles, Mayfield posted a message on Instagram that seemed aimed at his critics. He reminded fans he has the strength to overcome adversity.

Mayfield was complimentary toward Herbert, and joked that he hasn't had a chance to sit down and talk with him or get at him for breaking his rookie touchdown passes record last season.

Both quarterbacks will face challenges from two of the league’s top pass rushers. Cleveland’s Myles Garrett leads the NFL with six sacks and the Chargers' Joey Bosa has 2 1/2 while being a major threat for blockers.

Cleveland leads the league in rushing yards (177.0 per game) and faces a defense that is fourth worst at stopping the run.

Nick Chubb is second in rushing with 362 yards, while Kareem Hunt has 355 yards from scrimmage. Chargers linebacker Drue Tranquill pointed out that gang tackling and limiting yards after contact are points of emphasis this week.

“I think that speaks to what Cleveland’s trying to do, philosophically, in terms of wearing you down and being able to take over in the fourth quarter," he said. "I think that swarm to the ball — the second, third guy in getting shot attempts at the ball — is going to be very crucial for us to be successful against them.”

Los Angeles running back Austin Ekeler is coming off his second career 100-yard game. Ekeler receives around 18 touches per game in the run and passing game, but he will likely be counted more as a runner this week. Ekeler is averaging 5.66 yards per carry, fourth among running backs.

Cleveland’s defensive turnaround the past two weeks has been led by its twin tackles: Malik Jackson and Malik McDowell. The Maliks in the middle have been disruptive and more.

“Those two dudes, man, they get after it,” said Browns safety John Johnson III. “I saw it a few times there was a little bit after the play. Luckily, we didn’t get a flag, but it’s just rushing, it’s violent. It’s physical and they love it.

“They just want to attack people.”

The Browns sacked Bears rookie Justin Fields nine times two weeks ago and they were in the face of Vikings quarterback Kirk Cousins all game last week.

A 10-year veteran, Jackson said he takes the field telling McDowell, who was drafted in 2017 but is playing for the first time this season, to dominate.

Chargers wide receiver Mike Williams. He was held to just one catch against the Raiders, but should factor more into the passing attack this week because Herbert will need to rely more on quick passes to counter Cleveland's pass rush.

Williams has 11 receptions within 5 yards of the line of scrimmage after having only 12 last season.

Sports Writer Tom Withers in Cleveland contributed to this report.