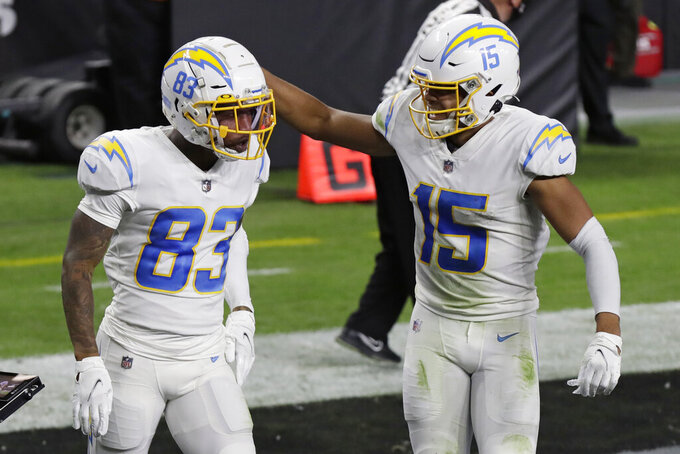 It has come too late for the Los Angeles Chargers this season, but back-to-back game-winning drives by Justin Herbert could bode well for future seasons.

Herbert's 1-yard keeper in overtime Thursday night gave the Chargers a 30-27 victory over the Las Vegas Raiders and completed his second bit of late-game heroics in five days. He also led the Bolts into range for a field goal on the final play in last Sunday's 20-17 win over Atlanta.

“It's very important we close these games out. You see a lot of times when teams finish strong they start fast the following season,” coach Anthony Lynn said.

Herbert was 22 of 32 for 314 yards and two touchdowns against the Raiders. He has seven 300-yard games — which are the most for a rookie QB — and has tied Baker Mayfield's 2018 mark with 27 touchdowns. He also has a league-high nine completions of 50 yards or more.

Even more important for the Chargers (5-9) is that they bounced back with two straight wins after their 45-0 loss to New England on Dec. 6.

“A couple weeks ago we got beat pretty bad,” tight end Hunter Henry said. “We've got a bunch of fighters. We got backed up into a corner but kept swinging.”

With Keenan Allen and Mike Williams limited due to injuries, the reserve receivers stepped up. Jalen Guyton had four receptions for 91 yards, including a 53-yarder in overtime down to the Raiders' 2. Tyron Johnson hauled in his third TD of the season and rookie KJ Hill saw his most extensive playing time to date with three catches for 39 yards.

The defense has allowed over 150 rushing yards in three of the past four games with quarterbacks going over 30 yards. Marcus Mariota's 88 yards were the third-most the Chargers have given up to a QB in franchise history.

Chris Harris Jr. had his best game since returning from a foot injury three weeks ago. The cornerback had five tackles, a pass defensed and his first interception in over a year. Harris got a great read on a ball intended for Zay Jones, picked it off and returned it 51 yards to the Raiders 33. Coincidentally, Harris' last pick was also against Mariota when Denver played Tennessee.

Michael Badgley missed two fourth-quarter field goals as doubts persist about whether he is truly the right kicker for the Chargers. Badgley is 17 of 17 within 45 yards and is one of nine kickers still perfect from that range. But from 46 yards and beyond he has made only three of 12, including his last five. The 25% accuracy rate is second-worst.

Lynn said he was hopeful LB Kyzir White's injury, which was undisclosed, is not that serious. DE Joey Bosa continues to be evaluated for a concussion.

60 — Receptions for Hunter Henry, which is a career high for the fifth-year tight end. He had 55 last season. This is also the first time since 2017 that Henry has played in at least 14 games in a season.

The Chargers get a little bit of a late-season mini-bye before playing their final two games. They have their final home game of the season on Dec. 27 against the Denver Broncos. LA had a 24-3 lead during the third quarter of their Nov. 1 game before Denver rallied for a 31-30 victory on the last play of the game.