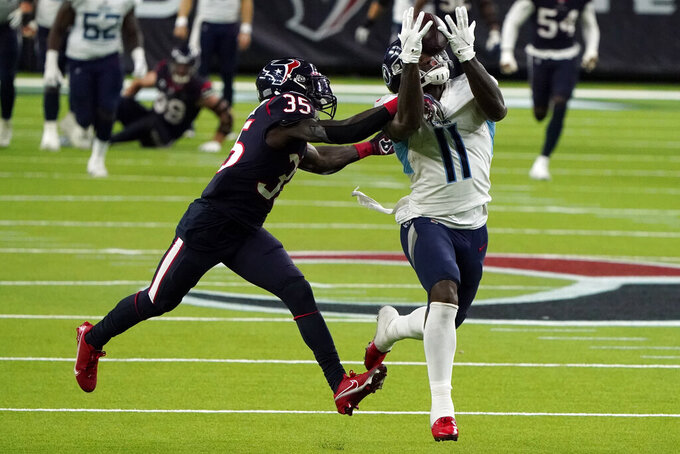 The Tennessee Titans are bringing their high-scoring ways and flair for last-second dramatics to the postseason.

And for the first time since the 2008 season, the Titans get to start the playoffs at home.

“Our first goal was to win the division, host a home playoff game," Titans coach Mike Vrabel said Monday. "Now it’s about winning that next game, that next playoff game against an opponent that we have a lot of respect for, that are playing very well and is no stranger to playoff football.”

The Titans (11-5) won their first AFC South title in 12 years by beating Houston 41-38. They had to rally after blowing a 16-point lead and needed Ryan Tannehill to hit A.J. Brown with a 52-yard pass to set up rookie Sam Sloman for the winning field goal, which bounced off the right upright and through as time expired.

“The emotions leading up to the field goal and the doink, I mean almost gave me an ulcer on the sideline," Titans safety Kevin Byard said. " It was pretty intense. But God work in mysterious ways and happy we got the W.”

That was the Titans' sixth victory when they scored the winning points in the final minutes of the fourth quarter or overtime. Tannehill says the Titans are a very resilient group and this is nothing new for them.

“Guys believe in each other, this team, and as long as there is some time left, we’re going to keep playing our tails off and try and win the game," Tannehill said.

That earned the Titans their second straight playoff berth under Vrabel and third in four seasons. They get to prove themselves Sunday by hosting the Baltimore Ravens, the team Tennessee beat in the divisional round a year ago.

The offense. The Titans just had the most yards in franchise history (6,343), the second-most points (491), and became the first team in NFL history with a 2,000-yard rusher and 3,500-yard passer in the same season. Only Kansas City averaged more yards per game than Tennessee's 396.4 yards, and the Titans ranked fourth in scoring 30.7 points a game.

Derrick Henry is the eighth man in NFL history, and second in 11 years for Tennessee, with 2,000 yards rushing (actually 2,027). He also led the league with 17 rushing touchdowns. Tannehill finished with 3,819 yards passing, and he had a career-high 33 TD passes and seven TDs rushing.

Tennessee is scheming and trying to survive on defense at this point by forcing turnovers. The Titans did climb out of the NFL cellar by coming up with a season-high four sacks in the regular-season finale. They finished 30th with 19 sacks, the fewest by a team reaching the playoffs since Denver had 19 in 1979.

Henry. The first man to go back-to-back leading the NFL in rushing since LaDainian Tomlinson just keeps piling up yards and chunks of history for himself. While reaching 2,000 yards, Henry also ran for a career-best 250 yards, which tied for the 13th-best single-game total in the NFL since 1948.

Corey Davis. The wide receiver cost himself his first 1,000-yard receiving season with three drops. Davis, who's in the final season of his rookie contract, finished with a career-high 984 yards on 65 catches.

Left guard Rodger Saffold hurt an ankle and didn't finish the game in Houston. The Titans already are on their third left tackle of the season in David Quessenberry.

11 — The Titans finished the season leading the NFL with a plus-11 turnover margin. They tied for seventh with 23 takeaways and only Green Bay had fewer giveaways than Tennessee's 12.