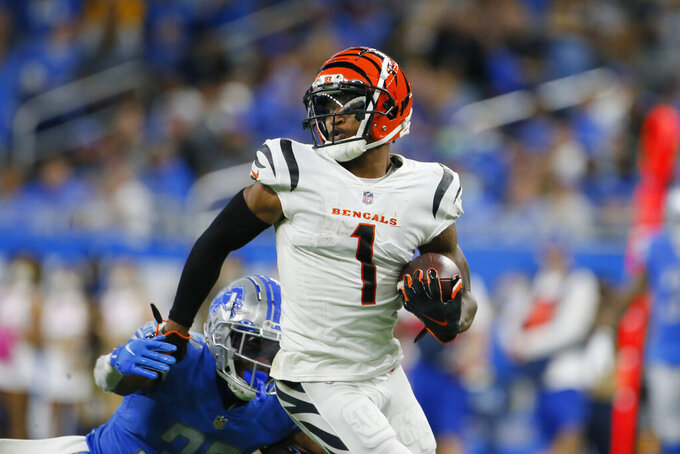 CINCINNATI (AP) — On fourth-and-short just inside the Lions 40 yard line, Cincinnati quarterback Joe Burrow rolled right and dumped a short pass to Joe Mixon out of the backfield.

As Mixon raced down the sideline, he picked up a wingman in rookie receiver Ja'Marr Chase. Detroit safety Will Harris closed in for the stop, but Chase slammed into him at the 15-yard line and then, for good measure, put the stumbling defender on the ground with another shove. Mixon stepped over Harris on his way to the end zone.

The block — Chase called it his best one ever — was another highlight moment for the rookie from LSU who couldn't seem to hold on to a pass in the preseason, but has since played his way into the conversation for Offensive Rookie of the Year.

“That’s a more exciting play for me than Ja’Marr catching a go-route vs. Pittsburgh for a touchdown,” Cincinnati coach Zac Taylor said of the block that helped put the Bengals up 17-0 in the third quarter of Sunday's 34-11 rout of Detroit.

“(The touchdown) was a great moment, but helping a teammate achieve a great play is, as a coach, what you love to see,” Taylor said. “People congratulating him as much as they were congratulating Mixon after the play, that’s great to see as a coach."

Chase and Burrow have rekindled the chemistry that carried them to a national championship as LSU teammates in 2019.

His five catches of least 40 yards are the most in the NFL.

The 21-year-old had four catches on Sunday for a team-leading 97 yards. A 34-yard grab on third down near the end of the first half set up Evan McPherson's field goal, and a 53-yarder at the end of the third quarter led to a score that put Cincinnati up 27-0.

“Ja'Marr just keeps being that spark for us,” Burrow said. “When we have a guy like that, and when you have the connection we have, (they) can't fall asleep on defense when you have that guy.”

It wasn't lost on anybody on the Bengals sideline that the Lions huge offensive lineman, Penei Sewell — a player many thought would be taken by Cincinnati instead of Chase as the first draft pick — struggled last week to contain Bengals defensive end Trey Hendrickson.

After the game, it was Chase's block that was being replayed on the TV highlight shows and social media.

“I keep telling everybody, that was his touchdown, it wasn't mine," said Mixon, who invoked the name of Hall of Famer Jerry Rice in describing Chase's versatility.

“There’s a lot made of these receivers because of their talent and big-play production,” Taylor said. “Their catches, their dances and all that stuff. But they’re selfless. They care about their teammates."

All part of the job.

“Details,” Chase said. “That's what NFL games come down to — small details. If I can do it all, that just opens it up for everyone."

The Bengals (4-2) travel to Baltimore for a key game against the AFC North-leading Ravens (5-1) on Sunday.

NOTES: Burrow didn't speak to reporters Wednesday, with the team citing a throat bruise that affected his voice. ... OT Hakeem Adeniji (pectoral) has been cleared to practice.