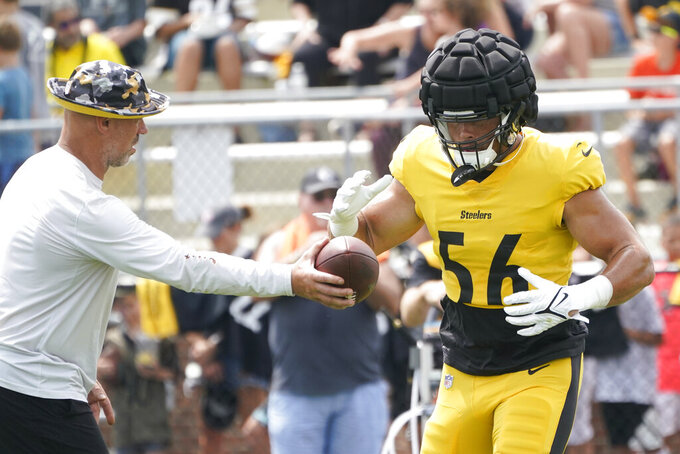 FILE - Pittsburgh Steelers linebacker Alex Highsmith (56) goes through drills during practice at NFL football training camp in the Latrobe Memorial Stadium in Latrobe, Pa., on Aug. 8, 2022. Highsmith starred on the right side during his first full season as a starter. This year, Highsmith wants to cause greater havoc opposite teammate T.J. Watt, the reigning AP Defensive Player of the Year. (AP Photo/Keith Srakocic, File)

LATROBE, Pa. (AP) — Pittsburgh Steelers outside linebacker Alex Highsmith wants to make an even bigger impact on the defense this season.

Highsmith starred on the right side during his first full season as a starter. This year, Highsmith wants to cause greater havoc opposite teammate T.J. Watt, the reigning AP Defensive Player of the Year.

Highsmith, who is entering his third season with the team, suffered a minor setback at practice this week. He left Monday’s workout with an injury to his ribs and didn’t practice on Tuesday.

Despite the recent setback, Steelers coach Mike Tomlin has liked what he’s seen so far from Highsmith through offseason workouts and two weeks of training camp practices.

“I expect grown man, varsity ball and he’s given us that thus far,” Tomlin said. “He’s highly motivated and highly conditioned. He’s excited about taking the next step.”

“I feel like every year it starts to slow down for me,” Highsmith said. “My rookie year, I know things were kind of fast, but now, just being my third year with the team, it’s slowing down a lot for me.”

Three-time All-Pro DT Cam Heyward is the heartbeat of the defense, while Watt, also a three-time All-Pro, leads by example on the field. Safety Minkah Fitzpatrick, a two-time All-Pro, patrols the back end, while returning DE Tyson Alualu and a pair of new acquisitions, LB Myles Jack and DT Larry Ogunjobi, joined to help the Steelers defense return to the top.

Highsmith wants to do his part, too.

“If we stay healthy, we all know that we can be the best in the league,” Highsmith said.

From 2017 to 2020, the Steelers defense ranked among the top six in the league, including No. 3 overall in 2020. That number dipped to No. 24 overall last season, as the Steelers were No. 9 overall versus the pass, but last against the run.

The pass rush was superb last season. Pittsburgh has led the league in sacks each of the past five seasons and Highsmith hopes he can help keep the Steelers at the top.

Playing alongside Watt, one of the best pass rushers in the league, should help Highsmith’s development. Last year, Watt led the league with 22 1/2 sacks — tied for most in a season in NFL history — despite missing two full games and parts of four others.

Highsmith said he’s continuing to learn from Watt on a daily basis.

“He’s the best in the league at what he does,” Highsmith said. “I think it helps me because a lot of guys are going to draw their attention to him. I have to be able to take advantage of those one-on-one blocks because I know I’m going to get a lot of those this year.”

Highsmith has played in 32 games, with 21 starts, in two seasons with the Steelers. He started the final five games of his rookie season after Bud Dupree tore his ACL. Dupree signed with Tennessee as a free agent in the offseason and Highsmith took over full time on the right side last season, establishing a career-high six sacks in 16 games.

Highsmith is looking for more in his third year with the Steelers.

“I do have personal goals,” Highsmith said. “Of course, I want to hit the double-digit sack mark.”

Highsmith feels he can be a difference-maker opposite Watt, providing additional punch to an already-potent pass rush. He hopes that can lead to the ultimate goal of helping the Steelers win another championship.

“I just want to do what I can to help the team win and bring another Super Bowl home,” Highsmith said.

By Teresa M. Walker 47 minutes ago
By John Marshall an hour ago
By Greg Beacham 2 hrs ago
By Tom Withers 2 hrs ago
By Rob Maaddi 3 hrs ago