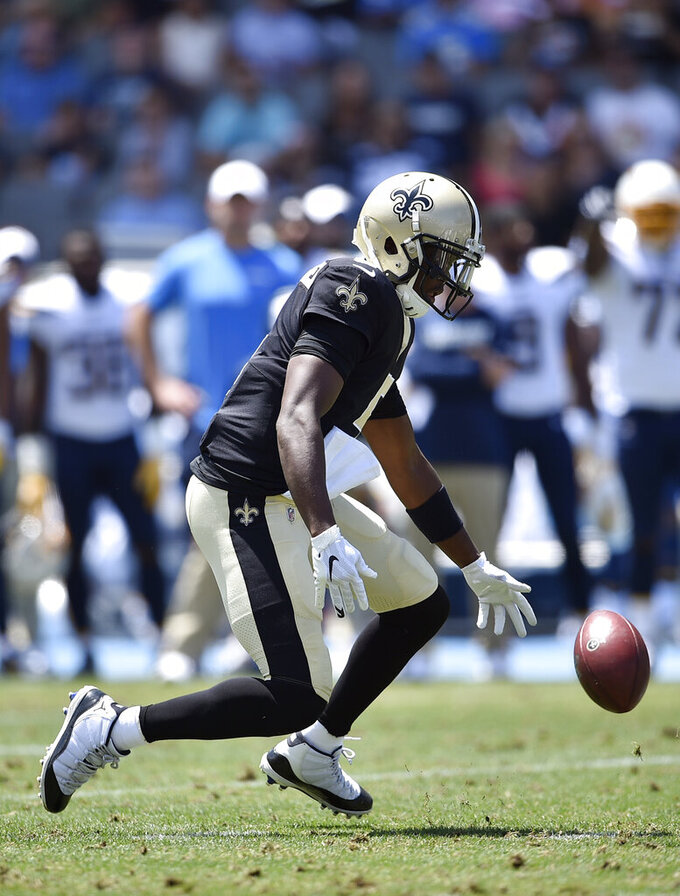 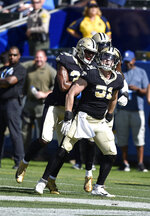 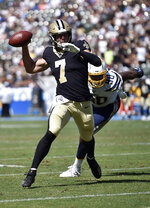 CARSON, Calif. (AP) — Taysom Hill has been the quintessential all-purpose player the past two seasons. On Sunday, he showed again what makes him such a valuable weapon for the New Orleans Saints.

Hill had 191 yards of offense and directed three second-half scoring drives to help the Saints rally for a 19-17 preseason victory over the Los Angeles Chargers.

In a game where Philip Rivers and Drew Brees were sideline observers, Hill supplied most of the quarterback highlights. He was 11 of 15 for 136 yards and a pair of touchdowns and ran for 55 yards.

With New Orleans trailing 17-3 at halftime, Hill felt the pressure was on him to produce.

"I felt like we needed some energy. And the thing I reiterated in the huddle was we're going to have a chance to win this football game," Hill said. "I know it's a preseason game, but this is what it's all about, and if we came here to not win then we're wrong. So that was the objective."

Hill then directed an 11-play, 69-yard drive midway through the fourth quarter that culminated in a 1-yard TD pass to Devine Ozigbo. The Saints went for 2, but Hill was sacked by Anthony Lanier II.

Following a Chargers punt, Hill drove the Saints into field goal range, where Will Lutz made a 28-yarder with 1:08 remaining.

"For three quarters I thought it was pretty complementary football. Then Taysom Hill took it over and they completely outplayed us," Chargers coach Anthony Lynn said.

Hill has lined up at receiver, running back and tight end for the Saints since they signed him in 2017, but coach Sean Payton has been impressed with how Hill has looked at his natural position during training camp.

"I think he's had a good camp and has progressed," Payton said. "Some of the things he did were scrambles, but he's pretty good when he's running."

The Chargers led 10-3 late in the second quarter when Pope ran back Thomas Morestead's punt with three seconds remaining. Pope — a second-year running back — made three New Orleans defenders miss within the first 15 yards before finding an opening up the left sideline and outrunning Dwayne Washington to the end zone.

"I wanted to make sure I secured the catch," Pope said. "I made the first man miss and it was straight shot from there because it was blocked so well."

Patton, who did not play in the Aug. 8 preseason opener at Arizona due to injury, gave the Chargers a 7-3 lead with 5:32 remaining when he hauled in a 26-yard pass from Cardale Jones to complete a 10--play, 98-yard drive.

Tyrod Taylor and Bridgewater were the starting quarterbacks but were not effective.

Taylor directed the first four Chargers drives and was 7 of 10 for 57 yards and an interception. Los Angeles turned it over on downs on its first series where they had to attempts to get a yard and could not convert.

Bridgewater played the entire first half — going 5 for 12 for 40 yards — despite being ill since Friday. The sixth-year quarterback did direct a first-quarter scoring drive that ended in a Lutz 33-yard field goal after A.J. Klein picked off Taylor and returned it 20 yards to the Chargers' 18.

"Man, it was a poor game," Bridgewater said. "Today I just didn't give those guys the energy they deserve."

Austin Ekeler and Justin Jackson, who have been getting most of the snaps at running back while Melvin Gordon holds out, struggled.

Ekeler was held to nine yards on three carries while Jackson had eight rushes for 33 yards. Both backs didn't have many clean rushing lanes as the Saints' defensive line had the advantage over the Chargers' offensive line.

New Orleans moved the ball well at times but had two critical turnovers in the red zone. Washington had a ball bounce off his hands and into the arms of safety Jaylen Watkins at the Chargers' 2-yard line for an interception during the second quarter. Los Angeles would take advantage and drive for a touchdown.

During the fourth quarter, linebacker Denzel Perryman forced Ozigbo to fumble and it was recovered by Adarius Pickett at the LA 9.

"Make no mistake about it there are some things that just eat at you a little bit, (things) we can't do as a team and expect to win against good teams," Payton said. "Those are the things we have got to get correct."

Chargers first-round pick Jerry Tillery played in his first game and recorded a sack during the second quarter. The defensive tackle, the 28th overall selection in April's draft, got past two offensive linemen to bring down Bridgewater.

"It felt good to get out there again. My last game (for Notre Dame) was against Clemson in December, so it has been awhile. I was able to get back to it pretty well," Tillery said.

Saints: Visit the New York Jets next Saturday as Brees is likely to get his only snaps of the preseason.