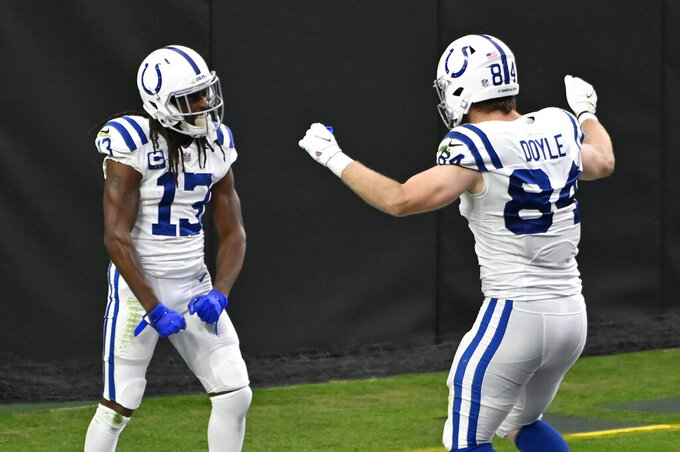 LAS VEGAS (AP) — Frank Reich found himself regularly amazed while he watched everything his Indianapolis Colts accomplished in their first trip to Sin City.

At the final whistle on a 44-27 victory Sunday, Reich was still extremely impressed with his team and its potential.

“I believed that we can be that good, but obviously this was a big day,” Reich said.

Indianapolis racked up 456 total yards, including a whopping 212 on the ground, in its highest-scoring performance in its three seasons under Reich, and its biggest since 2014 overall. Their offensive superlatives prompted the Raiders to fire defensive coordinator Paul Guenther less than three hours after the final whistle.

While the Colts (9-4) haven't clinched their second playoff berth in Reich's three seasons, they appear to be in elite form as they head down the postseason stretch.

T.Y. Hilton caught two touchdown passes from Philip Rivers, while Taylor rushed for a career-best 150 yards and two scores. Rivers passed for 244 yards as the Colts scored on seven of their first eight drives in their fourth victory in five games.

“You hope you’re playing your best ball here in the fourth quarter (of the season), and that’s what we’re going to have to do to give ourselves a chance in the playoffs here,” Rivers said. “We’re built to be efficient and dink-and-dunk it and grind out the 4-yard runs, but there’s no question what big plays do for you. It’s huge.”

Safety Khari Willis clinched the win with a 53-yard interception return for his first career touchdown with 5:22 to play. Indianapolis stayed securely in one of the conference's wild-card spots and remained atop the AFC South alongside Tennessee, which has a better divisional record for now.

Derek Carr passed for 316 yards with two touchdowns and two interceptions for the Raiders (7-6), who have lost three of four after a strong start to their relocation season.

Foster Moreau and Nelson Agholor made TD catches in the first half, but the offense couldn't keep up while Indianapolis marched up and down the field to little resistance. Coach Jon Gruden addressed the defense's woes by firing Guenther, who had been Gruden's defensive coordinator since he took over the franchise in Oakland in 2018, even though the Raiders have another game Thursday.

“When you need a win against a team you’re battling with for a playoff spot and you don’t get it, it really rips your heart out,” Carr said.

Rivers, the longtime Chargers quarterback, made his 29th career start against the Raiders and beat them for the 19th time, both the most by any opponent in Raiders history.

Rivers isn't the only quarterback picking apart this Raiders defense down the stretch, however: Las Vegas has given up 150 points in its last four games, with the embattled Guenther's unit yielding an average of 399 yards per game in that stretch.

Only a last-second comeback against the winless Jets has prevented Las Vegas from going 0-4 since its 6-3 start to the season.

“We were in a situation where we had to score a touchdown every time we had the ball, it seemed,” Gruden said. “You get to the point where you second-guess everything you’re doing offensively every time you punt. It’s tough right now, but you have to stay confident that your players are going to put it together."

Both offenses started superbly at new Allegiant Stadium, where the Raiders are 2-4.

Hilton's 41-yard TD catch put Indianapolis back in front moments later. A touchdown-saving tackle by Vegas' Trayvon Mullen with 1 second left in the first half limited the Colts' halftime lead to 20-14.

Taylor surpassed 1,000 yards from scrimmage in his rookie season in the third quarter on his long touchdown run.

“Getting a bit of fresh air was definitely fulfilling,” Taylor said with a laugh.

Willis scored the Colts' fourth defensive touchdown of the season with his interception return.

Moore blew both teams' minds with his interception in the second quarter. The fifth-year defensive back said he was “just doing what I was supposed to do,” but everybody else marveled at his hands and body control.

“I didn’t know if Odell Beckham Jr. was playing defense for us there,” Reich said. “I had to stop for a second there and kind of think, ‘Did he actually catch that ball?’ It was really just one of those once-in-a-lifetime chances, a really great play.”

Raiders: DE Clelin Ferrell was ruled out after halftime with a shoulder injury.