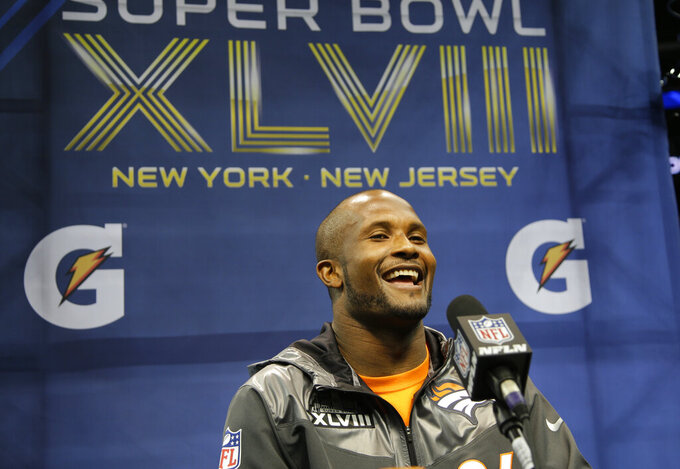 DENVER (AP) — From the moment he played his first pickup game on a steamy summer day in the three-stoplight town of Folkston, Georgia, Champ Bailey had a nose for the football.

"I mean, he was greedy with the football," said Boss Bailey, his younger brother by 16 months who played with Champ in high school, college and the pros. "He wanted the ball in his hands. He never said, 'Nah, give it to somebody else."

Those ball-hawking skills served Bailey well when he converted from a star running back and quarterback in high school to a superstar cornerback in college and the pros, where he was downright gluttonous with the football during a 15-year NFL career in Washington and Denver that landed him in the 2019 class of the Pro Football Hall of Fame.

Bailey picked off 54 passes altogether, including one against New England that he returned for 100 yards in the divisional playoffs after the 2005 season.

"That moment was so big because of what the Patriots had done and the kind of run they had going on," Bailey recounted.

Tom Brady had already won three of his six Super Bowl rings and all 10 of his playoff starts when he drove the Patriots to the Broncos 5-yard line late in the third quarter on that icy Denver night.

The momentum, if not the lead, was slipping from Denver's grasp when coach Mike Shanahan called for a safety blitz from Nick Ferguson, who collected just one sack in his decade-long career.

"The Broncos never blitzed me, so it probably surprised the hell out of Tom Brady and the offensive linemen," Ferguson said. "And truth be told, we ran the same blitz twice. The first time, I didn't go. So, the second time I lined up on that particular play, the linemen even said, '25 isn't coming.' And I was just like, 'Holy smokes, they're not going to block me!'"

Ferguson shot through the line untouched and "Brady saw me at the last second and he started to roll to his right side and he wasn't able to set his feet," Ferguson said. "So, he just threw it toward Troy Brown and luckily enough, Champ broke on the ball and we're off to the races."

Scurrying down the Denver sideline after Bailey were teammates John Lynch, Gerard Warren and Ferguson, who slowed down and stepped in front of Brown to shield Bailey about 25 yards from the end zone.

That blur was tight end Benjamin Watson, who had raced from the far side of the field, or, as Ferguson said, "from out of nowhere," to knock Bailey out at the New England 1.

"It took a fellow Georgia Bulldog to catch me," Bailey cracked after the longest non-scoring interception in NFL playoff history, one that helped saddle Brady with his first playoff loss.

In the AFC championship a week later, Bailey had another interception in his grasp and both the end zone and a trip to the Super Bowl in his sights only to watch Steelers receiver Hines Ward somehow come down with the ball instead.

Pittsburgh went on to beat Denver 34-17, denying Bailey a chance to play in the Super Bowl in his prime.

"It denied all of us," Ferguson said. "I still have trouble coming to grips with that years later because you only get a few opportunities and you may get one. Unlike myself and John, Champ fortunately got another opportunity and he actually went to the Super Bowl. But it would have been great if we could have won that game because we knew for sure Seattle wouldn't have beaten us. The NFC didn't have any really good teams that year."

Nearly a decade later, Bailey again bested Brady in Denver, this time in the AFC championship, to reach Super Bowl 48 against Seattle. Only, these Seahawks were indestructible as the "Legion of Boom" crushed Peyton Manning's record-setting offense and put a 43-8 shellacking on the banged-up Broncos in the final game of Bailey's storied career.

"I've settled with the fact I didn't get it," said Bailey, whose dozen Pro Bowl berths are an NFL record for defensive backs. "I did have a shot, though."

Looking back, Denver's drubbing at the hands of the Seahawks was no surprise, Bailey said. While the Broncos' offense piled up points by the bunches, becoming the first NFL team to top 600 in a season, Denver's defense was hit hard by injuries, including a nagging foot injury that limited Bailey to just three starts — and only one full game — that season.

"I mean, you can't go in there half-stepping on defense and expect to win," Bailey said, although that's exactly what he expected that evening.

Ferguson said every year when the playoffs roll around, he is haunted by the Broncos' loss to Pittsburgh in 2006.

"I wish I could go back and change it, but I can't," he said. "That's why I was so glad to see Champ finally play in a Super Bowl. I was so happy for him because of all the accolades that he had, Pro Bowls, All-Pro, that was the one thing that was missing from his career. You want him to win, but ... ."

Said Bailey, "At least I got there."

Two years later, Bailey proudly watched Denver's defense destroy the Carolina Panthers in Super Bowl 50 behind Von Miller's MVP heroics and the "No Fly-Zone" secondary, which had Bailey's fingerprints all over it thanks to its anchor, Chris Harris.

Bailey had tutored a young Harris the same way Hall of Fame cornerbacks Darrell Green and Deion Sanders had guided him when he arrived in Washington as the seventh overall pick in the 1999 NFL draft.

"I think I would have been great without Deion and Darrell," Bailey said. "Would I have been Hall of Fame good? I don't know. But they actually get a lot of credit for getting me there because I don't know if I would have been as great as I was if I didn't have those nuggets that they gave me early in my career."

Shanahan sent star running back Clinton Portis to Washington in a blockbuster trade for Bailey in 2004, acquiring a quiet leader in the mold of Jerry Rice and John Elway.

"One of the reasons he was such a great leader was that he practiced full-speed," Shanahan said. "Champ set a standard for the rest of the football team that was very high."

While his work ethic charmed his teammates, it was Bailey's versatility that befuddled opponents, especially in 2005-06 when he collected 19 of his interceptions, including the 100-yard Brady back-breaker.

Manning said Bailey had "as good of hands as any top-flight receiver in the NFL," which is something his little brother knew all along.