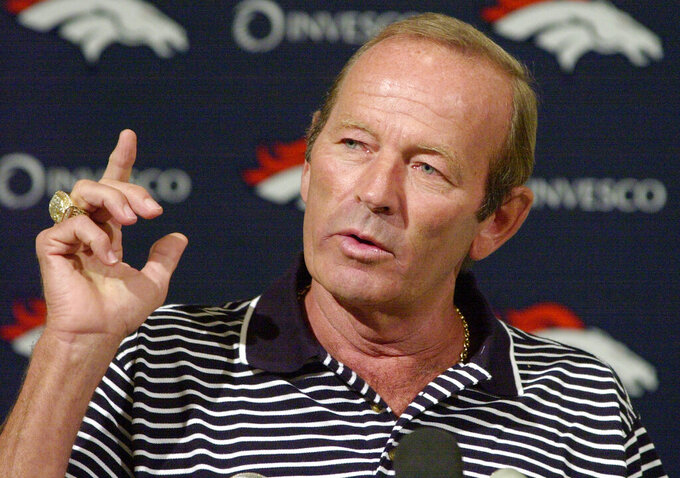 FILE - In this Aug. 20, 2002, file photo, Denver Broncos owner Pat Bowlen gestures during a news conference at the team's headquarters in Denver. The late Pat Bowlen will be inducted into the Pro Football Hall of Fame in Canton, Ohio on Aug. 3, 2019. (AP Photo/Ed Andrieski, File)

DENVER (AP) — John Elway is glad he had the chance to return the favor and dedicate a championship to his beloved boss 18 years after Pat Bowlen jabbed the Super Bowl 32 trophy into the San Diego night and hollered, "This ... one's ... for ... John!"

Elway called it the greatest moment of his career, and when Denver beat Carolina in Super Bowl 50, the Broncos QB-turned-GM couldn't wait to hoist the Lombardi Trophy and howl, "This ... one's ... for ... Pat!"

Bowlen, who died in June at age 75 , will be posthumously inducted into the Pro Football Hall of Fame this weekend, honored for helping the NFL usher in billion-dollar television deals and for turning the Broncos into a model franchise with as many Super Bowl appearances (seven) as losing seasons since buying the team in 1984.

"I can remember the hug with him in the locker room" after that first championship, which followed three Super Bowl blowouts, said Elway, who helicoptered his way into history in leading Denver past Green Bay 31-24.

A year later, Bowlen dedicated Denver's 34-19 win over Atlanta in Super Bowl 33 to the fans.

By the time the Broncos won their third title, Bowlen was homebound, forced by Alzheimer's to step down from his daily duties running the franchise. Team president, CEO and confidante Joe Ellis took the trophy to Bowlen's house when the team flew back to Colorado.

Three years later, Ellis and Steve Atwater, one of Bowlen's favorite players, informed Bowlen he was a Hall of Fame contributor nominee.

"I strongly believe that he knew that he got into the Hall of Fame," said Brittany Bowlen, the owner's 29-year-old daughter who aims to one day assume controlling ownership. "He had a really big smile when he found out. And I find that a real blessing to know that he knew."

Presenting Bowlen, the first of the Hall's 326 members to die in the roughly six months between election and induction, is longtime head trainer Steve "Greek" Antonopulos, the only fulltime employee who worked for the Broncos during Bowlen's entire tenure as owner.

Bowlen always began his day stopping by the trainer's room for updates.

"Nobody cared more about players than Mr. Bowlen," Antonopulos said. "He liked to communicate with them, not because he wanted to rub elbows, but because he cared about them."

Hall of Famer Gary Zimmerman realized Bowlen wasn't your typical team owner his first Thanksgiving in Denver when he found a sign-up sheet for a turkey, surely a prank on the rookies and other newcomers like himself. What the heck, he figured he'd play along, so he scribbled his name.

"Then I come into the locker room," Zimmerman recounted, "and there's Pat sticking turkeys into our lockers."

A billionaire businessman whose family made its fortune in oil, gas and real estate, Bowlen just wanted to be one of the guys. A competitive triathlete, Bowlen often was found on the StairMaster in the weight room, drenched in sweat when he wasn't on the sideline checking out practice.

If Bowlen's competitiveness set the standard, his style set the tone.

Remember him on the sideline, arms crossed, sporting sunglasses, a mink coat and that stoic look? His team embraced that image.

"As players we thought, 'This dude is a cool dude as our owner,'" Elway said. "We all thought we were kind of hip because of Pat."

Bowlen served on more than a dozen NFL committees, including the competition and broadcast groups that played key roles in the game's soaring popularity.

"He wanted to do the best thing for the league and he didn't want any credit for it," former Broncos coach Mike Shanahan said. "He didn't take a whole lot of accolades, but he did a whole lot of work. And I think that was Pat in general."

Cowboys owner Jerry Jones said in Bowlen he found a kindred spirit, one who recruited him in selecting dark horse candidate Paul Tagliabue as commissioner in 1989, and in bringing Rupert Murdoch and Fox aboard as a broadcast partner in 1993.

Patriots owner Robert Kraft said, "There was no owner or person like Pat Bowlen. I loved him. ... He was relentless in his competitive desire to win, but he was always a gentleman, a professional and a trusted partner. He was a leader both in his success and in his kindness and humility."

"He had the style for it, he had the charisma for it," Bailey said. "It's just, what does that really bring to the team? Nothing, really. I loved that about him."

"A huge reason I came to Denver was I knew Mr. Bowlen was all about winning," Peyton Manning said.

Outside the team's locker room is a large image of Bowlen and his signature saying, "I want us to be number one in everything."

"He ran this football team with his heart and not his pocketbook," Elway said, a sentiment to which Ellis can attest. "He wanted to rip up everybody's contract all the time to give them more money."

Ellis said Bowlen's competitive streak was especially evident on game day when "Pat had those binoculars to his eyes with fire burning through them until the gun sounded."

He remembered a 41-14 win at Oakland. Late in the game, Ellis told Bowlen he could go ahead and relax.

"Let me tell you how many games I've enjoyed over the years," Bowlen interrupted. "I've got this anxiety level and until the gun sounds, it's never over. But I can count on one hand how many games I actually recall that I can fully enjoy."

A sly smile came next.

"Tonight's one of them."

Bowlen split his offseasons between Denver and Hawaii, and every year he'd take his players out canoeing, golfing and dining at one of his restaurants during Pro Bowl week. Those are the only times Elway ever saw Bowlen show off.

"He was proud of his restaurants," Elway said. "But you know what? He'd walk in that restaurant and he was more proud of the guys he was walking in with. Not too many times did we have a private room. We sat out in the public and he enjoyed that."