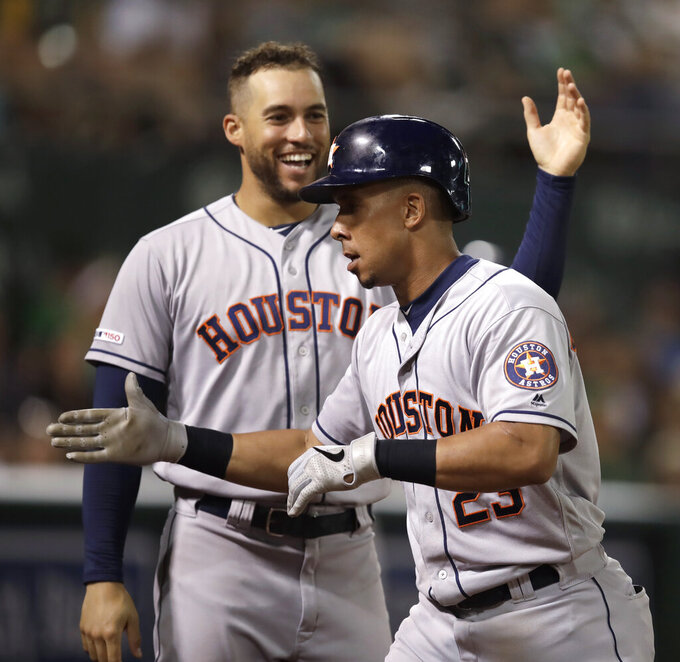 Houston Astros' Michael Brantley, right, is congratulated by George Springer after hitting a home run against the Oakland Athletics during the sixth inning of a baseball game Thursday, Aug. 15, 2019, in Oakland, Calif. (AP Photo/Ben Margot) 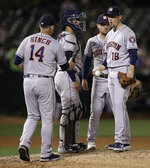 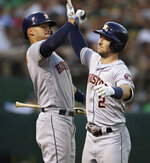 It sure felt like it the way balls were flying out.

Matt Chapman hit two home runs for the second straight day, connecting for the tiebreaking shot in the eighth inning to lead theAthletics past the Houston Astros in a 7-6 home run derby of sorts Thursday night.

The teams combined for a Coliseum record 10 home runs, five by each team. Four players hit two home runs: Chapman and teammate Matt Olson along with Houston's Michael Brantley and Carlos Correa. Since 1908, it marked the fifth time in major league history four players hit at least two home runs, with Minnesota and Baltimore also doing so on April 20 this year.

The 10 homers topped the previous record of eight combined for the run-down venue also home to the NFL's Oakland Raiders. The A's and Astros were the last to total eight together, on Aug. 19, 2018.

With the game tied at 6, Chapman led off the eighth with a homer off Chris Devenski (2-2). Chapman recorded his fourth career two-homer game a day after hitting two against Giants. Liam Hendriks kept the Astros from clearing the fences in the ninth for his 14th save.

"They hit the most important one at the right time," Astros manager A.J. Hinch said. "We hit some big ones. It was a little bit of 2019 home run derby with the ball flying out of the ballpark everywhere."

Olson hit a three-run homer and solo shot. Correa homered leading off the fifth and seventh innings for Houston, the second giving him 100 for his career. Brantley hit solo drives in the sixth and eighth innings, tying the game with the second.

Olson notched his sixth career multihomer game and second this year on an uncharacteristically hot night when each starting pitcher surrendered four home runs. Chapman hit a tiebreaking homer estimated at 453 feet leading off the sixth before Olson's second of the night and No. 25 of the season.

Alex Bregman hit a two-run homer in the top of the fourth to put Houston ahead only for Olson to answer in the bottom half. Joseph hit the first pitch from Aaron Sanchez for his first home run three batters later.

Fiers started the game with a walk to George Springer then retired the next 10 Astros batters in order before Brantley's two-out single in the fourth for the first Houston hit then Bregman followed with his 29th homer.

Brantley homered to tie the game in the sixth before the slugging Matts did their thing for the A's.

Fiers allowed six hits and five earned runs pitching into the seventh, matching his career high surrendering four homers. He has won nine straight decisions and is unbeaten over 18 starts since pitching his no-hitter against the Reds on May 7. The right-hander has no-decisions in each of his four starts against his former Astros club this season.

"Guys were swinging," he said. "There were no cheap homers."

Sanchez worked 5 1/3 innings in his third start since joining the Astros from Toronto at the trade deadline. He gave up six runs on seven hits.

Jake Diekman (1-6) recorded the last out of the eighth for his first victory with Oakland.

A's first base coach Al Pedrique was instrumental as an Astros special assistant in 2007 when he helped convince the Houston front office to sign Venezuelan countryman Jose Altuve at age 16.

All these years later, they sat in the Astros dugout before the series opener catching up and sharing some laughs and smiles.

Athletics: Mark Canha, who was filling in at CF with Ramon Laureano hurt, hit his left hand on the wall Wednesday at San Francisco and missed Thursday. Melvin hoped he would be back in the lineup Friday night if the soreness had subsided. Chad Pinder started in center. ... LHP Sean Manaea will pitch again Sunday for Triple-A Las Vegas as he nears closer to returning for the first time since having shoulder surgery last September. Manaea, who also experienced some soreness in his right side during a June simulated game, struck out 10 over 5 2/3 innings for the victory with Las Vegas at Omaha on Tuesday. ... RHP Marco Estrada, on the 60-day injured list with a lower back strain, is set to work four innings and about 65 pitches Friday for Las Vegas in his rehab. ... LHP prospect Jesus Luzardo, back after being sidelined by a strained pitching shoulder, allowed six hits and five runs — four earned — in 3 1/3 innings for Las Vegas on Thursday night.

RHP Justin Verlander (15-4, 2.82 ERA) pitches for the Astros looking to win his sixth straight decision over seven starts while the A's counter with RHP Tanner Roark (7-8, 4.06) in his third start since being acquired from Cincinnati at the trade deadline.