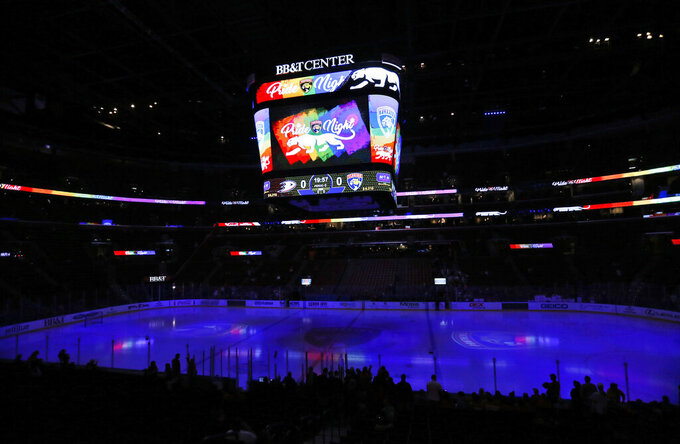 In this Feb. 3, 2017, photo, the scoreboard shows "Pride Night," before the start of an NHL hockey game between the Florida Panthers and the Anaheim Ducks in Sunrise, Fla. Researchers say a survey of players in the Australian Ice Hockey League shows homophobic language is often used but that an even higher percentage of competitors would make a gay player feel welcome. (AP Photo/Wilfredo Lee)

Researchers say a survey of players in the Australian Ice Hockey League shows homophobic language is often used but that an even higher percentage of competitors would make a gay player feel welcome.

It's an apparent contradiction the researchers call a "disconnect between perception and reality" because anti-gay comments can often be a cultural norm.

The study, conducted by the Behavioral Sciences department at Monash University in Melbourne and released Thursday, surveyed 146 players from 11 countries who play in the semi-professional league, including 56% from Australia, 25% from the U.S. and Canada, and about 12% from Europe.

More than 98% of the league's players completed the survey that examined why homophobic behavior is common and whether education and approaches like the Pride Games in professional sports league are helping. The NHL has sponsored "Hockey Is for Everyone" events at games throughout the league, and all 31 teams now host Pride Nights.

Lead Monash researcher Erik Denison said the university's study identified "a disconnect between perception and reality, with players perceiving their team would be welcoming to a gay person -- 86% -- despite harmful and exclusionary language being used regularly (60."

"We also wanted to research hockey because it remains the only major pro sport that's never had a gay athlete come out either while as a player, or even after retirement," Denison told The Associated Press.

"This seemed odd to us because the NHL has been quite proactive. Unfortunately, and perhaps tellingly, not a single player in the anonymous surveys we conducted with hockey players identified as gay or bisexual."

The Monash study found that homophobic and sexist language was commonly heard among the Australian hockey players, and that there was a strong connection between players using slurs and hearing teammates and coaches use them.

"Language appears to be cultural and normative," the study said, adding that nearly 55% sometimes used homophobic language with the intention to "make people laugh."

Dre Barone was a referee in the ECHL, two levels below the NHL, and came out as gay several years ago. He had hoped to move up to the American Hockey League, and possibly the NHL, but said he's all but given up on his officiating career.

"I just finished my fourth and last season in the ECHL, by choice,"Barone said in an email to the AP. "The AHL has ignored me and passed over me time and time again with no valid reason. At this point everyone just assumes it's not because I'm gay, but (because I'm) so public about it and do stories like these. So my officiating career is unclear right now."

Barone has been vocal about the homophobic language he has heard on and off the ice.

"Whether in Canada, the U.S., Europe, or Australia, the macho culture and homophobic slurs persist," he said in his email. "The most interesting findings are that roughly four out of five players admit to have either used or heard homophobic slurs within the past two weeks, while also believing that a gay player would be accepted if they came out to their team."

Kade Matthews, who has organized an LGBT hockey team that competes in a Melbourne recreational league, feels the same way.

"I started it (the team) due to my own experiences with hockey," Matthews said in an email to the AP. "I started playing hockey while going through a lot of mental health issues, including coming out."

Matthews also refers to that disparity between what people think and what they say.

"Initially, the report was surprising in terms of the number of people who admitted to using the homophobic and sexist language," Matthews said. "The more I thought about my own experiences and spoke to others on our team, I realized that perhaps I've become accustomed to this language and the findings were in line with what we have experienced.

"There is a massive disconnect between what people who play hockey think is a welcoming environment for LGBT people, versus the reality that we experience in terms of the language we hear and the culture."