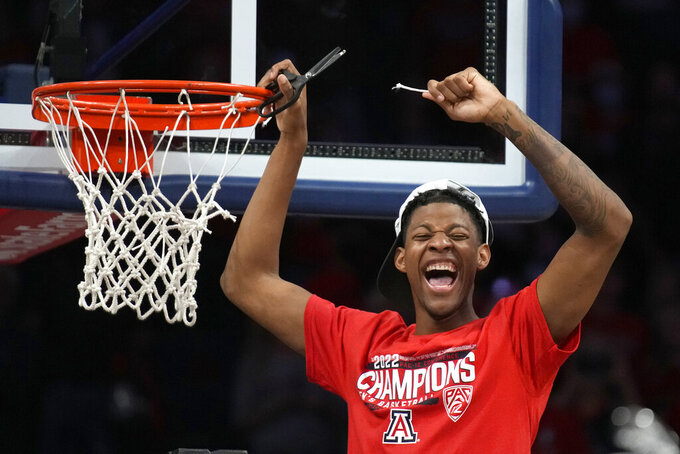 Wagering on all those parlays and long shots on the betting app — fun.

Filling out a bracket and waiting for the upsets to begin — that's why they call this March Madness.

Legal sports gambling across wide swaths of the United States might have made the next three weeks' worth of NCAA Tournament games easier to bet on individually, but it didn't change one simple truth:

There's nothing quite like the magic of picking winners of all 60-something games, figuring out the Final Four and national champions, then pacing nervously through every buzzer beater, every agonizing upset, every bad call and every shot that should've gone in but didn't. All have the potential to make a casual fan feel like an armchair genius. Any misstep can wreck the whole thing for even the most seasoned of hoops junkies.

“It holds a special place because you never really have someone come up to you at the end of the NFL season and say ‘Who’s in your bracket for the wild-card game?'" said Dennis Deninger, the Syracuse professor whose latest version of the book “Live Sports Media” dropped this month. "But the NCAA Tournament, it's just a totally different thing.”

The American Gaming Association, the gambling industry’s national trade group, estimates 45 million Americans will wager some $3.1 billion on the tournament (a very conservative estimate), and around 36.5 million will bet something on a bracket or office pool.

The average bet per bracket will be somewhere around $30. And while, sure, those entry fees can net hundreds or sometimes thousands, they can also parlay themselves into something priceless — namely, the chance to show everyone in your office, your poker group or your golf game that you, in fact, know college basketball better than anyone. Or cheer for better mascots. Or always knew that your love of a certain team's color would pay off big one day.

It is not about being perfect (the odds of that are 1 in 9.2 quintillion — that's a 9 with 18 zeros after it). It is, instead, a series of choices that can lead to something even better — namely, bragging rights and a(nother) way to show you're smarter than everyone else.

“In many ways, it's a social lubricant,” said University of Illinois researcher Sheldon Jacobson.

Jacobson has spent the past decade trying to build the better mousetrap to predict brackets. Last year, he boiled it down to three models. His computers produced 1 million brackets using each. Two of the models produced combinations that would've won the ESPN pool contest that included around 17 million entries.

Please, Jacobson warns, do not try this at home. He also reminds us that his goal has never been to pick individual games. It can, however, drastically improve the odds of assembling an above-average bracket. His models only look at seed numbers and how they've performed historically. The fact that the name “Auburn,” or “Duke” or “South Dakota State” might be beside the seeding this year means nothing to him or his computers.

“When you're talking about hardcore gamblers, you're talking about a much different animal,” Jacobson said. “But I think we're still preserving the office pool for the vast majority of people because it's fun, it's interesting and it gives people a chance to communicate and bond.”

Because of the recent onslaught of legalized gambling — with wagering available at the touch of a cellphone — the number of brackets being filled out is actually expected to decline this year while the number of Vegas-style wagers on individual games and combinations is expected to go up.

More than 30 states offer some sort of legalized sports betting and, as a whole, March Madness will bring in more money than the Super Bowl, which is a one-day event.

The bracket as the ideal fan-engagement tool began around 1985, when the NCAA expanded the tournament to 64 teams, allowing for four perfectly symmetrical regions, each with 15 games on the road to the Final Four.

The stakes have been known to move beyond mere fun and games. Football coach Rick Neuheisel famously got fired from his job at Washington for participating in a basketball pool, in violation of school rules.

Even with gambling infiltrating sports leagues in ways once thought unimaginable — see all that surrounds the NFL and its recent suspension of wide receiver Calvin Ridley — the NCAA has held to its long-draconian stance against wagering on intercollegiate athletics. It is, as the heavily wagered-upon NFL can attest, an irony considering the bracket has long stood as potentially the greatest driver of sports betting in America, however small-time those wagers might be.

But this month — with the tournament returning to “normal,” after being canceled because of COVID-19 in 2020 and then relocated to a bubble in Indianapolis in 2021 — does not feel like the time to talk about things that are wrong about March Madness.

Instead, it's a time to imagine all the possibilities. How better to do that than by filling out a bracket?

“It's one of those pride things," Deninger said. “It creates conversation, and it creates socialization, and after what we've been through the last year-and-a-half, it might be just what we need.”