Hooper calls chance with Titans a no-brainer for tight end 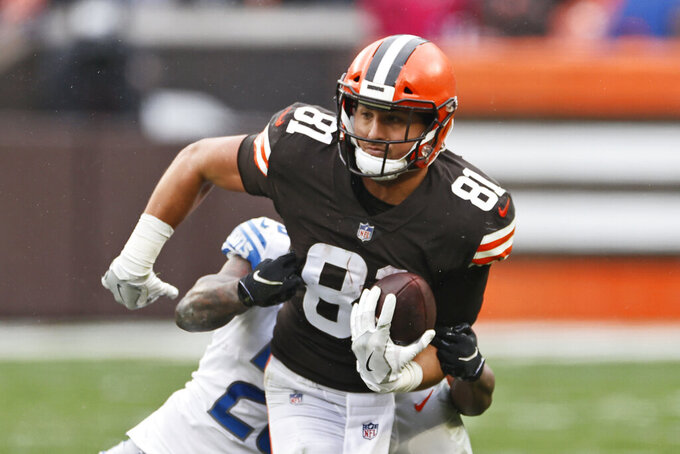 FILE - Cleveland Browns tight end Austin Hooper (81) tries to break a tackle by Detroit Lions safety Will Harris (25) during the first half of an NFL football game, Sunday, Nov. 21, 2021, in Cleveland. Cleveland plans to release tight end Austin Hooper, said a person who spoke on condition of anonymity because teams can’t make free agency signings or other moves until the new NFL league year begins at 4 p.m.(AP Photo/Ron Schwane, File)

Tennessee's newest tight end Austin Hooper says he only wants a chance to compete with his third NFL team.

The Titans introduced Hooper on Monday, a quick turnaround from Cleveland releasing him Thursday. Hooper agreed to terms Friday after getting a scouting report on the Titans from his college teammate and now Titans quarterback Kevin Hogan.

The Titans also announced their one-year deals with defensive back and special teamer A.J. Moore.

Hooper was a Pro Bowl tight end in his final two seasons with Atlanta after being drafted in the third round at No. 81 overall out of Stanford. He caught 71 passes for 660 yards and four touchdowns in 2018 and 75 for 787 and six TDs in 2019.

The Browns signed him to a four-year, $42 million deal in 2020, and his production has dropped in each of the past two seasons. He wound up with 84 receptions for 780 yards with seven TDs in 29 games for Cleveland. He was used predominantly for blocking in the run game and split time with other tight ends.

“There's definitely some frustration there,” Hooper said. “I've been wondering why they gave me the deal and wasn't really involved that much. At the end of the day, I've always been the type of player to accept the role I've been asked to do."

The 6-foot-4, 255-pound Hooper says he's a versatile player who can line up in multiple spots and do whatever is asked of him. The Titans need him to be the No. 1 tight end they lacked in 2021 after Jonnu Smith signed as a free agent with New England.

The Titans already brought back veteran tight end Geoff Swaim, who's more the much-needed blocker in the run game for Derrick Henry.

Hooper certainly is aware of the Titans' history using tight ends, most recently with Delanie Walker's success. He said he watched this team from afar. Hogan's inside information about details like scheduling, the locker room and playing for coach Mike Vrabel helped convince him to agree to a one-year deal with Tennessee.

“I'm going to try to be the best version of myself and go out and compete,” Hooper said.

Now that Hooper will be moving to Nashville, taking part in the Tight End University put on by San Francisco tight end George Kittle in Music City now is on his itinerary.

“I should probably talk to George before I say it on camera,” Hooper said. “'George, I'll probably be coming over soon.”

Hooper was the first big free agent the Titans have signed after keeping outside linebacker Harold Landry and center Ben Jones off the free agent market with deals last week.