Hot weather something different for both Super Bowl teams 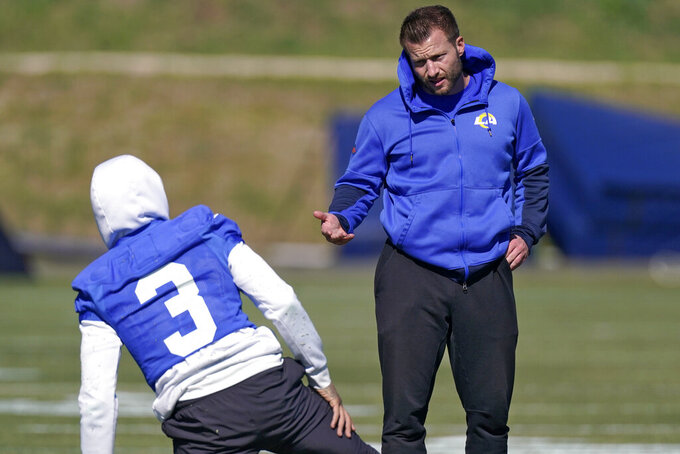 That's the temperature the Cincinnati Bengals practiced in Wednesday, trading an ice storm and frigid conditions back home for clear skies in Los Angeles. The team held its first of three Super Bowl practices at Drake Stadium on the campus of UCLA.

After a 35-minute walkthrough, then lunch, the Bengals held a non-padded workout. Tight end C.J. Uzomah, recovering from a knee injury sustained in the first half of the AFC championship win in Kansas City, participated in the team stretching, then headed to the far end of the field to work with an athletic trainer. He was listed as a non-participant.

Taylor said after the workout that Uzomah looks “positive” and is expected to do more Thursday.

“Considering where he was when he fell on the turf last Sunday to where he is now, (I’m) really optimistic about how it’s going,” Taylor said. “We’ll continue to see him in action these next two days, but optimistic.”

Guard Jackson Carman was limited because of a back injury. Taylor said the team is “still kind of protecting him” but he’s hopeful Carman will participate more Thursday.

“This is like our stadium,” Taylor said of the new venue. “We walk right out of our meeting rooms and we’re at the practice field, so that part has been really good and helps us keep our schedule as a normal routine.”

In Thousand Oaks, the Rams installed the final elements of their game plan during an extended walk-through practice at their headquarters on the campus of California Lutheran University.

“Today kind of represented the finality of it,” coach Sean McVay said after the session, which lasted 1 hour, 40 minutes. “We can tweak and adjust as we go, but they did a good job of getting ahead of stuff. Guys felt really good. We ran through all the different situations that can come up … and then the next couple of days we’ll just be tightening up.”

The Rams also aren't accustomed to such warmth, nor the wind gusts of 22 mph on Wednesday. Those winds could be stronger on Thursday, projected in the 30 mph range. That forecast prompted McVay to move Thursday’s practice — the most intense session of the week — to the Rose Bowl.

McVay noted the progress of running back Darrell Henderson and right tackle Joe Noteboom. Henderson took a healthy share of snaps with the first unit during the team drills.

“I think Darrell’s going to go,” said McVay, who could have a three-pronged running game with Sony Michel, Cam Akers and Henderson.

Henderson has nursed a knee injury for more than a month.

Noteboom, rehabbing from a strained pectoral muscle, spent part of the practice working on conditioning with an athletic trainer before finishing with team drills. McVay is unsure of his status for Sunday.