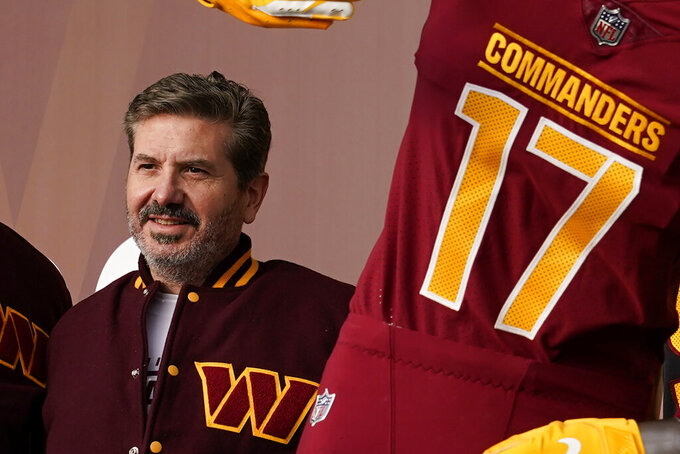 FILE - Dan Snyder, co-owner and co-CEO of the Washington Commanders, poses for photos during an event to unveil the NFL football team's new identity, Wednesday, Feb. 2, 2022, in Landover, Md. A person with knowledge of the situation tells The Associated Press the Washington Commanders have bought land in Virginia for what could be a potential site of the NFL team’s next stadium. The 200 acres of land purchased for approximately $100 million is in Woodbridge roughly 25 miles outside the District of Columbia. The Commanders’ lease at FedEx Field in Landover, Maryland, expires in 2027. (AP Photo/Patrick Semansky, File)

ASHBURN, Va. (AP) — The U.S. House Committee on Oversight and Reform has invited NFL Commissioner Roger Goodell and Washington Commanders owner Dan Snyder to appear at a hearing later this month as part of the Congressional investigation into the team’s workplace conduct.

Chairwoman Carolyn B. Maloney and Subcommittee on Economic and Consumer Policy Chairman Raja Krishnamoorthi said Wednesday they sent letters to the league and team requesting the presence of Goodell and Snyder on June 22.

It was not immediately clear if the committee expected either to make an appearance. NFL spokesman Brian McCarthy said the league had received the invitation “and will respond directly in a timely manner.”

McCarthy added, “The NFL has cooperated extensively throughout the Committee’s lengthy investigation of the Washington Commanders, including by producing more than 460,000 pages of documents and responding to numerous questions in writing and in conversations with the committee’s staff.”

Through a spokeswoman, the Commanders said they have assisted the NFL in cooperating with all prior requests from the committee and, using similar language as the league, added, that they look forward to responding to the invitation "in a timely manner."

Congress launched an investigation into the organization’s workplace culture in October after the league declined to release a report last year about an independent review it oversaw, which led to a $10 million fine. The committee described the upcoming hearing as the next step in the investigation and said it will examine how the NFL handles allegations of workplace misconduct and how it sets and enforces standards for all teams.

“We must have transparency and accountability, which is why we are calling on Mr. Goodell and Mr. Snyder to answer the questions they have dodged for the last seven months,” Maloney, a Democrat from New York, said in a statement. “The hearing will explore how Congress can act to prevent employers from silencing victims of workplace misconduct and ensure that what happened at the Commanders organization does not happen again.”

Krishnamoorthi, an Illinois Democrat, said the committee has been stonewalled for seven months by nondisclosure agreements for former employees and other tools “to evade accountability."

Snyder in the summer of 2020 hired attorney Beth Wilkinson to investigate allegations of workplace misconduct after several former employees made assertions about the work environment. The league took over control of that investigation, which concluded last summer.

Congress has urged Goodell to release a written report of the investigation. The league has said repeatedly it has no plans to do so.

Lawyers Lisa Banks and Debra Katz, who represent more than 40 former team employees, said in a statement Wednesday they were pleased to see the committee invite Goodell and Snyder to appear.

“We hope they will demonstrate the same courage as our clients and agree to testify,” they said. “Dan Snyder and Roger Goodell have a lot to answer for.”

When asked about the situation after the latest Commanders offseason workout, coach Ron Rivera declined comment.