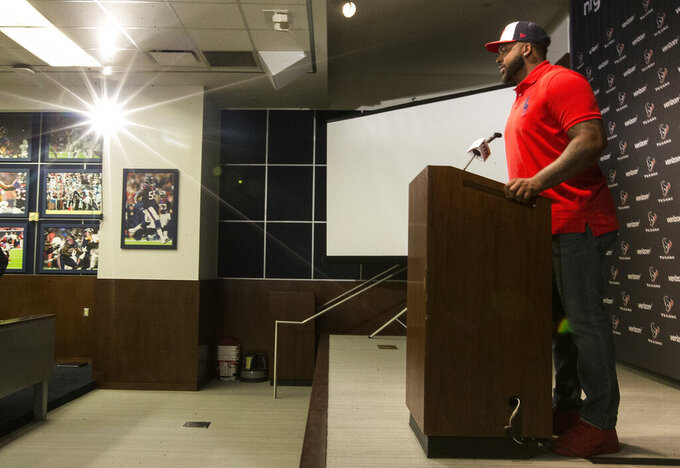 The Indiana native was bouncing around the junior college ranks and having trouble making the jump up to the next level.

"I almost gave it up at one point in junior college because I kept getting knocked down every step I tried to take," Johnson said. "Just stuck with it, ended up qualifying through school and got to Kentucky and ended up doing the right thing."

The work paid off after two years at Kentucky: Johnson was taken by the Houston Texans in the second round of the NFL draft Friday night at No 54 overall.

"It just shows that I work hard," Johnson said. "Everything that it took to get here, everything I've been through, I'm lost for words right now."

Johnson started 18 games for the Wildcats after a series of twists and turns. Originally, he committed to Ohio State but did not qualify academically. In 2014, Johnson played at San Bernardino Valley Community College before spending the next two years at Garden City Community College. His final two seasons were spent at Kentucky, where he had 64 tackles with 12 pass breakups.

This is the third straight season the Texans have addressed the cornerback position in the draft. Johnson will try and fill the voids left in the secondary with the exits of Tyrann Mathieu, who signed with the Kansas City Chiefs, and Kareem Jackson, who signed with the Denver Broncos.

The Texans also used two of their top three picks to shore up their porous offensive line and get Deshaun Watson some protection: Northern Illinois' Max Scharping (No. 55 overall) and first-rounder Tytus Howard of Alabama State will be asked to help protect the oft-banged up quarterback.

"I know he's one of the best quarterbacks in the league," Scharping said. "He's a great person to be able to protect for. He's athletic, he can move throughout the pocket and he's got a great arm. I can't wait to be one of the guys protecting him."

Howard was a quarterback in high school before growing into his 6-foot-5, 322-pound frame while Scharping is a 6-foot-6, 327-pound tackle who started in 53 consecutive games for the Huskies.

Scharping, who is a native of Green Bay, will get to head to his hometown next season when the Texans and Packers participate in a joint practice prior to their preseason opener. Scharping is also now teammates with fellow Wisconsin native J.J. Watt, who he watched growing up when he played at Wisconsin.

"Meets our prototypical standards, everything we look for," Texans general manager Brian Gaine said. "From the physical skillset and ending the with character and football skillset. Ton of upside here, a youthful player as it relates to his football experience but a ton of upside."

In high school, Warring played multiple sports, including water polo and basketball, which he said helped him transition to football.

The 6-foot-5, 252-pound tight end was always curious about playing football and never thought about getting drafted into the NFL when he made the choice.

"No, I was just enjoying the game of football falling in love with it day by day," Warring said. "I was just having fun with my friends."

The Texans will finish off the draft with three picks in the final four rounds on Saturday. Houston will have a single pick in the fifth (161st overall), sixth (195th overall) and seventh round (220th overall).