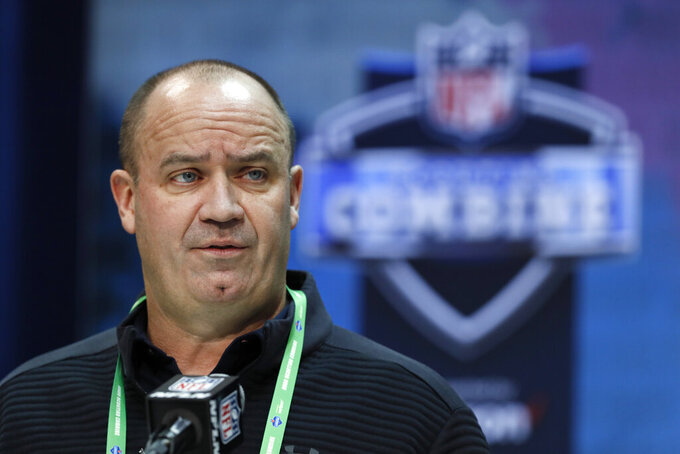 FIL - In this Feb. 25, 2020, file photo, Houston Texans head coach Bill O'Brien speaks during a press conference at the NFL football scouting combine in Indianapolis. The Houston Texans don't have a first-round pick in this year's draft after trading it to Miami last year as part of the deal for Laremy Tunsil and Kenny Stills. (AP Photo/Charlie Neibergall, File)

As Bill O’Brien prepares for his first draft as both coach and general manager of the Houston Texans, he isn’t sure how much any rookie will contribute this season with the nationwide sports shutdown because of the new coronavirus.

“I think that this year with the unique position that we’re in, I truly believe that this is a veteran type of year,” O’Brien said. “I think it’s going to be really difficult for rookies (to contribute) without offseason practicing on the field and being able to do all the things that you do during that five weeks stretch after the draft.”

O’Brien has worked as both the team’s coach and general manager since Brian Gaine was fired in June after less than 1 ½ years on the job. He was officially made general manager by team owner Cal McNair in January, not long after the Texans squandered a 24-0 lead in a 51-31 loss to Kansas City in the playoffs.

Now he’s getting ready for a most unique draft which will be done virtually because all NFL facilities are closed due to the pandemic. The Texans don’t have a first-round pick after shipping it to Miami last season in the package that brought left tackle Laremy Tunsil and receiver Kenny Stills to Houston in August.

Houston’s first pick in next week’s draft will come at No. 40, a pick the team received in the surprising deal that sent star receiver DeAndre Hopkins to Arizona last month. The Texans had the 57th pick, too, but dealt it to the Rams for receiver Brandin Cooks last week.

O’Brien said his team has plenty of needs, including on the defensive line and in the secondary, but need won’t be the overriding factor on who the Texans will draft.

“You’re going to draft on who is the best player for your team when you’re picking at that pick,” he said. “And if there are a bunch of players there that you think fit your team, then maybe you think about doing some other things within the draft.”

THE REST OF THE DRAFT

Along with the 40th pick, the Texans have six other selection. They have a pick each in the third (90), fourth (111) and fifth (171) rounds and three selections in the seventh round.

O'Brien was asked how the team will replace the production of Hopkins, who had 8,602 yards and 54 touchdowns in seven seasons with the team. Though the draft is chock-full of talented receivers, O'Brien indicated he likes the receivers on the roster and likely won't use a draft pick to get another one.

Houston signed free agent Randall Cobb before trading for Cooks, who has had four 1,000-yard receiving seasons in his first six NFL campaigns. The Texans also have Will Fuller, a first-round pick in 2016 who has great talent, but has struggled with injuries, and Stills, who had 561 yard receiving last season.

O'Brien calls NRG Stadium his “home away from home." So not being able to go there because of the coronavirus has forced him and his staff to make many adjustments as they evaluate players. He's done a number of FaceTime calls and video meetings as well as kept in near-constant contact with his staff by phone.

“They've adapted to this unique time and they're working hard and they've had a lot of good input into the draft," O'Brien said.

This won't be the only year the Texans won't have a first-round pick. They also sent next year's pick in the opening round to Miami in the Tunsil/Stills trade. They won't have a second-round pick in 2021 barring another trade after including that spot in that trade, too.