Houston's offense sputters after early lead in loss to 49ers 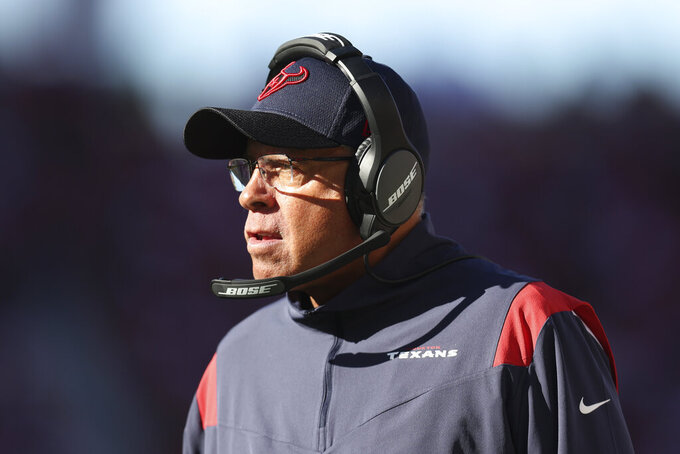 HOUSTON (AP) — The Houston Texans led by a touchdown early Sunday before being outscored 23-0 the rest of the way as their offense sputtered in a loss to the San Francisco 49ers.

Rookie Davis Mills threw for 163 yards with a touchdown and an interception as Houston’s two-game winning streak was snapped.

Houston (4-12) was clinging to a 7-3 lead in the third quarter when Marcell Harris intercepted Mills. It looked as if he lost the ball on a fumble on the play, but officials ruled his forward progress was stopped before he coughed it up.

Terrance Mitchell was called for pass interference on the next play to move the 49ers 37 yards. Trey Lance capped that drive when he connected with Elijah Mitchell on an 8-yard touchdown that gave San Francisco the lead for good.

“It was a big swing, a big momentum swing,” coach David Culley said.

Receiver Brandin Cooks, who returned after missing last week’s game on the COVID-19 list, was disappointed that the Texans couldn’t do much offensively after taking the lead.

“We simply didn’t execute and that’s where we have to grow at and continue to get better at playing complementary football,” he said.

While Mills struggled to move the offense in the second half Sunday, Culley believes he’s making progress with each start. Mills started six games early this season when Tyrod Taylor was injured, and Sunday was his fourth start since Taylor was benched.

“He’s very mature for a young quarterback and he is very focused,” Culley said. “I think that’s been the big thing that I’ve seen with him. His focus has been really good on just getting better at doing his job.”

Houston’s defense had an interception Sunday to give the team 17 this season, tied for eighth most in the NFL. It’s a marked improvement from the performance last season when the Texans ranked last in the league by finishing with three.

Culley credits the change in this area to defensive coordinator Lovie Smith, who has focused on creating more takeaways all season.

After rushing for a season-high 189 yards last week, the Texans were back to struggling in the run game Sunday. They managed 86 yards rushing against the 49ers, led by 47 from Rex Burkhead.

Houston ranks last in the NFL by averaging 84.9 yards rushing a game and has finished with 100 yards rushing just three times this season.

Desmond King had an interception in the second quarter Sunday to set up Houston’s only touchdown. The pick gives him three this season, which ties a career high.

TE Pharaoh Brown continues to pile up penalties each week. The third-year player had a holding call Sunday that negated a 50-yard reception by Cooks in the third quarter and was his 10th penalty this season.

S Justin Reid (ankle) and DL Jonathan Greenard (shoulder) were hurt Sunday and Culley said he didn't have any updates on their injuries Monday, but Reid was placed on the reserve/COVID-19 list later Monday. S Jonathan Owens (wrist) and and DB Grayland Arnold (ankle) were placed on the injured reserve Monday after being injured against the 49ers.

1,000 - Cooks had 66 yards receiving Sunday to give him 1,011 for his sixth 1,000-yard season. Cooks joins Andre Johnson and DeAndre Hopkins as the only players in franchise history to have consecutive 1,000-yard receiving seasons after he had 1,150 yards last season.

The Texans wrap up this dreadful season Sunday when they host AFC South champion Tennessee, which needs a win to clinch the top seed in the AFC. Houston upset the Titans 22-13 in the first meeting this season by tying a franchise record by intercepting Ryan Tannehill four times on a rainy day.

Mills will have to take care of the ball and Houston must find a way to run it if the Texans have any chance of pulling off another upset to finish the season.