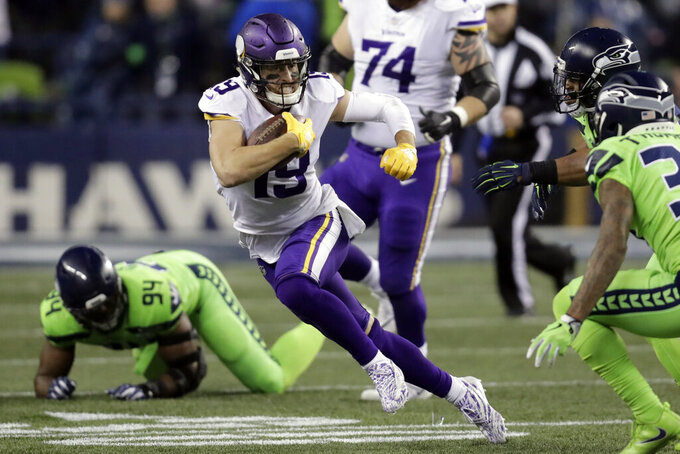 FILE - In this Dec. 10, 2018, file photo, Minnesota Vikings' Adam Thielen (19) runs with the ball after a reception against the Seattle Seahawks in the second half of an NFL football game, in Seattle. Thielen’s Thursdays usually are busy. The star wide receiver has a full practice with the Minnesota Vikings as they implement their game plan for the upcoming opponent. Thielen’s football those days isn’t limited to working out with his teammates, though. This season, he’s hosting “Thursdays With Thielen,” which basically is a chili-fest across the nation focused on the cuisine of cities teams playing in the Thursday night game represent. (AP Photo/Stephen Brashear, File)

Adam Thielen's Thursdays usually are busy. The star wide receiver has a full practice with the Minnesota Vikings as they implement their game plan for the upcoming opponent.

Thielen's football those days isn't limited to working out with his teammates, though. This season, he's hosting "Thursdays With Thielen," which basically is a chili-fest across the nation focused on the cuisine of cities teams playing in the Thursday night game represent.

Through a partnership with Hormel Foods, Thielen will oversee — and sample, of course — unique chili recipes created by notable chefs from across the land. It all starts with the kickoff to the NFL's 100th season on Sept. 5, when the Packers (think brats) visit the Bears (think pimento) .

"For me, Thursday night football is a great time for me to enjoy the game with my family, as I'm not able to watch as much on Sundays," Thielen says. "So the spirit of 'Thursdays with Thielen' with Hormel Chili is to provide fun and easy recipes for families to enjoy together while watching that Thursday night game. Family is so important to me and I hope to spend every minute with them. For me, it's simple: easy recipes equal more family time."

He even admits that the recipe chef Kenneth Temple came up with for the Packers —shh!, don't alert Vikings fans — sounds very tempting.

"Even though I shouldn't like this one, the Green Bay recipe ... the bacon-wrapped brat ... I loved, and we'll definitely make at home. But, my hometown Minnesota recipe with tots and cheese curds is still No. 1."

In addition to the culinary components of the campaign, "Thursdays with Thielen" will have a charitable tie-in. Throughout the NFL season, Hormel Foods will donate a yard of chili - equivalent to eight 15-ounce cans - to Second Harvest Heartland in the Twin Cities for every yard Thielen gains on the field.

"We are so excited to team up with the Thielen family and Hormel Foods on this unique campaign where Adam's on-field play will directly help feed the one in 11 Minnesotans who experience hunger," says Allison O'Toole, CEO, Second Harvest Heartland. "If Adam's stats are similar to last year's, that would equate to feeding more than 8,500 kids and families across the region."

Chefs such as Temple, who created four unique chili dishes for the championship game teams last January, and Chicago's Lamar Moore were challenged to fashion flavorful recipes that feature food prevalent in a team's region.

"Everyone does pizza and we have our favorites out here," says Moore, who in the past has worked for the Bears and has a popular Chicago restaurant, The Swill Inn. "That seems like the standard. Who doesn't want a Chicago-style hot dog done my way: 80 percent Angus, 20 percent brisket? I do have a BBQ background that plays into it.

Beyond the opener, several other dishes have been designed by a group of chefs. Temple alone has done shrimp and chili grits — say what? — for Tampa Bay, and chili cheese reaper fries for Carolina.

"I am food snob," Temple says with a hearty laugh. "I respect cultural backgrounds and heritage with their foods. We decided instead of just chili dips we would do a wider range of options.

"I guess the item that doesn't mix would be for Tampa Bay, which is known for Cuban sandwiches or margaritas. I didn't want to put any chili on there, which would be a bit odd.

"So we decided to jump off the edge and do chili shrimp and grits, with beans adding the extra texture. Maybe it's going to be weird to try, but they will like it once they try it. I do know football fans live on the edge more than other traditional U.S. sports fans. So there's a twist, but keeping it familiar. You don't want to go too far where people will not even be engaged with it and not even want to try it."

As for trying every recipe for each "Thursdays With Thielen," the Vikings star is game. Still, he and wife Caitlin have their own favorite.

"Hands down it's nachos," he says. It's a staple in our household."