Huntley giving Ravens reasons to believe in him 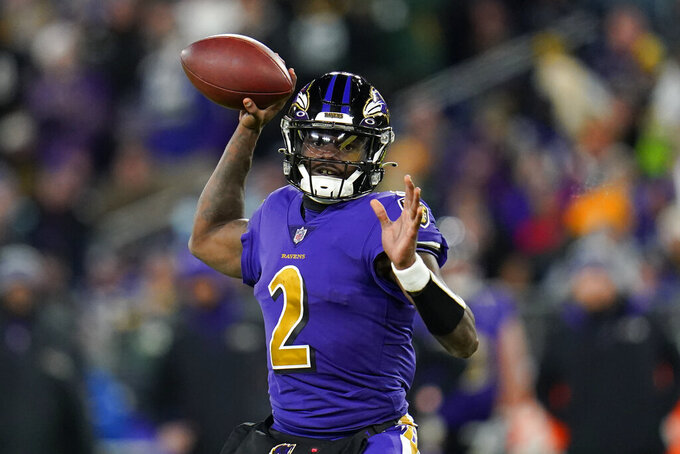 Baltimore Ravens quarterback Tyler Huntley throws to a receiver in the first half of an NFL football game against the Green Bay Packers, Sunday, Dec. 19, 2021, in Baltimore. (AP Photo/Julio Cortez)

The Baltimore Ravens are preparing for what's almost certainly the most important game of their season so far — a showdown at Cincinnati, with the winner taking over sole possession of first place in the AFC North.

Then again, when you're a 23-year-old quarterback with two career starts, all the games feel pretty big.

“Shoot, I feel like every game in the NFL is important,” the Ravens' Tyler Huntley said Thursday. “Not just this game, but the rest of the remainder of the games. We have to win to give ourselves the best opportunity to make the playoffs. And then once we get to the playoffs, it’s do or die each game.”

The Ravens certainly weren't planning on having Huntley start at this crucial juncture of the season, but Lamar Jackson's sprained ankle makes that a distinct possibility for a second week in a row. Jackson again missed practice Thursday.

If Huntley is pressed into service again, Baltimore can at least take solace in what he's done over the past game and a half — especially last weekend, when he rejuvenated the offense a bit in a 31-30 loss to Green Bay.

Undrafted out of Utah, Huntley attempted five passes during the regular season in 2020. Then the Ravens had to turn to him in their postseason loss at Buffalo when Jackson was knocked out of the game with a concussion.

Prior to this season, it wasn't clear whether Huntley or Trace McSorley would be Baltimore's top backup, but Huntley emerged and has given the Ravens more reasons to believe in him lately.

When Jackson was sick Nov. 21, Huntley guided Baltimore on a late touchdown drive for a 16-13 win at Chicago.

When Jackson hurt his ankle two weekends ago at Cleveland, Huntley nearly led a late rally. The Ravens lost 24-22. Then Huntley had to start against Green Bay, and he threw for two touchdowns and ran for two. He became the seventh quarterback going back to 1960 to throw for at least 200 yards and two TDs while also running for 70 yards and two TDs. Even Jackson hasn't done that.

“He’s a guy — and this is critical to any player coming into the NFL, and you can identify it fairly quickly — when some people make the invariable mistake or don’t do something the right way, what do they do next time?” offensive coordinator Greg Roman said.

"Do they learn from that? He’s been a guy who, as he’s young and he’s learning through this experience, which is really the only way to learn, he’s the guy that puts those things behind him and moves on to the next inevitable moment for a young player. He’s done a great job from learning from a mistake, or a misread, or a ball handling, or cadence or whatnot.

“It’s all part of the process of playing one of the biggest juggling acts of professional sports, which is playing quarterback in the NFL.”

“He fit the style of our offense,” Harbaugh said. “But not just that. All of his talent and ability ... we really respect it.”

The question now is how well Huntley can build on these past couple of weeks. Teams have more video of him now and may be able to prepare better.

“As he gains experience, I really feel like he’s going to continue to improve,” Roman said. “As good as he played last week, I know in his mind, with the competitor that he is, he’s looking to play a little bit better all the time. I think he’s a realist when it comes to that, but also, his confidence is definitely growing.”