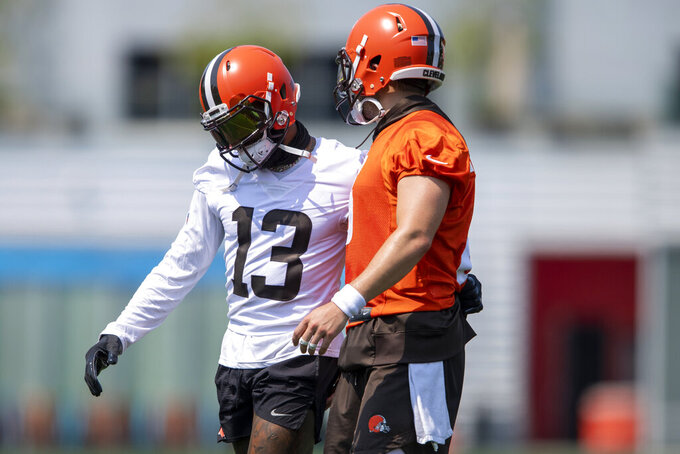 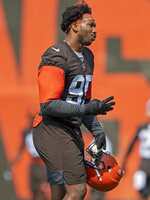 BEREA, Ohio (AP) — As Baker Mayfield rifled passes wide receivers to Odell Beckham Jr. and Jarvis Landry on one field, star defensive ends Myles Garrett and Jadeveon Clowney worked on their pass-rushing techniques on the other.

There was plenty of other action on Cleveland's opening day of training camp as the club's standout offensive line fine-tuned blocking protections as running backs Nick Chubb and Kareem Hunt stutter-stepped through drills.

No longer one of the NFL's worst teams, the Browns have undeniable talent.

With expectations soaring, and in some circles spiraling out of control, the Browns took the field Wednesday to begin a season that some Cleveland fans are daring to believe could end with a Super Bowl appearance.

After the team's 11-5 regular-season finish, wild-card win over Pittsburgh and close loss to Kansas City in the division round last season, all while navigating around numerous COVID-19 obstacles, the Browns are legitimate contenders.

But as Garrett and his teammates learned in 2019, when the team had similarly high hopes and crashed with coach Freddie Kitchens, nothing is given.

“We have to go out here, we have to put the work in and we have to grind,” Garrett said. "We have to make sure that chemistry is there for when we match up with the Chiefs in that first week. It all looks good, but we have to make it great out here day by day.”

Garrett has clearly listened to coach Kevin Stefanski, who has been preaching to his players to put 2020 and its challenges behind them.

Of course, it helps that everything Stefanski told them came to fruition last season, when the Browns ended the league's then-longest playoff drought, upset the Steelers at Heinz Field and and pushed the defending Super Bowl champion Chiefs to the brink before losing.

Stefanski was named the AP's coach of the year, and he began the 2021 camp reminding the Browns to stay focused.

“The message has been pretty simple,” Landry said before practice. “It’s the same one that it’s been since the first day he got here — work. It’s in the work. What we do is in the work, and that’s been the same telling us in team meetings, it’s all around the building. Every sign that we see that’s one of the words that’s on there.”

For the first time in a long time, the Browns have continuity.

Stefanski brings back his entire offense, which should evolve even more with Mayfield in his second straight season in the same system. Beckham appears fully recovered from a season-ending torn knee ligament suffered in October, and Cleveland's defense has been remodeled with the signings of Clowney, safety John Johnson III and linebacker Anthony Walker as free agents.

The Browns are loaded, and that's not just hype.

Stefanski has to make sure his team lives up to it. He also understands the perils of listening to outside noise.

“This league is really competitive,” he said. "There are some great teams. There are great coaches. Year in and year out, it is hard, and we get that. That is where our guys are up to the challenge.

"We are not going to think too much or think too far ahead of ourselves. Totally recognize that this league is difficult. You will get reminded every once in a while of how difficult it is. The guys understand this is a long season, and part of getting ready for that long season is putting some really good work in early as we get started.”

If there were any questions about Beckham's health, he answered them.

The former Pro Bowler made precise cuts on pass routes and didn't show any effects from his surgery nine months ago while taking part in almost every phase of the workout before sitting out the final 7-on-7 drills.

“We will bring him along at the discretion of the doctors, our medical team and Odell and see how he is feeling,” Stefanski said before the workout.

The Browns got a minor scare on Day One as cornerback Greedy Williams was forced to leave the field with what the team described as a “heat-related” issue.

Later, Williams posted on Twitter that trainers pulled him off for looking “suspicious.”

Williams missed all last season with a nerve injury in his shoulder, and he's competing this summer with first-round pick Greg Newsome II for a starting job.

NOTES: Garrett applauded Olympian Simone Biles for her “courage” in bowing out of competition due to mental-health concerns. “It hurts to see that as a competitor,” he said. "I wanted her to go through it, tough through it. But as a person, as a human being, you gotta be able to know when you reached your limit and you’ve got to be able to empathize with that.”... Rookie LB Tony Fields is sidelined after injuring his foot leading up to camp. Field was held out of mini-camp with an injury to the opposite foot.