Iconic lines, other info on sports movies in the AP Top 25 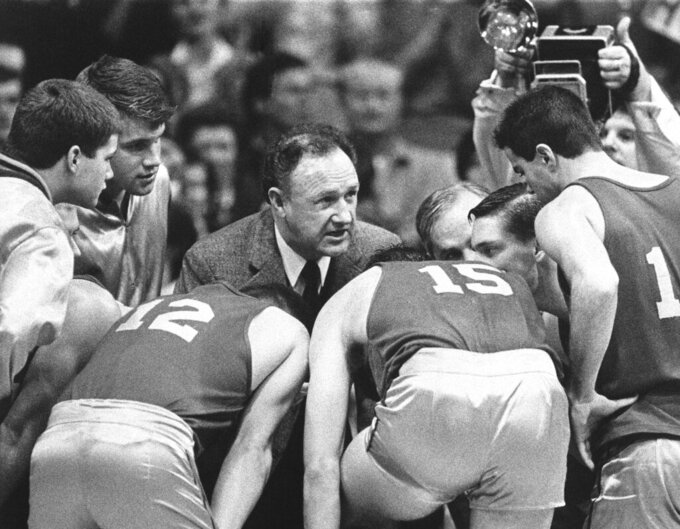 FILE - In this Dec, 6, 1985, file photo, actor Gene Hackman gives fictional Hickory High basketball players instructions during filming of the final game of the movie "Hoosiers" at Hinkle Fieldhouse on the Butler University campus in Indianapolis. “Hoosiers” shot all the way to No. 1 in The Associated Press Top 25 of best sports movies, a one-of-a-kind poll from the news organization known for its rankings of college teams. Released in 1986 and starring Gene Hackman, “Hoosiers” led the tally in results released Friday, April 17, 2020, receiving 46 votes from a 70-person global panel of sports writers and editors who work for the AP. (AP Photo/Tom Strickland, File)

A look at iconic lines and other key information about the sports movies that made the AP Top 25:

Plot: A coach with a shaky past (Hackman) and his assistant who’s a drunk (Hopper) take a small-town high school basketball team in 1950s Indiana to the state tournament.

Plot: The lives of a career minor leaguer (Costner), a young, wild pitcher (Robbins) and a local fan (Sarandon) intertwine.

Iconic Line: “The only church that truly feeds the soul, day in and day out, is the church of baseball.” -- (Sarandon)

Plot: A small-time boxer (Stallone) living in Philadelphia gets a shot at the heavyweight championship.

Plot: A brash new member (Dangerfield) shows up at an exclusive golf course, which employs a gopher-chasing groundskeeper (Murray).

Iconic Line: “You’ll get nothing and like it.” -- Judge Elihu Smails (Knight)

Plot: An Iowa corn farmer (Costner) hears voices, clears his crop to build a baseball diamond and gets a visit from the 1919 Chicago White Sox and a few others.

Iconic Line: “If you build it, he will come.” -- Voice from the corn fields

Plot: Based on the life, in and out of the ring, of boxing champion Jake LaMotta (De Niro).

Plot: The Cleveland Indians win despite a new owner (Margaret Whitton) who wants to sabotage and relocate the team.

Screenwriters: Roger Towne, Phil Dusenberry; based on a novel by Bernard Malamud

Plot: Years after getting shot while he was a young prospect, Roy Hobbs (Redford) makes it to pro baseball with hard-to-believe talent.

Iconic Line: “I coulda broke every record in the book. ... And then when I walked down the street, people would’ve looked and they would’ve said, ‘There goes Roy Hobbs, the best there ever was in this game.’” -- Hobbs (Redford)

Plot: The true story, based on the book by Michael Lewis, of how Oakland Athletics general manager Billy Beane used analytics to take advantage of market inefficiencies and built a successful baseball team despite a low payroll.

Plot: An alcoholic former minor league baseball player (Matthau) coaches a team made up of a ragtag band of misfit kids.

Plot: Based on the book by Eliot Asinof about the Black Sox scandal, when “Shoeless Joe” Jackson and the Chicago White Sox were accused of throwing the 1919 World Series.

Plot: The fact-based story of two runners — one Christian, one Jewish — who compete in the 1924 Olympics.

Iconic Line: “I’ve known the fear of losing, but now I am almost too frightened to win.” -- Olympian Harold Abrahams (Cross)

Plot: A couple of basketball hustlers (Snipes, Harrelson) team up.

Plot: Based on the true story of Herman Boone (Washington) and his attempt to integrate a Virginia high school football team in the early 1970s.

Iconic Line: “I don’t care if you like each other or not. But you will respect each other.” -- Boone (Washington)

Plot: Based on Laura Hillenbrand’s book, the true story of undersized and crooked-legged Seabiscuit, who captivated the sports world in 1938 and became a symbol of hope during the Great Depression.

Iconic Line: “You know, everybody thinks we found this broken-down horse and fixed him, but we didn’t. He fixed us. Every one of us. And I guess in a way we kinda fixed each other, too.” -- Jockey Johnny “Red” Pollard (Maguire)

Plot: The story of four working-class friends who are recent high school graduates in Indiana, including one obsessed with Italian cycling.

Iconic Line: “I thought that was the whole plan -- that we were going to waste the rest of our lives together.” -- Cyril (Stern)

Plot: Based on the life of baseball Hall of Famer Lou Gehrig (Cooper), the New York Yankees star who died at age 37 from amyotrophic lateral sclerosis.

Iconic Line: “Today, I consider myself the luckiest man on the face of the Earth.” -- Gehrig (Cooper)

Plot: Documentary about “The Rumble in the Jungle,” the 1974 heavyweight championship fight in Zaire between champion George Foreman and challenger Muhammad Ali.

Iconic Line: “Last night, I cut the light off in my bedroom, hit the switch and was in the bed before the room was dark.” -- Muhammad Ali

Plot: The evolution of the real-life friendship between Chicago Bears teammates Brian Piccolo (Caan) and Gale Sayers (Williams) and the bond they form after Piccolo learns he has terminal cancer.

Iconic Line: “I love Brian Piccolo. And tonight, when you hit your knees, please ask God to love him.” -- Sayers (Williams)

Plot: Based on the book by Buzz Bissinger, about a high school football team and the Texas town obsessed with it.

Iconic Line: “Gentlemen, the hopes and dreams of an entire town are riding on your shoulders. You may never matter again in your life as much as you do right now.” -- Coach Gary Gaines (Thornton)

Plot: Coming-of-age story about a group of baseball players in the summer of 1962.

More on the AP Top 25 poll of sports movies: https://apnews.com/Sportsmovies