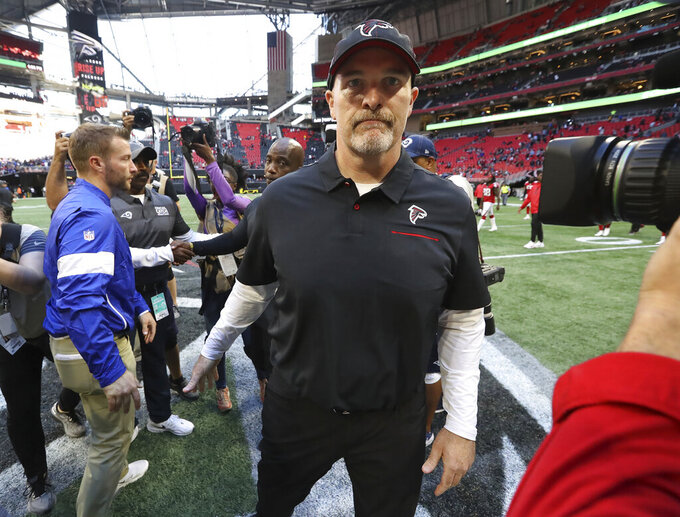 It was a fitting form of protest, given the circus that NFL officiating has become, game after game, week after week: A trio of spectators wore clown makeup and black-and-white striped jerseys in the stands at the Detroit Lions' home game against the Minnesota Vikings.

Other fans who wore officials' shirts accessorized the ensemble with ski masks, as if setting out to commit a robbery. Folks in the crowd booed during the pregame coin toss. And they booed some more when the first yellow flag flew, a week after the Lions were hurt by some questionable calls of illegal hands to the face.

"You can ask the refs if it affects them. I don't know," Detroit quarterback Matthew Stafford said about the jeering Sunday after his team was beaten by Minnesota 42-30. "But I think they're pretty used to it, probably, too."

Here is what players, coaches and fans are getting used to: hard-to-understand rulings, followed by inscrutable explanations coming from the league office.

Coaches are generally afraid to say what they really think about the matter, which is why Bill O'Brien said this — twice — after an in-the-grasp call he didn't like in his Houston Texans' 30-23 loss at the Indianapolis Colts: "I'm not going to answer any officiating questions."

And players know what can happen if they dare utter what they believe.

Los Angeles Rams linebacker Clay Matthews reportedly was fined after tweeting about what he considers the officials' "inability to make the accurate and correct calls" and how the NFL's head of officiating, Al Riveron, "continues to blindly side with his refs and the current status quo."

Here are other top topics after the seventh Sunday of the NFL season:

Not too often that a game ball recipient wasn't even on hand for the game, but 49ers coach Kyle Shanahan chose to offer that ceremonial honor to his father, Mike, after San Francisco beat the hapless Washington Redskins 9-0 on a rainy afternoon. Why? Well, the Shanahans were fired by the Redskins — Mike was head coach; Kyle ran his offense — in 2013 and it was a less-than-amicable parting. "It was a game we wanted to win for (Kyle) and Mike Shanahan," Niners tight end George Kittle said, "and it was really fun that we could get that for him."

With a little more than a week to go until the Oct. 29 NFL trade deadline, it's time for a few teams whose seasons are lost causes to be smart about things and get what they can for whatever (little) of value they have on the roster. Let's start with the most obvious candidates for sell-offs: The Miami Dolphins (0-6) and Cincinnati Bengals (0-7) are both winless under rookie head coaches and heading nowhere fast. There might not be a ton to work with, but they surely can find a buyer or two for some assets. Next up are two clubs that are 1-6 with nothing to play for: The Redskins already have fired coach Jay Gruden, and it seems to be only a matter of time until the Atlanta Falcons do the same with Dan Quinn, even if he did take them to the Super Bowl. It makes zero sense at all for Washington to hold onto left tackle Trent Williams, who is holding out; they need to start all over yet again. Other teams that should consider unloading a veteran or two in exchange for a draft pick or two include the New York Giants, who at least have Daniel Jones to rebuild around, and the Denver Broncos, who appear to be in real trouble.

If playoff contenders such as the New Orleans Saints, who are now 5-0 with Teddy Bridgewater starting in place of an injured Drew Brees, or the Colts, who somehow have managed to go 4-2 after Andrew Luck retired in the preseason — and can we just agree right now that Sean Payton and Frank Reich deserve all of the Coach of the Year votes? — want to see proof that making a swap can pay immediate dividends, they need look no further than the Los Angeles Rams and Baltimore Ravens. The Rams picked up cornerback Jalen Ramsey from the Jacksonville Jaguars and, thanks in part to his miraculous recovery from a bad back (insert eyeroll emoji here), his debut featured a forced fumble, four tackles and some serious defense against premier receiver Julio Jones in a 37-10 victory over imploding Atlanta. The DB jettisoned by the Rams because they added Ramsey, Marcus Peters, also made quite an impression on his new team, the Ravens. He scored his fifth career pick 6, a 67-yard return after intercepting Russell Wilson in Baltimore's 30-16 win at Seattle.