Iffy path ahead for Steelers with Rudolph's status uncertain 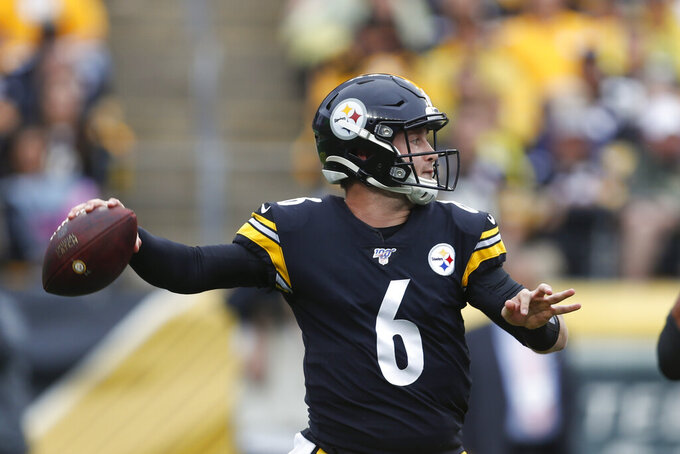 Pittsburgh Steelers backup quarterback Devlin Hodges (6) prepares to throw against the Baltimore Ravens in the second half of an NFL football game, Sunday, Oct. 6, 2019, in Pittsburgh. (AP Photo/Don Wright)

Rudolph's upbeat appearance drew a collective sigh of relief from his teammates. Though he remains in the concussion protocol, the big picture outlook for Rudolph's recovery looks promising. It's harder to say the same about his team's season.

Though Devlin Hodges filled in capably after Rudolph exited in the third quarter on Sunday — twice leading the Steelers on go-ahead scoring drives — JuJu Smith-Schuster's overtime fumble helped the Ravens escape with a 26-23 victory and left Pittsburgh at 1-4 heading into a visit to the Los Angeles Chargers next weekend.

Save for a Week 1 blowout in New England, the Steelers have been competitive regardless of who is at quarterback regardless of their pedigree. Their past three losses are by a combined nine points, and in two of them they led deep into the fourth quarter. Yet they were unable to close out San Francisco and Baltimore, done in by a series of self-inflicted mistakes.

Smith-Schuster's fumble off a well-timed strip by Baltimore's Marlon Humphrey set up the winning score on Sunday. It was similar to what happened in San Francisco in Week 3, when James Conner's fumble deep in Pittsburgh territory allowed the 49ers to somehow survive on a day they gave it away five times.

It's not that the Steelers haven't been good. They just haven't been quite good enough, even after the defense responded to coach Mike Tomlin's decision to kick off in overtime against the Ravens rather than take the ball. Baltimore went nowhere and punted, just as Tomlin planned. It was a massive vote of confidence for a unit that began the year as a major question mark. The time, however, for moral victories has come and gone.

"There's no solace in that because all we're worried about is outcomes," defensive tackle Cam Heyward said. "We don't care if it's ugly, pretty, as long as we get a winning outcome. We're going to circle the wagons and get better."

And they might have to do it — for the time being at least — with a 23-year-old quarterback from Kimberly, Alabama (population 3,173) who was brought in as a "camp" arm in the offseason and now finds himself as the most likely option if Rudolph isn't cleared in time to face the Chargers.

"I feel like I know the offense," said Hodges, who completed 7 of 9 passes for 68 yards and also added a 21-yard scramble. "I just went out there and executing when depending on what play is called. I have always been a guy who is aggressive in throwing the ball and what not."

Hodges played with a fearlessness he'll need to rely on if he walks onto the field with the starters in Los Angeles. Whatever margin for error the Steelers had is now gone.

The defense sacked Lamar Jackson five times and created three more takeaways, exactly the kind of splash plays the Steelers focused on during the offseason. Pittsburgh has created 12 turnovers in five weeks, just three fewer than it created all of last year.

For as solid as the defense looked over the last 40-plus minutes against Baltimore, it was just as shaky over the first 20 minutes as the Ravens raced to a 17-7 lead. Linebacker Bud Dupree chalked it up to communication issues that plagued the Steelers early in the season. The issues were ironed out eventually, but asking an offense still trying to figure things out to claw out of multiple 10-point deficits is a dangerous habit to get into.

Safety Kam Kelly looked to be overmatched when he was thrust into the starting lineup in the opener against New England. Things have slowed down considerably over the past month. Now playing exclusively in sub packages rather than starting, Kelly picked up his first NFL interception when he got his hands on Jackson's pass in the second quarter.

Life comes at you fast in the NFL. Look no further than Jaylen Samuels for proof. The running back's play while working out of the wildcat in a romp over Cincinnati last Monday helped the Steelers roll to a 24-point win. Sunday, he was a non-factor. He collected just 17 yards of total offense and an ill-advised pass attempt out of the wildcat gave the Ravens the ball deep in Pittsburgh territory.

Wide receiver James Washington's left arm was in a sling on Monday. Washington injured his shoulder while catching a 26-yard pass on the play Rudolph was drilled by Thomas.

1 — The number of times in Pittsburgh's past 12 games the Steelers have gone over 100 yards rushing dating back to last season. Pittsburgh is 4-8 over that span.

Hope the spark Hodges showed while filling in for Rudolph wasn't a mirage. Pittsburgh has struggled on the West Coast recently but beat the Chargers in San Diego in 2015 in a game in which Michael Vick started in place of Roethlisberger.