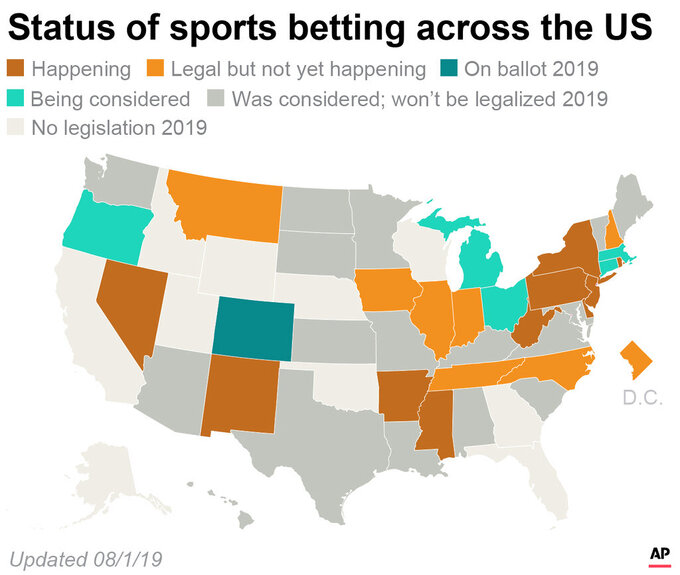 The status of sports betting in each state.;

INDIANAPOLIS (AP) — Indiana casinos are racing ahead with preparations to launch legalized sports betting in early September, looking to seize an advantage over competitors in Chicago and other nearby large markets where such wagers aren't yet allowed.

All of Indiana's 13 state-licensed casinos and three off-track betting parlors are gearing up for on-site sports wagering. Most say they expect to be taking bets by the time the NFL season starts on Sept. 5. They also are working to launch online betting apps, but those may not be ready until later in the fall.

Caesars Entertainment will have dedicated sports wagering areas at its casino in Hammond, near Chicago, at its two casinos near Indianapolis and at its casino near Louisville, Kentucky.

Caesars regional president Dan Nita said the company hopes to gain an advantage with a quick start and to attract gamblers to its Hammond casino before sports betting is available in Illinois, where the Legislature approved it in June.

"There is definitely a first-mover advantage, there is also knowing that the NFL football season is the most popular sport to wager on," Nita said. "The timing of it makes sense for us to get up and running as expeditiously as possible."

Sports wagering is expected to start Aug. 15 in Iowa, which would make it the 11th state to allow sports wagering since the U.S. Supreme Court cleared the way with a decision last year.

Most of Indiana's casinos are clustered along Lake Michigan and the Ohio River, so those operators also see a chance to make headway with gamblers from Michigan, Ohio and Kentucky, which haven't legalized sports betting yet.

Sports wagering generally results in slim profit margins for casinos. An Indiana legislative report projects that the state will collect only about $13 million a year in revenue from its 9.5% tax on the casinos' sports bets winnings. That compares to about $430 million in wagering taxes collected during the past year from the casinos for slot machines and table games such as blackjack.

Indiana's casinos have seen wagering shrink over the past decade in the face of more competition from Illinois, Michigan, Ohio and tribal casinos, so they don't want to miss out on a sports betting edge.

Boyd Gaming is looking to replicate the success it had drawing more gamblers with sportsbooks at its Mississippi and Pennsylvania casinos when it begins offering the service at its Blue Chip casino near Indiana's border with Michigan and at its Belterra casino on the Ohio River near Cincinnati.

"We're hopeful that it will draw in customers from throughout those properties' markets, including Michigan and Kentucky," Boyd Gaming spokesman David Strow said.

The Indiana Gaming Commission is expected to vote Aug. 28 on whether to approve its proposed sports betting regulations. The agency has already granted temporary licenses for three off-track betting sites and 10 casinos, with the operators of Indiana's other three casinos saying they also expect to have sportsbooks operating in early September.

Indiana law and regulations will allow sports wagering by anyone 21 or older at a casino or by mobile devices after a bettor has registered with a casino in the state. Those online apps, however, are only allowed to operate within the state borders, meaning any Chicago residents would have to cross into Indiana each time they wanted to place a bet using their cellphone.

The Indiana casino companies haven't set dates for when mobile wagering will start.

That step is expected to provide a major boost to sports betting, as the gaming commission projects that at least two-thirds of wagers eventually will be placed online or via smartphones. That figure could be even higher, as 80% of sports bets in New Jersey are placed those ways.

"The timing is really up to the operators," said the commission's executive director, Sara Gonso Tait.