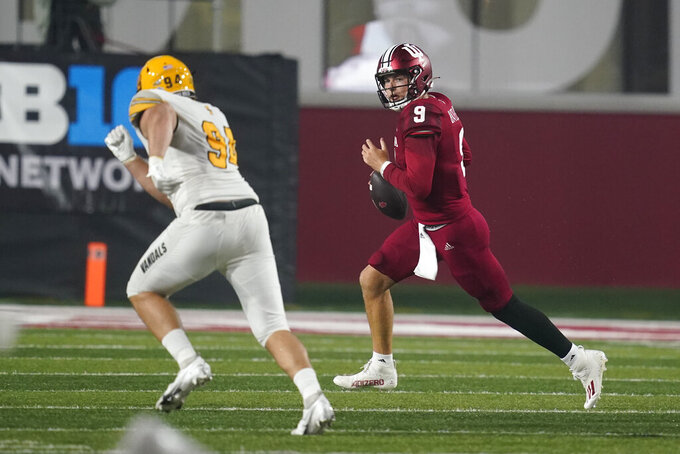 Line: Indiana by 6 1/2, from FanDuel Sportsbook.

Last year, the Hoosiers survived a scare in Bowling Green, Kentucky. This time, coach Tom Allen's squad is trying to keep its momentum before resuming Big Ten play and a win over this high-octane offense would help. Western Kentucky, meanwhile, has established itself as a dangerous opponent for Power Five schools. This season, the Hilltoppers have already blown out Hawaii on the road and with two weeks to prepare for Indiana hope to prove they are legitimate road warriors.

Western Kentucky's passing game vs. Indiana's secondary. With the star of last year's aerial show, Bailey Zappe, off to the NFL, Austin Reed has taken command of the Hilltoppers. He's already thrown for 547 yards and seven touchdowns while working with dynamic receivers Malachi Corley and Daewood Davis, both NFL hopefuls. Reed led West Florida to the 2019 Division II national championship. Indiana certainly haven't forgotten last year's game and knows it must be fully prepared to slow down an offense scoring 43.5 points.

Western Kentucky: RB Davion Ervin-Poindexter. The team's top rusher may not be the focal point of this pass-first system. But it will be quite a homecoming for Ervin-Poindexter, who grew up in northwestern Indiana, attended high school in Chicago and started three games during a three-year career with the Hoosiers. He'd certainly enjoy it more with a strong performance in a victory.

Indiana: LBs Aaron Casey and Dasan McCullough. This duo has made been quite a hit over the first two games. Yes, they've played well individually. McCullough, a true freshman, has 11 tackles, 2 1/2 tackles for loss and two sacks in his first two college games. Casey has 13 tackles, three TFLs and 1/2 sack. But together, they're becoming a two-man wrecking crew.

Western Kentucky is 0-8 against Big Ten schools since joining the FBS in 2007. In addition to a winless mark against Indiana, the Hilltoppers are 0-2 against Illinois and 0-1 against Wisconsin and Michigan State. ... The Hoosiers are 13-1 against non-conference foes and 7-1 against non-conference foes at home during Allen's six-year tenure. ... Indiana WR D.J. Matthews Jr. has caught a TD pass in each of the Hoosiers' two games. He suffered a season-ending anterior cruciate ligament injury in last year's contest at Western Kentucky. ... The Hilltoppers have 10 takeaways this season, second-most in the FBS. Only Nevada (11) has more. ... Hoosiers RB Shaun Shivers rushed for a career-high 155 yards and one TD in Week 2. He was one of three Indiana players with scoring runs in the victory over Idaho.